Sarah Moore is one of the well-known female race car drivers. She has been racing since the age of eight. Moreover, the racer is a formidable competitor in the track with her speed and driving styles. In addition, her ability to remain calm-headed and focused in extreme situations is fascinating and phenomenal.

The sportswoman has participated in 119 races and won nineteen of them as of July 2021. She is the champion of the 2009 Ginetta Junior Championship. Furthermore, the race driver is the first female race car driver to win a TOCA organized race in its overall history. She has also secured several victories under her belt.

So, let's get to know more about Sarah Moore in this biography.

The player was born on October 22, 1993, in Harrogate. She was born into a racing family who shared a love for motorsports. Moreover, Sarah Moore's father, Simon Moore, is the former kart racer and owner of the Tockwith Motorsports Team. He has been supporting his daughter since the beginning of her career. Additionally, the racer's mother also encouraged her to pursue a racing career. 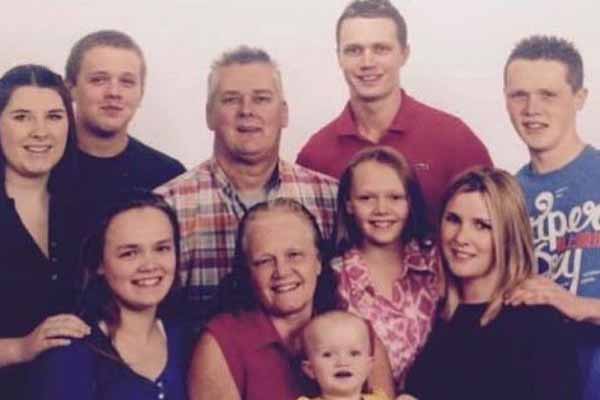 The sportsperson began her race career from a young age. As such, she gave more priority to her practices rather than academics. Still, Sarah must have completed her high school education in her own hometown. Furthermore, there is not much information about her college years.

Aforementioned, the athlete's family owned a motorsports team and kart racers, so the notion of racing came to her naturally. Moreover, she was fascinated by karts and cars from a young age and began karting at four. Furthermore, she had her first match at the 2006 Kartmasters British Grand Prix. 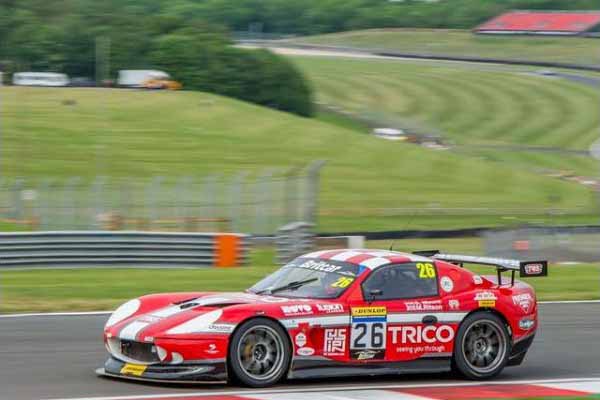 The touring car racer made her comeback at the 2007 Playstation Ginetta GT Junior Championship. She participated in three races and ranked twenty-sixth at the end. Moreover, Sarah upped her game in the 2008 season of the Ginetta Championship. She competed in twenty-four races and finished in the seventeenth position with her Ginetta G20.

The driver also appeared in the 2010 Ginetta Junior Championship. She joined the Eurotech Racing team and participated in twenty races. But, sadly, the champion couldn't defend her title and finished the game in the seventh position.

Sarah Moore competed in all TOCA-sanctioned tournaments and moved to compete in the International racing series. She performed in the first season of the 4Two Cup in 2011. However, the former champ couldn't gain a victory in the match. She also participated in the 2011 Intersteps Championship with her family's team TMS Atlantic. Moreover, the sportsperson competed in twenty races with Mygale FB02 (BMW) and finished in the sixth position.

The British race car driver made a remarkable comeback at the 2014 VLN Endurance. She joined Vantage Motorsports and drove Toyota GT86 Cup. Furthermore, the racer competed in five races, did five fastest laps, four pole positions, and won two races. But, unfortunately, she couldn't win over Maciej Dreszer, who won the match. As a result, Sarah joined her brother Nigel Moore in the second position.

The athlete has competed in many championships over the years. Some of the races with her rankings are listed below:

Sarah Moore made her career's biggest win at the 2018 Dunlop Endurance Championship. She became a winner alongside fellow British racer Matt Greenwood. Moreover, the duo gained victory by defeating the team of Tom Barley and Simon Rudd.

Afterward, the champion got drafted by the W Series to compete in their first season. It also began her career in formula racing championships.

Sarah Moore changed her touring car career to a formula sports car racing with W Series. It was created with a vision of establishing female car drivers in the same vicinity as male race drivers. Additionally, the series also has a motive to help fulfill their female competitors' Formula-One dream.

The British racer made it into the top ten list at the 2019 W Series - Assen. She finished in tenth place with her Tatuus F3 T-318. Afterward, the former champion further improved her performance at the 2019 W Series. Her racing was incredible for a newbie in formula racing, with quick turns and fast paces on the track. But, sadly, Sarah Moore could only finish the competition in the eighth position.

The touring car racer also competed in the 2020 W Series Esports League. She ranked ninth with 171 points in the game. Furthermore, the 2020 W Series was canceled by the organizers due to the Covid-19 pandemic. It brought disappointment and sadness among all of the participants.

Moore, in particular, faced a severe impact from the cancellation of the championship. She couldn't go through with her regular job of coaching and race-car instructor. As a result, the player had to work as a delivery person during the lockdowns to earn money. In addition, she had to postpone her wedding twice.

Even after confirming the 2021 W Series, Sarah could not buy a helmet with her salary. As such, she reluctantly set up a GoFundMe page to ask for monetary help. Thankfully, the athlete's fans helped raise more than $4K (£3000), which helped her get a new helmet. 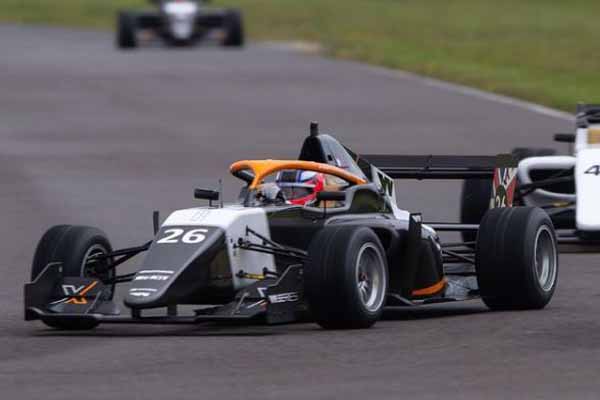 The second round was on July 2, 2021, in Spielberg, Austria. The reigning champion Jamie Chadwick made a solid return after the crash in the last game and became the winner. Furthermore, she was followed by Russian racer Irina Sidorkova and Finnish driver Emma Kimilainen. Sadly, Sarah Moore finished in the fourth position after going neck-to-neck with Bruna Tomaselli.

Still, the total points of both the first and second round have placed the sportsperson in a second position. Moore is followed by Alice Powell, with Jamie Chadwick in the lead. Furthermore, Sarah Moore is all pumped up for the third round in her native country. It is going to be on July 16-17, 2021, in Silverstone.

During a qualifying session for the ongoing W Series, Sarah Moore was involved in a high-speed crash with five other drivers. Moore along with Fabienne, Abbie, and Belen were deemed ok after undergoing medical assessment.

However, two drivers, Ayla Agren and Beitske Visser were taken to the hospital for further checkups. Thankfully none of the racers suffered serious injuries and the qualifying was resumed and Chadwick took pole position.

Sarah Moore Net Worth And Earnings

The touring car racer has been racing for more than a decade. As a result, she has earned both fame and fortune from her career. So, Sarah Moore's net worth mainly comprises her earnings from her racing competitions. In addition, it includes her signing deals and prize money. Besides that, the formula three driver also gets her income from brand endorsements.

The W Series had a total prize fund of $1.5 million in its 2019 season. It was distributed among all twenty drivers, with the champion receiving $500,000. As a participant, Sarah also received her share in the former season. Moreover, if Moore wins, she might earn prize money of a similar range in the 2021 W Series.

Alongside racing, Sarah Moore also benefits from her endorsements and brand deals. She is an ambassador of Rokit and Racing Pride UK. Moreover, the formula racer is endorsed by MSL Motorsport, Costa Coffee, Trico, Tokyo Time, GIgs, Porsche GB, In2Racing, etc. She helps to promote the products on her Instagram account.

PUMA Motorsport customizes the racer's racing suit. Her new helmet is also custom-made by Nicky Grist Motorsports. Additionally, ATWare Design and SFX Designs airbrushed her helmet. It also consists of stickers of an elephant and a tiger dedicated to her fiancee.

Thus, Sarah Moore's net worth must be rising over the years with her multiple brand deals.

Engaged And Waiting For Wedding

The athlete has shown her racing prowess in many competitions across the globe. Alongside career success, she has also been lucky in her relationships. As a result, Sarah Moore has been dating her partner, Carla Jane Metcalfe, for several years. Additionally, the pair got engaged in January 2018. But sadly, their marriage has been postponed two times. 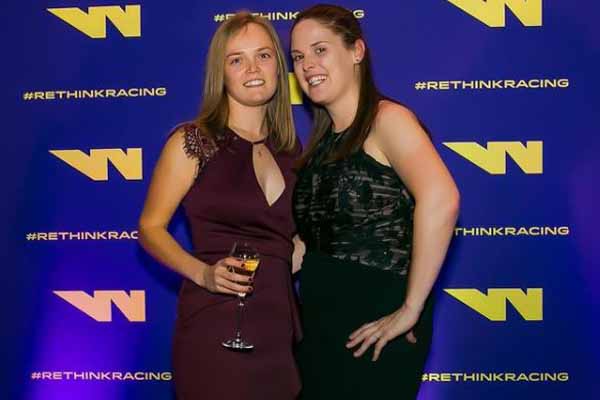 Sarah Moore's fiancee Carla Jane Metcalfe attends most of her races and cheers for her. Photo Source: Sarah Moore's Instagram.

The W Series race car driver has always been open about her sexuality in public. She also received support from her family after coming out, which further developed her self-esteem. Moreover, Sarah Moore's fiancee, Carla Metcalfe, is also proud of her identity as a lesbian and fully supports the LGBTQIA community alongside her. Furthermore, the lovebirds share each other's pictures on their Instagram accounts with great loving captions.

Sarah Moore is currently enjoying a comfortable life with her soon-to-be-wife, Carla Metcalfe. However, she hasn't lost her formula-one dream despite facing many setbacks in her career. Moreover, the sportsperson is training hard to win the title from the reigning champion Jamie Chadwick in the 2021 W Series. Hopefully, she will succeed in her future without suffering any crashes.