Ferrari has talented drivers like Charles Leclerc and Carlos Sainz Jr., who are competing against other racers with immense talents, including Max Verstappen from Red Bull Racing in the 2022 F1 Championship. A correct strategy of tires helped the latter win the 2022 Hungarian GP, where he beat earlier mentioned racers. With Verstappen's win, one person that came into the limelight was Hannah Schmitz.

Hannah is one of the few women serving in a top position in the top class. She currently works as the principal strategy engineer of Red Bull Racing. Despite gaining immense fame, she has kept most of her personal details away from the media. Furthermore, many might be curious to know about her. Thus, stick with us till the end to learn some interesting facts about Schmitz.

Hannah Schmitz Net Worth And Career

Hannah graduated with a Master's degree in mechanical engineering in 2009. Upon graduation, she joined Red Bull Racing, where she is continuing to serve till now. Also, she has worked as a strategist for different racers and helped them achieve good results. So, she must have earned considerably in her career. Thus, Hannah Schmitz's net worth must be a notable amount.

In November 2009, Schmitz began working as a modeling and simulation engineer for Red Bull Racing and Red Bull Technology. During that time, she did research and developed new simulation techniques. She also gained knowledge of optimization solvers and algorithms. Furthermore, the uni graduate was able to enhance her MATLAB skills and was even exposed to several programming languages.

Then, in April 2011, Hannah was promoted to Senior Strategy Engineer. Her responsibilities included conducting live race strategy and competitor analysis under a high-pressure environment during several Formula One events. Furthermore, the strategist also developed software algorithms and tools to aid live race strategy. She served in the position for a decade.

In May 2021, Schmitz began working as a Principal Strategy Engineer. She is a good decision maker even during adversity and chaos. Well, it's not just her job; she also gets help from several of her colleagues in the Red Bull Factory in Milton Keynes, England. Her priority is Max Verstappen, and her strategies and decisions have helped the latter win several races. In one interview, Hannah revealed that she has to make decisions within seconds before making sure whether it turns fruitful or not.

Hannah was one of the reasons behind Max's victory in Hungary in 2022 and was praised by the racer and team principal. She has been a key member of the team to get points in races. In the 2019 Brazilian GP, she helped Max win the championship and even stood on the podium alongside him.

Talking about Hannah's salary, the precise amount has not been revealed yet. As per Comparably, the average earnings of a Red Bull principal engineer is $154K. So, Schmitz must be making a substantial income from her professional career. As a result, Hannah Schmitz's net worth must be a commendable sum.

Is Married With Two Kids

Professionally, Hannah has made a good name for herself. Likewise, she also gained significant fame after contributing to Verstappen's victories in 2019 and 2022. However, she seems to have kept her personal life away from the media limelight. Therefore, many racing fans must be curious to know about the strategist's love life.

Well, the Red Bull principal strategy engineer is a married woman. She shares a blissful marital life with Markus Schmitz. However, it is not known when and where the couple met. Furthermore, the information regarding how their relationship started remains scarce. But going through her Facebook posts, the lovebirds had known each other for several years before their marriage.

Moreover, Hannah shared her wedding pictures in February 2017, almost two years after getting engaged in August 2015. So, could it be the duo got married that year?

Talking about Hannah Schmitz's husband, he has been working at Goldman Sachs since 2014. Other than that, the married duo must be enjoying their time together. The Schmitz couple has also welcomed two children in all these years of being together. When she helped Max win in Brazil in 2019, she had just returned from maternity leave.

Just like her marital life, not much has been revealed about Hannah Schmitz's children. Nonetheless, the Schmitz family must be doing well.

Another famous personality who has been married for a long time is Britt Reid.

The Red Bull principal strategy engineer was born Hannah McMillan in May 1986. Hannah Schmitz's father is Ian McMillan, while her mother's identity hasn't been disclosed yet. Likewise, she has a sister named Sian McMillan. Furthermore, as per her Facebook description, Schmitz moved to London in 2010. Before that, she lived in Caterham, England. 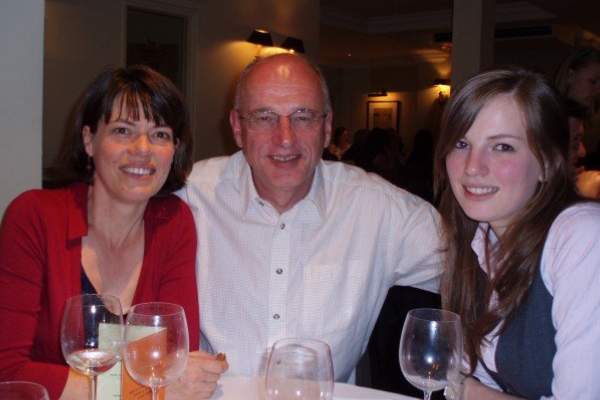 Hannah was interested in cars and how things worked, even as a toddler. While at school, that interest quickly turned into a passion for engineering. Talking about which, she completed A levels in Maths, Physics, Spanish, and Chemistry from Croydon High School in 2004. Then, as mentioned earlier, she completed her Master's degree in Mechanical Engineering in 2009 from the University of Cambridge.

Nonetheless, Hannah Schmitz's parents and sibling must be proud of her achievements. Though she is only in her 30s, she is already proving to be an important figure in Red Bull Racing. Likewise, she must be leading a healthy and blissful life with her husband and kids. We wish her abundant happiness and success in the coming days.