Where Is Patty Hearst Now? William Randolph Hearst's Granddaughter Was Kidnapped When She Was 19

Home Entertainment Where Is Patty Hearst Now? William Randolph Hearst's Granddaughter Was Kidnapped When She Was 19.

Patty Hearst came into the limelight in the 1970s. By her surname, "Hearst," one might already know she comes from a very well-known family, i.e., the Hearst family. Patty is a prominent New York politician and one of the nation's most well-known newspaper tycoons, William Randolph Hearst's granddaughter.

The Symbionese Liberation Army kidnapped Patty Hearst in 1974, shocking the whole US. Her capture and the time she spent being taken hostage have been the subject of various movies. Now that everything has happened and a while has passed, let's learn more about Patty and where she is.

Did Charles Sobhraj's Ex-Wife Chantal Compagnon Chose The Criminal Life For The Thrill ?

Was Raised In A Wealthy Family

Patricia Hearst was born Patricia Campbell Hearst on February 20, 1954, in San Francisco, California. Patty, who prefers the name Patricia, was born to her parents, Randolph Apperson Hearst and Catherine Wood Campbell. She is the third of their five children and grew up with her four sisters, Catherine M. Hill, Virginia Randt, Anne Randolph Hearst, and Victoria Hearst.

The businessman's daughter spent much of her childhood in Hillsborough. At first, she attended the Crystal Springs School for Girls and then the Santa Catalina School. Before transferring to the University of California, Berkeley, she studied at Menlo College in Atherton, California.

Similarly, Patty Hearst is the aunt of Amanda Hearst, an American socialite, fashion model, activist, and heiress to the Hearst corporation.

Kidnapped At The Age Of 19

Patricia Hearst's dad, who was among several heirs, was one of the lesser-known among his brothers and sisters. As a result, he and his wife had not thought it was necessary to take any precautions for his kids' safety, which later turned out to be a tragic mistake.

For her sophomore year, Patty enrolled at Berkeley, as her then-lover, Steven Weed, whom she met at one high school, had received a teaching grant and graduate fellowship there. Then-couple shared an apartment in Berkley and became engaged with plans to marry in the summer of 1974. But, little did they know, their lives were to turn upside down.

On February 4, 1974, at around 9 PM, Patty and her fiance heard a knock. As soon as she opened the door, many young women and men barged in with guns in their hands. They beat them and pushed Hearst into the trunk of their outside parked car, and drove off.

Patty Hearst's fiance informed the authorities, and it was later discovered that the then-19-year-old was by an extremist gang known as the Symbionese Liberation Army or SLA. Donald DeFreeze, a well-known criminal, was the leader of the group. The gang sought to overthrow what they referred to as the capitalist state of the US. 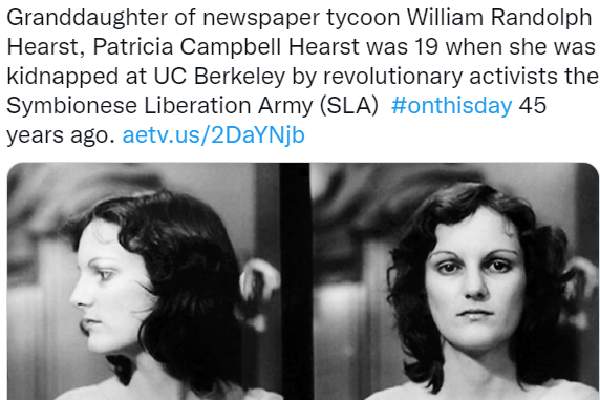 Patty Hearst, the granddaughter of publication tycoon William Hearst, was kidnapped at the age of 19. Image Source: Twitter Biography.com

Soon after the abduction, SLA made several audiotapes public and sought massive food donations in exchange for the teenager's release. The gang also began brainwashing and abusing her to make the young heiress a symbol of their agenda. This SLA strategy appeared to be successful. They later released a video where Hearst declared that she had joined the organization and its crusade to free the underprivileged. Twelve days later, Patty was seen on a bank surveillance video displaying an assault rifle during a bank robbery held by SLA.

In the meantime, the FBI undertook one of its most extensive searches with the use of agents to track down Hearst and cease the SLA. On May 16, 1974, two SLA members came dangerously close to being captured while attempting to steal an ammo belt from a nearby shop. Their running van led the police to SLA's safe house, and a colossal shootout took place, which left six SLA members dead, including their leader Donald DeFreeze.

However, William Randolph Heart's granddaughter was able to escape with the help of a few others, and she afterward traveled all across the nation. FBI eventually managed to locate her on September 18, 1975. Hearst was charged with bank robbery and other crimes. Later, the jury found her guilty despite claims of brainwashing and sentenced her to seven years in prison.

Later on, Jimmy Carter, the 39th US president, reduced Hearst's sentence after she had completed two years in prison. Additionally, with her help, the police tracked down a few members of SLA. As a result, President Bill Clinton pardoned her in January 2001, on his last day in office.

Where Is Patty Hearst Now?

Patty has seen a lot in her life, and following the release, she seems to be living a content life. Two years after her release, she tied the knot with her long-time partner, Bernard Shaw. The couple met at San Fransisco's Top of the Mark restaurant in 1976 after she was released on $1.5 million bail pending an appeal of her bank robbery conviction.

Patty Hearst's husband was one of her bodyguards. The duo got engaged in February 1978 and exchanged their vows in 1979. The lovebirds welcomed two daughters, Gillian Hearst Simonds and Lydia Hearst-Shaw. Furthermore, Bernard Shaw's wife, Patty Hearst-Shaw, is also a doting stepmother to his two children, Thomas Shaw, and Heather Shaw.

Unfortunately, Patty Hearst's husband passed away on December 17, 2013, following a long illness. She currently resides in New York and Connecticut with her children.

William Randolph Hearst's granddaughter has lived an ordinary life since she was released from jail. In addition, Hearst has been involved in charities and fundraising. All in all, Patty must be currently leading a happy life. Nevertheless, Patty Hearst has our best wishes for success in all her endeavors.