You might recognize Amanda Randolph Hearst as an American socialite, fashion model, activist, and heiress to the Hearst Corporation, a multinational mass media, and business information conglomerate. But she has much more to offer than that, and she has a personality that inspires many people.

Amanda Hearst has a very established and notable professional career, and her personal life looks equally satisfying. Since there is much to unveil about the socialite, we will learn several interesting facts about Amanda through this article.

Amanda's Parents Divorced Before Her Birth

The activist was born on January 5, 1984, in New York City, U.S. Her mother, Anne Hearst, is Patty Hearst's sister and a great-granddaughter of the founder of Hearst Communications, Inc., William Randolph Hearst. Furthermore, Anne is an American socialite, publishing heiress, and philanthropist.

Likewise, Amanda Hearst's father is Richard McChesney, and he separated from Anne before Hearst's birth. While not much is known about her dad, Amanda's mom went on to marry twice after the divorce. She married King Harris after her divorce and welcomed a son/ Amanda's half-brother, King Randolph Harris. Afterwards, Anne also separated from her second husband and married novelist Jay Mclnerney on 21 November 2006.

Moreover, Amanda grew up in an influential family but she never took her privileges for granted.

Growing up, Amanda never neglected her studies. The American socialite attended the Chapin School in New York City and later graduated in 2002 from Choate Rosemary Hall, a boarding school in Wallingford, Connecticut.

Furthermore, Amanda enrolled at Boston College but dropped out to pursue modeling. Later, the activist attended Fordham University and earned her bachelor's degree in Art History, Criticism, and Conservation in 2007.

Miss Hearst started working at Marie Claire as an Associate Market Editor, a French-British international monthly magazine, from 2010 to 2014. Later, from 2014 to 2017, she started working at Hearst Magazines, one of the world's largest magazine media publishers across all platforms, as a Special Projects Editor for T&C Magazine.

Furthermore, the gorgeous lady has been serving as the Contributing Editor at Hearst from 2017 until now. Overall, Anne Hearst's daughter's professional career looks striking, and we hope she will succeed more in the coming days.

Is The Co-Founder of Maison De Mode And Well Beings

Many people might not know that the heiress of Hearst Corporation is the co-founder of Maison De Mode, a premium ethical fashion company. Maison De Mode exists to promote sustainability and empower individuals, intending to become the global platform for sustainable fashion, linking producers and customers for a better tomorrow. Moreover, the company was founded by Amanda alongside Hassan Pierre and Carmen Busquets in 2015.

Not just that, the businesswoman is also the co-founder of Well Beings, a nonprofit organization. It is an organization founded by Amanda and Breanna Schultz dedicated to animals, people, and the planet.

The business partners' shared love for animal welfare drew them together, resulting in more than five years of partnership within NYC Animal Welfare groups. They were most recently committee members/founders of Friends of Finn, a Humane Society of the US dedicated to stopping the horrific treatment of dogs in puppy mills.

She Is A Former IMG Model

Apart from working as a contributing editor and associate market editor, Amanda has also tried her luck in the modeling industry. As a model for IMG models, an international modeling agency headquartered in New York City, Hearst has appeared on the covers of International Harper's Bazaar, Town & Country, Cosmopolitan, and other major magazines.

In addition, she has also been featured in Vanity Fair and writes a monthly column for Hamptons and Gotham magazines.

Is Happily Married To A Film Director

Alongside sharing a prosperous professional career, Ms. Hearst also has a stable, content, and fulfilling personal life. The socialite who was voted 7th hottest billionaire heiress by Forbes Magazine is truly gorgeous, a fashion sensation, and the epitome of elegance. As such, many people were interested to know who she would end up getting married to, as Amanda has always been beautiful inside and outside.

Well, to break the ice, the activist is happily married to her husband, Joachim Ronning. While the duo engaged in 2018, they exchanged the wedding vows on August 2, 2019, in San Simeon, California, at Hearst Castle. They have been leading a beautiful life since then.

Furthermore, Amanda Hearst Ronning's husband is a film director and writer from Sandefjord, Norway. He has around 12 directorial credits under his name, and some of his projects include Kon-Tiki, Marco Polo, Maleficent: Mistress of Evil, and Bandidas, to name a few. 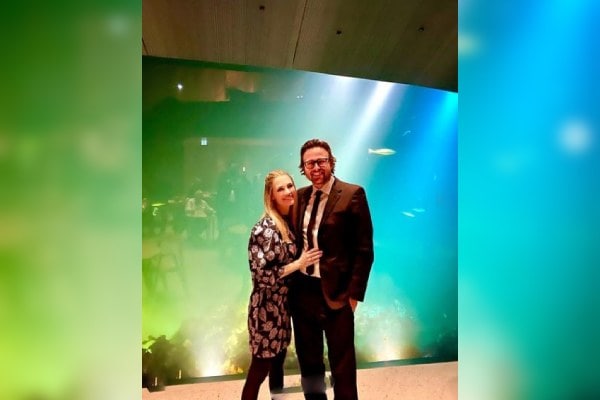 Apart from being a successful director, Joachim is also a loving husband who has always been there for his wife. Nonetheless, the duo shares a happy marriage, and we hope their love will be able to stand the test of time.

Devoted Mother Of One

Besides being a loving wife, Hearst is a kind and giving mother who makes no compromises while raising her kid. Alongside her husband, Joachim, the couple is the parent of one child, Hawk (full name Haakon Hearst Ronning). On June 2022, Amanda shared the picture of her son on her social media handle and mentioned that he is half-Norwegian and half-American.

As the activist's son is still very young, Amanda must be busy taking care of the little one. Nevertheless, it will be a pleasure watching Hawk grow into a fine gentleman.

Overall, Amanda Hearst is thriving in her personal and professional life, and we hope she succeeds in everything she does. Amanda is undoubtedly an inspirational figure, and our good wishes go along her way.