Home Entertainment What Are All Of Roberto Durán's Children Doing Now?.

Roberto Durán is a retired boxing icon who is also a proud dad of his seven children. Image Source: Roberto Durán Instagram.

Roberto Durán is a former boxer from Panama who battled from 1968 to 2001. He formerly claimed world titles in lightweight, welterweight, light middleweight, and middleweight.

Durán is the undisputed and unchallenged lightweight champion and the lineal welterweight champion. Besides, the talented fighter is also a devoted father. He and his wife, Mia Felicidad Durán, has been blessed with six kids. Let's find out more about Roberto Durán's children with his spouse of more than 50 years in the article we're reading today. 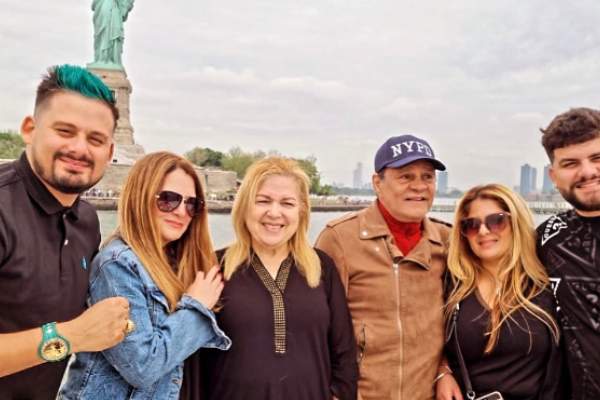 Like Roberto Durán, another former professional boxer who became well-known for his incredible fighting skills is Dicky Eklund.

Irichelle Durán Has Followed In Her Father's Footsteps

Irichelle Durán, a professional boxer from Panama born on November 18, 1976, has followed in her father, Roberto Durán's footsteps, who is a four-division boxing world champion. She had a fortunate upbringing.

The fighter's daughter first revealed her intentions to become a professional boxer in 1999. However, her dad wasn't very supportive of her career choice. Roberto publicly stated that he did not want his daughter to pursue boxing. But if she followed her passion, the boxing icon would attend all of his daughter's bouts.

Irichelle claims she trained for this battle for seven months in an Australian training facility. She is also active as a boxing writer and essayist. Durán enjoys writing stories and collaborates with Rodney Darkchild Jerkins on a project. In addition, the fighter uses her Instagram account, @irichelleduran, to update her followers on her lifestyle.

Victor Durán Is Involved In Music

Many people may be curious whether Roberto Durán's kids have walked in his footsteps as a sports figure. Nevertheless, Victor appears to pursue a different line of work.

Victor Durán, who also goes by the name Victor Durán Brambri is currently working as a music producer. He founded Durán Music Studio, a recording studio where people can obtain high-quality sound at affordable prices. The young musician is also highly active on social media, where he goes by the handle name @duranmusicstudio on Instagram.

Jovanna Is A Loving Wife

Jovanna Durán is happily married to her husband, Marlon. The pair tied the knot on August 8, 2018, and they have been blissfully together ever since. As they constantly share each other's photos on social media, they appear to be very into each other. In addition, the pair are the extraordinary parents of a daughter named Irichelle Durán and a son named Miguel Orts Durán. They are both enjoying their early 20s right now.

However, little information about Jovanna's partner or her children is available. But based on the description on her Instagram handle, she is a joyful mother and wife. We can only hope that Roberto Durán's daughter will open up more about her personal life in the coming days.

Robert Durán Jr. Claims To Have No Relation With His Dad

Robert Durán Jr. is a professional boxer like his dad, who competes in the Welter division. You might mistakenly believe that the iconic boxer's child is a young rich man, given he has a famous dad and a limited number of fights. However, the 31-year-old has had to forge his way because he never got along with his father. Junior feels bitterness because he didn't spend much time with his father when he was a child.

In an interview, Robert claimed that his mother and grandmother used to show him videos of his father's battles. The young Durán was proud of his dad when he was younger and was pleased to see his dad. But, growing up, he understood that his father wasn't around for him. Therefore, the legendary boxer's child no longer feels the way a son should feel for his dad.

Moreover, Durán Jr. was born not long before his dad's victory over Iran Barkley in 1989 in his 92nd bout. Fast forward to thirty years from then, the Welter division fighter claims he has no relation with his dad. However, we hope one day, the legendary Roberto Durán cheers on his son from the stands, and their relationship improves.

Another child of Roberto Durán is Roberto Armando Durán Iglesias, who has generally maintained a low profile, unlike him and his other siblings. However, the celebrity's son is active on social media, especially Instagram, where he uses the handle @duranfulo.He has been followed by over 3900 people on the platform.

Durán Iglesias indicated that he is an enthusiastic football supporter in his IG bio. The young man's bio, which reads viscaelbarca, suggests that he might be a Barcelona fan. In addition, he appears in a lot of his siblings' social media posts.

Robin Durán Is An Entreprenure

Robin Durán, born Robin Durán Iglesias, has created the Instagram account @robinduran20, where he describes himself as an entrepreneur. According to his Facebook, he is both an actor and a producer.  In a similar vein, his LinkedIn profile revealed that Roberto Durán's son is also a producer for Jaguar movies.

Besides, Robin is also a proud dad of three children and a loving husband to his wife. Besides, we discovered that his father gave him the name Robin in honor of the English folk figure Robin Hood.

Roberto Durán was a fighter who donated a sizable amount of his profits to the Panamanian community as soon as he achieved fame. He was also rumored to give away cash on the streets. The legendary fighter said he wished he could be more like Robin Hood. Consequently, he gave his son the name Robin.

Dalia Durán Is A Boxing Photographer

Dalia has been active in boxing for many years in a variety of roles. She is a UCLA graduate and is regarded as one of the top boxing photographers in the industry who currently works for ESPN. The experienced photographer has been a regular at ringside for most of south Florida's major combat events for more than two decades.

Durán has played a crucial role in the promotion of female fighters as the director of public relations for the world women's boxing hall of fame. She spent numerous years working in collaboration with fellow Florida Boxing Hall of Fame inductee Luis de Cubas to promote combat events in south Florida.

Furthermore, the outstanding photographer was recognized on induction weekend after her dad, Roberto, was inducted in 2012. This induction is significant in boxing history since it is the first time a father and daughter have been honored in a hall of fame.

Overall, it appears that Roberto Durán's children are doing well. We expect them to feel comfortable disclosing additional personal information in the coming days. We hope they will continue to excel in their respective fields and honor their parents.