Did Charles Sobhraj's Ex-Wife Chantal Compagnon Chose The Criminal Life For The Thrill ?

When talking about the notorious serial killer Charles Sobhraj, many questions arise. Such as the motive behind his wrongdoings and his past. What sort of childhood he had for him to turn this way? Apart from this, many people are also curious about his first wife, Chantal Compagnon, and about what happened to her.

This article will discuss everything about Charles Sobhraj's ex-wife Chantal Compagnon and their relationship.

How Their Relationship Started?

Charles Sobhraj was born to an Indian father and a French-Vietnamese mother. But since his father denied paternity, Charles' mother married a French lieutenant who adopted Charles. He had a troubled childhood and had attempted twice to escape to Vietnam.

The Serpent reportedly studied law and Psychology in Sorbonne. When Charles met Chantal Compagnon in the late 1960s, he was with another woman named Chantal Desnoyers, with whom he had two kids, Pranck and Muriel Anouk.

Just like many others, Compagnon wasn't immune to his charms and fell for him. The couple dated briefly before Charles proposed, and at that time, he promised to go straight. Unfortunately, Sobhraj got arrested on the same day for attempting to deceive police while driving a stolen vehicle. He was imprisoned for eight months.

Despite his criminal activities and such instances, Chantal never left his side. She was head over heels in love with him and wanted to be with him regardless. Despite her family's disapproval, the couple got married upon Charles's release. Also, Chantal was reportedly pregnant at that time.

From the very beginning, Charles Sobhraj's ex-wife, Chantal, showed her unwavering love and loyalty towards him. The then-newlyweds left France for Asia and traveled through Eastern Europe on fake documents. The former duo finally settled in Mumbai, where Chantal gave birth to their baby daughter. Often, when the responsibility of a child arises, people tend to change their way of living and opt for some steady and better way of living, but this duo had no intention of changing. Instead, they continued to rob tourists along the Hippie Trail.

Another couple who were partners in crime is Raymond Fernandez and Martha Beck. They lured people with lonely hearts and killed them.

Chantal and her daughter Usha lived on the run with Charles. There was no place they could call home. Then in Kabul, Afghanistan, in 1973, the couple was jailed for not paying hotel bills. That's when Usha got sent to France to live with Chantal's parents.

After years of being Sobhraj's accomplice, Chantal finally mustered up the courage to leave and change her and her daughter's life for the better. They got divorced in 1969. After the divorce, Chantal remarried Leon Harris and settled in the US.

Despite being divorced, Chantal never stopped caring about Charles and kept in touch with him. Even when she was married to Harris, she maintained contact with him, leading to a failed marriage. Furthermore, even Chantal Compagnon's daughter cut ties with her.

When Sobhraj got arrested in Nepal, Compagnon filed a case against the French government for refusing to provide him with any assistance. Surprisingly, the Serpent married a Nepali woman, Nihita Biswas, in 2008, whom he met as his interpreter. Until 2011, Chantal continued her relationship with Charles, so she got confronted by angry Nihita over the phone to not stay in touch with him.

Charles Sobhraj's former spouse, Chantal, was young, naive, and in love. She blindly followed Charles and stayed with him through life's thick and thin, through good times, and especially during the bad. In 1973, Indian police arrested Sobhraj for his unsuccessful armed robbery of jewelers at Hotel Ashoka. Chantel was his accomplice in all his crimes and also helped multiple times to help him escape.

Charles was arrested in Nepal in 2003 and was serving time for the murder of American backpacker Connie Jo Bronzich in 1975. Before this, Sobhraj had already served two decades in jail for poisoning French tourists in India. On 21 December 2022, the supreme court of Nepal ordered his release on the grounds of his old age and good behavior.

After serving 19 years in prison, Sobhraj was finally released on 23 December 2022 and was deported to France. Upon his release, when asked about his thoughts, Charles expressed his desire for retaliation against many people, including the state of Nepal. 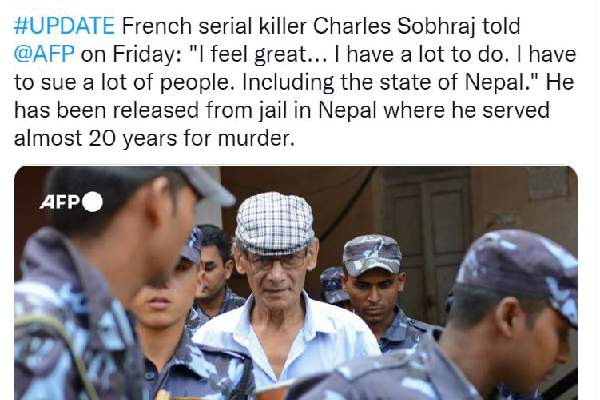 Being linked with Sobhraj since a young age, Chantal has had a long history with the alleged serial killer. After being separated from her second husband, there has been no information regarding Compagnon's whereabouts as of now. But since the release of Charles and he went back to France, will the ex-partner reunite again?