Oliver Askew is one of the racers of the 2021-22 season of Formula E. Image Source: Oliver Askew Instagram.

Racing is a demanding sport, and at the same time, it is one of the dangerous sports too. Among several racing series, Formula E is also very popular. The 2022 Formula E Series has seen highs and lows for several racers, and fans are curious to know who will be the champion this season.

Oliver Askew is one of the drivers competing in the 2022 Formula E World Championship. He currently competes for the Avalanche Andretti Formula E Team and has gained significant fame and fortune to his name. Now, let's take a look at Oliver's biography, consisting of facts about his personal and professional life.

One Of The Two Children Of His Parents

The racing driver was born Oliver Clark Askew on December 12, 1996. He was welcomed by Tony Askew and Penny Askew in Melbourne, Florida, USA. Furthermore, he grew up in Tequesta, Jupiter, Florida, with his sibling, Hanna Askew. Also, Oliver Askew's sister graduated from Jupiter High School in the spring of 2018. The Askew siblings might have had a wonderful time growing up together.

Oliver Askew's father is a retired air traffic controller. The former was introduced to racing at seven after his dad gifted him an afternoon of go-karting at the Palm Beach International Raceway. Although the Askew family is not involved in racing, Tony thought it would be a fun father-son bonding activity.

The activity became a ritual, and the father-son duo eventually bought their go-kart. Oliver, who had already caught the racing bug, raced regionally for a few years and then moved up to other championships. 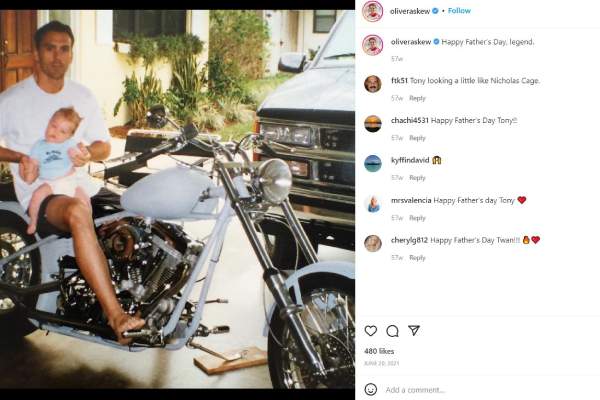 While his dad is American, Oliver Askew's mother, Penny Pernilla, is from Sweden. As a result, he is of Swedish and American nationality. Likewise, he is bilingual in Swedish. Furthermore, the racer's mom also supports him and must be proud of him.

Talking about his education, Askew attended Jupiter High School, before being home-schooled. Unfortunately, not much information regarding which university he attended has been revealed. So, could it be Oliver focused on his racing career after high school?

Oliver Askew Net Worth And Career

Oliver, who started karting at the tender age of eight, got selected as a Team USA Scholarship recipient in 2016. As a result, he competed in the Walter Hayes Trophy and Formula Ford Festival. Moreover, he continued moving up the rank and currently competes in Formula E. So, he must have amassed quite a lot of fortune. Thus, Oliver Askew's net worth must be a commendable sum.

In 2016, the 6' 3" tall racer won the Mazda Road to Indy Shootout and received the $200K scholarship that allowed him to participate in the 2017 Cooper Tires USF2000 Championship Powered by Mazda. He became the champion and earned a $400K scholarship from Mazda, allowing him an entry to the Pro Mazda Series in 2018. As a result, he signed with Cape Motorsports in February 2018, and in September of the same year, he claimed his first win in Pro Mazda.

In February 2019, the driver signed with Andretti Autosport to race in the 2019 Indy Lights Season, which he eventually won. Then, in July 2019, he joined the Portland test with Chip Ganassi Racing. He and Patricio O'Ward were announced to race full-time for Arrow McLaren in 2020. Later, in January 2021, he debuted in sports car racing, where he drove for Riley Motorsports in the LMP3 class at the 24 Hours of Daytona.

Furthermore, in November 2021, Oliver made his Formula E debut and partnered with Jake Dennis. He is now competing for the Avalanche Andretti Formula E team. WIth all that being said about his professional career, take a look at some of Oliver Askew's stats.

Talking about Oliver's salary, he must have received a considerable sum. On average, a Formula E driver earns $61,198 annually. Also, as the winner of the 2019 Indy Lights, Askew received a $1.1 million scholarship. Besides, he must have signed sponsorship and endorsement deals with various brands. As a result, the racing driver must be earning notably.

Hence, Oliver Askew's net worth must be a commendable sum.

Is Oliver Seeing Someone?

Oliver came into the limelight as a result of his exemplary racing records. The promising racer has however kept most of his personal life away from the media. Moreover, his social media posts are mainly about his professional ventures.

As a result, information about Oliver Askew's girlfriend remains a mystery. Furthermore, it's not disclosed whether he has one and if he is trying to protect the privacy of his partner. All in all, let's hope there comes a day when the driver will post or reveal about his other half.

Nonetheless, Oliver's parents must be proud of his racing career. He is lucky to have such a supportive dad and mom, who did everything they could to fulfill his dream. Let's hope he continues making them proud and climbs higher on the ladder of success. Finally, we wish Oliver a life full of happiness and prosperity.