Alice Powell started racing go-karts when she was just eight years old after her grandfather introduced her to motorsports. Image Source: Alice's Facebook.

British racing driver Alice Powell has been a strong contender in races for many years. The racer shot to fame when she won the BWRDC GoldStars award in 2010 at just 16 years old. Her racing career took her to new heights from there on, and she has had podium finishes in numerous championships.

Along with racing, Alice has also had an astounding career playing hockey during her school days. Although she focused more on racing than she did on hockey, it is safe to say that she is exceptionally good at it. So let us have a look at the life of racer Alice Powell.

Born and raised in Oxford, Alice Powell comes from a humble family. She was born on 26 January 1993 to parents Eileen Powell and Tony Powell. The racer has been very private regarding her family's information. However, her parents are said to be very proud and supportive of their daughter.

Moreover, looking at her Instagram posts, Powell seems to be one of three children of her parents. Unfortunately, details about her siblings, including their names, are not known to the public. However, they seem to be incredibly supportive of Alice and come to cheer her on during races.

Alice Powell attended the reputed Cotswold School located in Gloucestershire, England. The school has been reviewed as an "outstanding" school, so the racing driver must have received an excellent education. It provides GCSE and BTEC courses to its students. 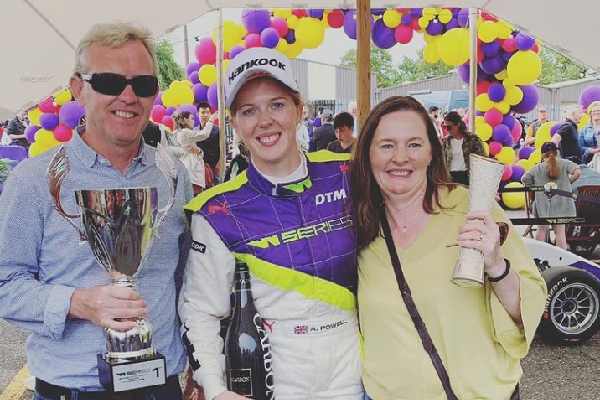 While attending school, Alice Powell was a strong hockey player. She played for the Reading Hockey Club. Her team even won a local championship in 2016. Additionally, Powell also played soccer when she was younger. She was a team member of Chadlington Football Club.

In the harsh world of racing, Alice Powell has survived with her hard work and determination. Being a woman in a male-dominated career must not have been easy for her. Yet, despite the challenges, the racing driver has persisted since she was young. Moreover, she has been able to become one of the most famous racers to date.

Alice Powell's Career As A Racer

The passion for racing indeed does start young. Alice Powell was introduced to the world of motorsport and racing by her grandfather, Jim Fraser, when she was just six years old. The young racer learned to drive a car when she was just six, and by the time she was eight, she was already competing in go-kart racing.

When she was 16, Alice Powell became the youngest female racing driver who participated in the Formula Renault race. As a result, she was decorated with Young Star Award and British Women Racing Drivers Club GoldStars' Elite' Award in 2009. The teenaged racing driver competed in many Formula Renault races and even won an international championship. 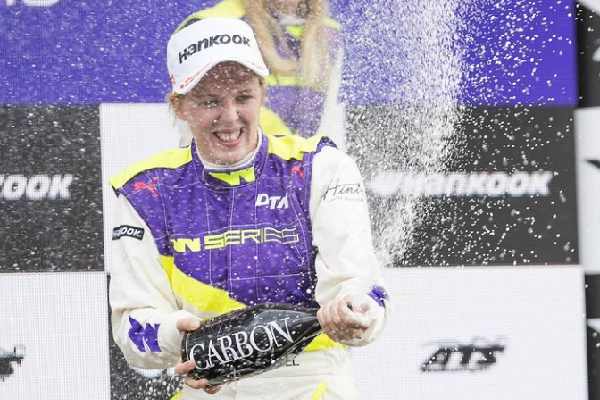 Alice Powell has won a number of championships in the span of her career. Image Source: Alice's Facebook.

Slowly but surely, the racer began climbing the ranking. Finally, in 2012, she was selected as a team member for the Status Grand Prix team. As a result, the racer became the first woman ever to score points in the GP3 series since its inception.

The British racing driver then participated in the Formula 3 series. She placed second in the MotorSport Vision Formula Three Cup in 2013, only behind Alex Craven.

In 2014, racecar driver Alice Powell was still hustling to become a Formula One driver. However, despite her intense training and immense hard work, she had to abandon her dreams. Later, she revealed that due to the lack of funding and the difficulty of receiving the super license, the plans had to be abandoned.

In 2019, Alice Powell competed in the W Series championship. In addition, she has also participated in the MRF Challenge and Formula E.

Despite not racing in F1, Alice Powell has participated and won in multiple racing events. Here are a few races in which Alice participated listed below.

After a long racing career, it seems that Alice Powell has taken an interest in coaching new racers. Her apprentice Abbi Pulling is already on her way to take the motorsport world by storm. The duo is doing great as Abbi has had numerous podium finishes under Alice's mentorship.

Moreover, Alice Powell is also trying her hand at commentary. She joined the Sky Sports Formula 2 Commentary team in 2020. The racer was a commentator in the July 2020 season.

Alice Powell Net Worth And Earnings

The Oxford-native has been involved in the world of racing for many years. However, she has always preferred to keep quiet about her lifestyle. But, looking at her career, one can expect Alice Powell's net worth to be of a commendable sum.

Plus, being an avid racer might earn her a good paycheck. She has also won or had podium finishes in multiple racing events. The prize money from these wins must have made her quite the sum of money.

Moreover, Alice Powell also earns from her numerous sponsorships and brand endorsements. The racer is the ambassador of Dare to be Different and has had a brand deal with sportswear company Puma. Earnings from these partnerships have undoubtedly helped increase Powell's fortune.

After years of dating, British racer Alice Powell's boyfriend proposed to her back in 2018. Her now-fiancé, James Rodley, asked her to marry her with a beautiful ring that she flaunted on her Instagram. However, the engaged couple has not made any wedding announcements yet. 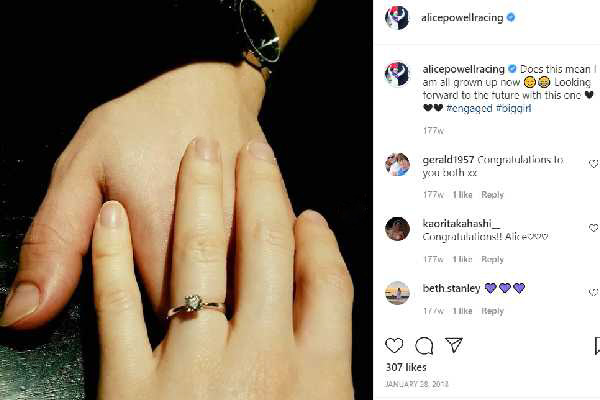 But, seeing their love for one another, it is inevitable that they will spend a happy life together.

With her focus on mentoring and coaching the new generation of racers, Alice Powell moves ahead in her life. The Formula Renault championship winner has an incredibly supportive husband-to-be and a family by her side. We wish her the best in all of her future endeavors.