Russian racing driver Irina Sidorkova has been shot into the limelight after being selected as one of the competitors in the W Series. She became the youngest racer to participate in the series as she was selected at just 17 years old. Since the age of six, the young lady has been racing and wishes to participate in Formula One someday.

Even in her teenage years, the Russian national was able to achieve a lot of success. She is one of the most famous racing drivers to come out of Russia, even at such a young age. She has been working hard to climb the ladder towards Formula 1.

Let us learn more about the racer Irina Antonovna Sidorkova.

Born on the 27th of June, 2003, Ири́на Анто́новна Сидорко́ва, was raised in a happy family. Raised in Petrozavodsk, Russia, Ira Sidorkova was never "girly" despite her parents' wishes. The racer's father, Anton Sidorkova, was not very amused with his daughter's interest in cars. At the same time, her mother, Anna Sidorkova, wished that her child would pick an interest in something feminine.

Ever since she was a child, Irina has been bending the gender roles put in place by society. Even though her florist mother and entrepreneur father wished for her to be more feminine, Ira turned more tomboyish. The racer was interested in cars even though her mother engaged her in ballet. 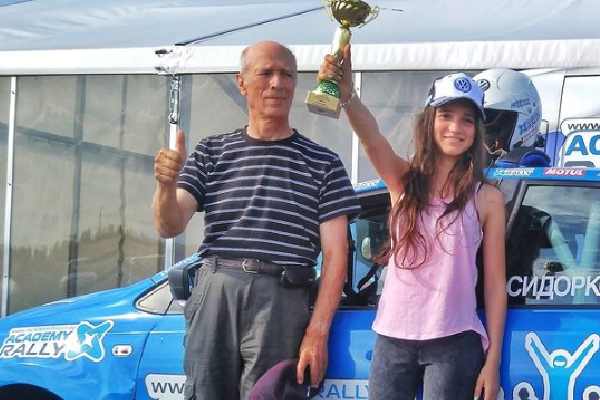 Racing Driver Irina Sidorkova has been fighting with the stigma against women in the motorsport industry. Photo Source: Irina's Instagram.

However, things seem to have changed after she grew up. First, the motorist started to gain immense fame from her racing career. Then, slowly but surely, Irina Sidorkova's parents accepted her dreams and started to support her.

One of Irina's biggest supporters is her grandfather. Her grandpa attends many of her races to see his granddaughter shine on the racetracks. Despite her constant travels, the racer always remembers him and his love for her.

Starting Of Her Career

The root for one's interest is planted at a very young age. Similar was the case for Irina Sidorkova. Three-year-old Sidorkova became interested in cars after watching the Pixar movie Cars in 2006. Only at the age of six, the racing driver was allowed to go-karting with her father. After trying it out once, young Irina was hooked and was hell-bent on becoming a professional racer one day.

Maybe that was the moment when Irina Sidorkova's parents realized that she was pretty serious about her dreams. They came around from their desperation to make her feminine. Finally, her mother and father pushed Ira towards her dream of becoming one of the greatest racers.

As Ira Sidorkova was still pretty young when she started racing, she began with karting. After that, she would go on to compete in Northern Russia and Estonia. She won the 2012 championship in Estonia and was a part of WSK Masters, WSK Euro Series, and ROK Series.

Moreover, the young racer was a recurring participant in the Finnish Championship. Despite being so young, Irina managed to win many races and won numerous karting championships. Even if the races had over fifty participants, she would try her best to finish in the top 10. Because of her own determination, her parents started to work hard to help her achieve her dream.

Taking part in racing tournaments requires money, and after participating in many championships racing driver Irina Sidorkova's parents, could not afford to do it themselves after some time. So, to help further her dream, they began to look for sponsors. Luckily, due to her exceptional performance, the racing driver was sponsored by Michael Lepekhov. Her sponsor allowed her to race using a touring car even if she was just twelve at the time.

Soon after making the transition to rally cars and then touring cars, Volkswagen selected her to be one of the Russian Circuit Racing Series - National Junior participants. As a result, Irina Sidorkova was able to finish second in the very first season itself. The motorist had three wins, two fastest laps, and six podium finishes in the 2017 season.

Irina was determined to perform better in the 2018 season, so she trained hard. Unsurprisingly, Ira won the championship at just 15 years of age. She had three wins, five fastest laps, and six podium finishes in that season. 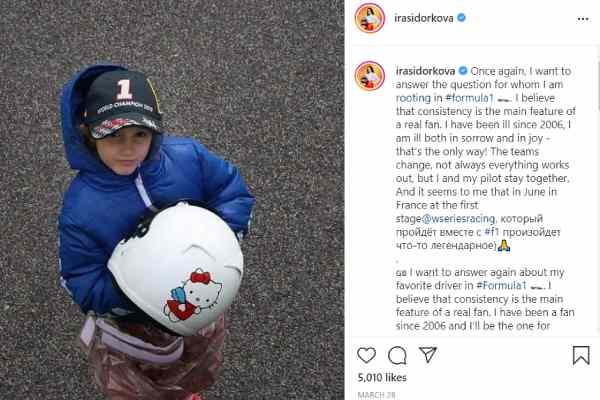 Irina Sidorkova fell in love with motorsport at the age of 3 and began her racing career when she was 6. Image Source: Irina's Instagram.

Due to her immaculate performance in the national championships, the racer was invited to participate in the Formula 4 Northern European Zone Championship by SMP Racing. Unfortunately, the road started to get tough for Irina henceforth. However, despite the difficulties, the young woman would give her best and move forward.

The young racer continued to race in the junior category and participate in the Russian and Spanish F4. Ira participated as a part of the SMP Racing Junior Team. Well, the racing driver managed to finish 6th in the Russian championship.

Due to the exclusion of women in the motorsport community, W Series was established to fight the stigma and give a platform for women to participate in races freely. Established in 2019, although it is relatively new in the racing world, W Series has managed to bring impressive changes towards women in racing.

Irina Sidorkova was selected as a newcomer for the 2020 season. She became the youngest participant of the series at just 16 years old. Unfortunately, due to the pandemic, the season was postponed to 2021. However, the motorsport enthusiast has managed to perform exceptionally well in the series.

There are high hopes that Ira will manage to complete the series with high ranks against her competitors Alice Powell, Marta Garcia, and Abbie Eaton, among others.

Here is a shortlist of the performance of Irina Sidorkova in many races.

Even though she has achieved so much success at a young age, there is a long way to go for Irina Sidorkova. Nevertheless, we hope that someday she can participate in the Formula 1 championships and become a household name.

Irina Sidorkova Net Worth And Earnings

As one of the successful and young female racers in the current scene, Irina Sidorkova's net worth must be substantial. Unfortunately, despite her immense popularity and numerous wins, no credible sources have properly estimated her value. However, she still manages to live a comfortable life and can participate in multiple championships.

Despite the mystery, the racer has been able to partner up with many companies to participate in races. Brands like Evalar Sport, NGK NTK Eurasia have been supporters of the young racing driver. 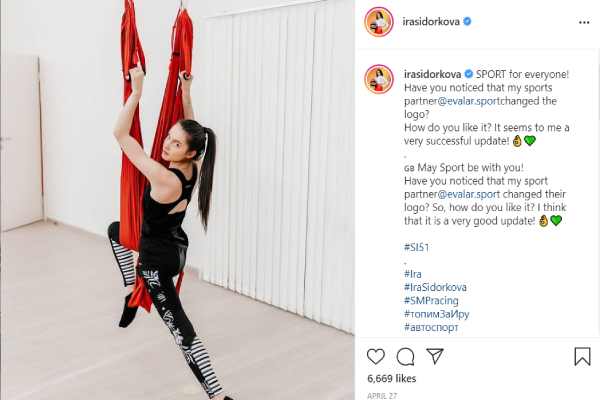 In addition to sponsorships, the racer also gains a lot of money by her numerous wins in the racing championships. There have been reports that the winners of Russian circuit racing can thousands of dollars. And, it is known information that the winner of the W-series pockets $500,000, and $1 million is distributed amongst the other participants.

Moreover, the young athlete has also dropped a merch line. The store sells hoodies and t-shirts that come in a black and white variety. Irina Sidorkova's net worth might have benefitted from the merch sales as well as sponsors.

Young and beautiful Irina Sidorkova has been the talk of the town ever since she was young. So, naturally, her fans have always been keen on finding out who her partner is. Unfortunately for the fans, the Russian national has preferred to stay private about her love life.

However, it has been long speculated that Sidorkova is single. But, she is still young and is only interested in furthering her career as a racer. The racing driver is hyper-focused on doing her best and probably has no time for romance. And we might have to wait for a while to meet Irina Sidorkova's partner.

Despite her being single, Irina is sure to find a suitable partner someday. We hope that whoever they might be, they'll be able to keep the racer happy.