Maximilian Götz is a professional race car driver who is making his third appearance in the DTM Championship. Photo Source: Maximilian Götz's Instagram.

Maximilian Götz is not a new name in the motorsports world. He has shown his versatility by competing in the Formula, Endurance, and GT racing series over the years. Moreover, the racer has clinched many championship titles in his career. For example, he is the winner of the 2014 Blancpain GT Series Sprint Cup Pro.

The sportsman has participated in three seasons of Deutsche Tourenwagen Masters. He is currently participating in the series' 2021 season. Furthermore, the race car driver won one of the rounds of the championship.

Thus, he is undoubtedly one of the formidable opponents in the current season.

So, let's unravel Maximilian Götz's racing beginning and progress in this biography.

The athlete was born on February 4, 1986, in Ochsenfurt, West Germany. He was inspired to learn racing after watching his dad's races. However, Maximilian Götz's father, Addy Götz, was initially hesitant about his son pursuing a career in motorsports due to his own experience. But after realizing the former's passion, he began to organize sponsorships for him.

Likewise, Götz's mother has always been there for him from the beginning. His two brothers also encouraged and supported him in his career.

The German racer began his journey as a kart rider. He competed in several junior sections before advancing to championship matches. Eventually, he got an opportunity to compete in Formula races.

There is very little information regarding Maximilian's educational background. Nonetheless, he must have graduated from high school in his hometown.

Maximilian Götz Net Worth And Career

The German driver has been racing for nearly two decades. However, Maximilian is constantly training to perform better in every new race. As a result, he has won many championships and received a large sum of prize money over the years.

Alongside titles, the driver enjoys multiple endorsement deals. Each one must be worth millions of dollars considering his popularity. Hence, Maximilian Götz's net worth must also be substantial.

Aforementioned, Maximilian Götz kicked off his career by competing in local kart races. His most notable result in the junior section was securing fourth place at the 2000 South Garda Winter Cup. In addition, the athlete secured the fifth position in the 2001 South Garda Winter Cup Formula A.

The sportsman began competing in ADAC GT Masters in 2010. He became champion in his third season at the 2012 ADAC GT Masters. Afterward, the formula racer switched to Endurance racing in 2013. He has also participated in Nurburgring Langstrecken Serie for several seasons.

Some of Maximilian's rankings in his participated races are listed below:

The German race car driver participated in the SP9 Pro class of the 2021 ADAC Total 24 hours of Nurburgring. He finished in the third position alongside his Mercedes-AMG teammates Raffaele Marciello, Daniel Juncadella, and Fabian Schiller.

Götz's first entry in DTM was in 2015 with DTM Team Mucke. Unfortunately, he ended the championship in 22nd position after participating in eighteen races.

Moreover, the racer's second DTM appearance was in the following season in 2016. He joined his current team Mercedes-AMG and finished in the twentieth rank.

The athlete has finally made his return to the DTM after five years in 2021. This season he is joining Esteban Muth, Christian Klien, Esmee Hawkey, and other renowned drivers.

Maximilian has already attracted attention after winning the second round at Lausitzring Circuit on July 25, 2021. He also finished third after the winner Lucas Auer and runner-up Liam Lawson in the Hockenheimring circuit on October 3, 2021.

Hence, Maximilian Götz's net worth must have increased over the years alongside his progressing motorsports career.

Maximilian initially had a difficult time racing due to the lack of sponsors. But, now he is an emerging star in the DTM races with high chances of winning. As a result, numerous companies and brands are lining up to endorse him.

Does Maximilian Götz Have A Girlfriend?

The German race car driver has been very open about his family background and childhood in the media. But, when it comes to relationships, he has been quite subtle and hasn't mentioned his partner yet.

Nonetheless, the racer shared a picture with an unnamed lady companion in July 2021. He also called her a special person in his post. So, the beautiful woman is likely Maximilian Götz's girlfriend. 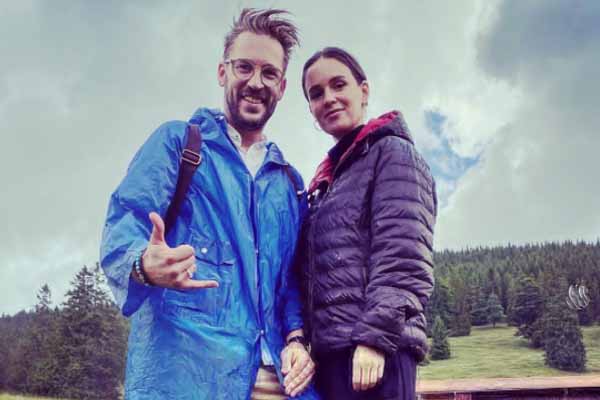 But, both parties haven't confirmed the dating news as of October 2021. So, we still have to verify whether they are dating or not.

Maximilian Götz is one of the strong contenders to look forward to in the 2021 Deutsche TourenWagen Masters. He is training hard to win his first DTM title.

Hopefully, we will see him winning this year's DTM championship and many other racing series in the upcoming days.