Alexander Zverev is a famous tennis player in the sports industry. He has been making headlines since his professional debut in 2013. Moreover, the player specializes in two-handed back-hand and right-handed playing. He has won many matches over the years with his excellent skills.

The sportsperson became the youngest champion to win the ATP Finals. He reached his career-high rankings in the third position at the age of twenty. Furthermore, the athlete has bagged sixteen titles as of August 2021. In addition, he recently earned a gold medal at the 2020 Tokyo Olympics.

So, let's get to know more about Alexander Zverev in this biography.

Likewise, Alexander Zverev's mother, Irina Zverev, is a legendary tennis figure herself who was ranked no.4 in Russia. She also trained him during his childhood.

Alexander Zverev's brother, Mischa Zverev, is also a tennis pro who has participated in many ATP World Tours over the years. He is currently participating in the 2021 ATP Challenger Tour. 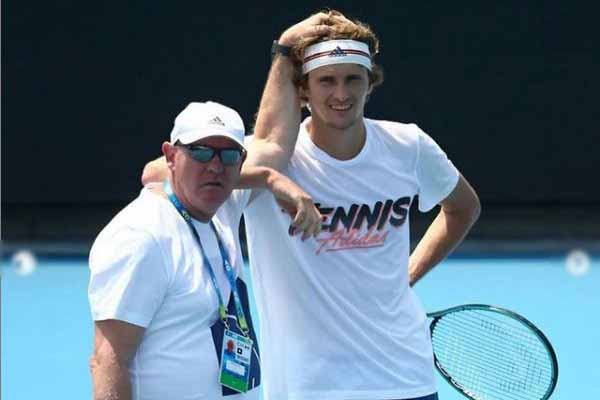 The athlete began playing tennis at the age of three. By the time he was five years old, he had practiced for at least half an hour a day. Furthermore, Zverev's mother, Irina, initially coached him and helped him master his back-hand skill. Afterward, his father, Alexander Sr., took the reign and began training him Soviet-style with heavy physical sessions.

Alexander completed his formal education in his own hometown. He then became more focused on his sports career and put a hold on his university studies.

Aforementioned, Alexander Zverev was passionate about tennis from a young age. Therefore, he debuted on the International Tennis Federation (ITF) 's match in 2011. Moreover, the following year, the young player won his first junior title at the Fujairah Junior Championships. Additionally, he bagged another Grade 5 title at the 2012 Oman International Junior. 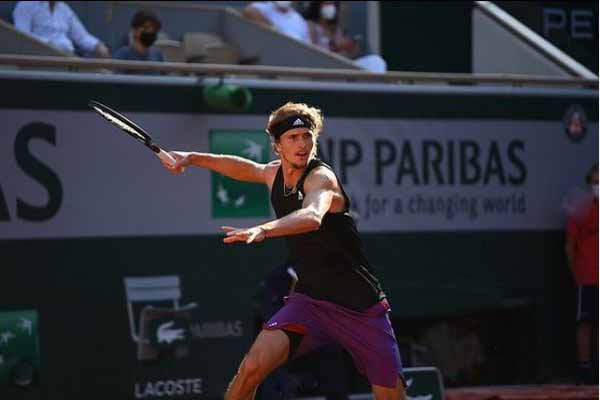 The tennis pro got his first Grade 1 title at the Open International Junior de Beaulieu-sur-Mer in 2013. After that, he won another title at the Trofeo Bonfiglio, making him the youngest champion in the tournament's history. In addition, Zverev was named the ITF Junior World Champion at the end of 2013. Afterward, he went on to compete in pro events.

Alexander Zverev entered many qualifying rounds on the ATP Tour during his junior career, but sadly, he couldn't reach the finals. Nevertheless, he beat the American tennis player Stefan Kozlov to become the winner in the 2014 Australian Open Boys' category. After that, the German athlete only got one victory among his ten matches in that year.

The sportsman obtained his first professional title at the 2014 Sparkassen Open. He defeated Tobias Kamke, Andrey Golubev, and Paul-Henri Mathieu and became the youngest titleholder since Bernard Tomic in 2009. Afterward, the player made his debut in ATP Tour at the 2014 International German Open. He ranked No.136 in the world at the end of the season.

Zverev teamed up with his brother, Mischa Zverev, at the 2015 BMW Open. The siblings finished second to the group of Alexander Peya and Bruno Soares. Then, the former junior champion won his second Challenger title at the 2015 Heilbronner Neckarcup after defeating Guido Pella and Jan-Lennard Struff.

Moreover, Alexander got his career's most significant win after beating World No.1 ranked Novak Djokovic in the Boodles Challenge. He was also named the 2015 ATP Newcomer of the Year.

The sportsperson began his 2016 season with several ATP matches. His best performance was at the 2016 Gerry Weber Open, where he became the first teen ever to beat Roger Federer. Moreover, the tennis pro won his first-ever ATP title at the 2016 St. Petersburg Open. He defeated Stan Wawrinka in the final to secure the title.

The tennis player continued his winning streak at the 2017 Rome Masters. He became the youngest person to win masters since Novak Djokovic in 2007. Furthermore, the champ got consecutive victories at the Washington Open and the 2017 Rogers Cup. As a result, he recorded his career-high ranking at No.3 on November 6, 2017. 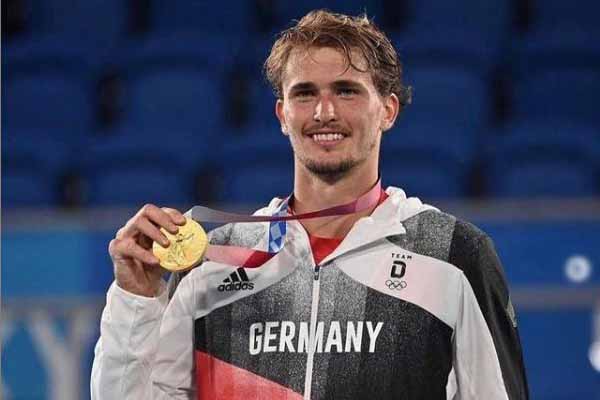 Alexander Zverev received his third Masters' trophy at the 2018 Mutua Madrid Open. He also became the only professional outside of the Big Four to have won three Masters titles. Afterward, the champ received his career's biggest title at the 2018 ATP Finals. He became the first German athlete to win season-ending tournaments since Boris Becker in 1995.

The sportsman only won a single title in 2019 at the Geneva Open. He qualified for ATP Finals but couldn't retain his title from Dominic Thiem. Moreover, the tennis star made a solid comeback at the 2020 ATP Tour. He won over Felix Auger-Aliassime and Diego Schwartzman in the finals.

Alexander made his Olympic debut at the 2020 Tokyo Olympics. He is participating in both singles and doubles matches. Additionally, the player beat Lu Yen-hsun, Daniel Elahi Galan, Nikoloz Basilashvili, Jeremy Chardy, and Novak Djokovic to reach the finals. Furthermore, he defeated Karen Khachanov 6-3 and 6-1 and became the first German player to win Olympic gold medal on August 1, 2021.

Alexander Zverev Net Worth And Earnings

The Olympian has won numerous matches on both national and international levels. As such, he has earned himself abundant wealth and vast recognition. So, Alexander Zverev's net worth mainly comprises his earnings from his professional tennis career. However, it also includes his prize money, salaries, bonuses, endorsement deals, sponsorships, etc.

As of August 2021, Zverev's prize money from singles matches amounts to $1,825,610. His total career earnings from both singles and doubles game combined up to $25,171,770. Looking at his earnings alone, we can presume that Alexander Zverev is a multi-millionaire.

Plus, as a champion of Masters 1000, Alexander Zverev must have received a considerable amount of money from his victory.

The 6ft. 6-inch athlete is also known for his height and handsome facial features. As such, he has been selected to be a brand face for many companies. Moreover, Alexander Zverev is endorsed by Richard Mille, Head Tennis, Adidas Mexico, Built 4 Tennis, Adidas Tennis, Rolex, etc. He promotes them on his social media accounts.

As for Alexander's rackets, he uses an Austrian manufacturing company, Head Tennis's brand. He initially used a Head Speed Racket before switching to Head Gravity Pro in 2019. Moreover, it is custom-made for him, and its pro stock code is TGT344.4. The specifications of his rackets are tabulated below:

The tennis star is undoubtedly earning a massive amount of money from his endorsement deals. As such, Alexander Zverev's net worth must have increased over the years.

As a famous sports figure, many people are curious about Zverev's relationships. He has been chiefly tight-lipped about his private affairs, but they are often revealed in the media by his partners.

Moreover, the player began dating his childhood friend Olya Sharypova or Olga Sharypova on September 5, 2018. The pair were together for thirteen months before parting ways. However, Alexander Zverev's ex-girlfriend, Olya Sharypova, accused him of domestic violence in late 2020. She claimed that the player abused her physically and verbally, which Alexander denied. 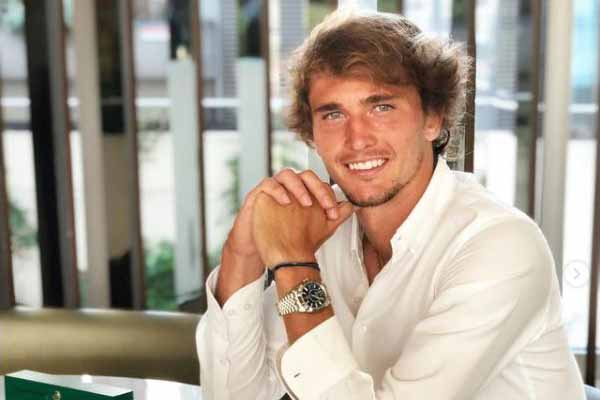 After the breakup, the sportsman moved on with German model Brenda Patea. The duo began their romance in October 2019. Furthermore, the couple was together for nearly twelve months before separating in 2020. However, after that, Alexander Zerev's ex-beau, Brenda Patea, found herself pregnant and shared the news with him.

Although the ATP champion talked about co-parenting in the media, his ex-partner denied any contact with him whatsoever. She even claimed not wanting to share the custody of her child with him. Amidst all this drama, Alexander Zverev's daughter, Mayla, was born on March 11, 2021.

Whether or not Alexander and his ex-girlfriend, Brenda, have come to an agreement is unknown. It is also unclear if Zverev has found time to visit his little girl. And while the German player has continued to succeed professionally, we hope he also finds similar success in his personal life.