Denis Shapovalov had been awarded the ATP star of tomorrow in 2017. Image Source: Denis's Instagram.

Denis Shapovalov is a professional tennis player. The young Canadian has been able to impress audiences from around the world who love the sport. He is the youngest tennis player to reach the Top 30 since 2005 and is currently ranked No.12th globally.

Dennis has risen to fame through his talent in tennis. He has performed well against many world-class players on the court and has earned his spot on the top. So far, the young sportsman has won many titles and made his country proud of him. Let us know more about Denis Shapovalov's biography and career.

Denis Shapovalov, the Canadian professional tennis player was born on April 15, 1999, to parents Tessa Shapovalov and Viktor Shapovalov, who were both Russian-Israeli citizens. His mother, Tessa, was born in Ukraine and played tennis for the Soviet national tennis team. She later migrated to Israel with Viktor during the collapse of the Soviet Union before emigrating to Canada. Denis was raised in Vaughan, Ontario, by his parents. He also has an older brother Evgeniy Shapovalov, who was born in June 1996. Though not much information is known about his brother, Denis has shared many pictures of his older sibling on his Instagram account.

Denis's mother worked as a tennis coach at the Richmond Hill Country Club, where he started playing tennis at five and quickly became obsessed with the sport. His mother, Tessa, soon resigned from her job and opened her own tennis academy in Vaughan and named it TessaTennis, to help him with the training and give him a home base while also teaching the game to other juniors. The young talent went on to attend Stephen Lewis Secondary School in Vaughan.

Denis started playing tennis when he was just 5 years old. By the time he was 13, his mother couldn't handle him on his own and had to hire Adriano Fuorivia as his coach. With Adriano's guidance, Shapovalov won numerous junior and ITF titles, including the 2015 US Open Junior Doubles title and the 2016 Wimbledon Junior Singles title. The Canadian won his first junior title at the ITF G5 in October 2013 at Burlington, Ontario, and won his second title the following year in the same event. That same year he won the singles and doubles titles at the ITF G4 in San Jose. He won his second Grand Slam at the US Open in September 2015 and the doubles title with Felix Auger-Aliassime.

A month later, Denis and his Canadian comrades Felix Auger-Aliassime and Benjamin Sigouin clinched their first Junior Davis Cup title in Canada's history. Denis was able to capture his first G1 singles title after winning in Roehampton. A week later, he became the third Canadian to win a junior Grand Slam singles title with a win over Alex De Minaur at the 2016 Wimbledon Championships. Throughout his junior career, Shapovalov collected a total of 86 wins and 32 losses.

The wonder kid from Canada defeated Australian professional Nick Kyrgios to win his first tour-level match. However, Denis lost the next round against Bulgarian professional Grigor Dimitrov, who was ranked at world No 40.

In 2017, Denis was selected to represent Canada in the Davis World Cup in their first-round against Great Britain. He lost his first opening match to Dan Evans. Following his defeat, the Canadian tennis player faced Kyle Edmund in the next round. During the game, Denis unintentionally hit the chair umpire in the eye after launching the ball aimlessly towards the crowd, following his serve drop in the third set's opening round. As a result, he was immediately disqualified for his unsportsmanlike behavior.

In March, the young Canadian won his fourth ITF Futures singles title in Gatineau after winning against Gleb Sakharov in straight sets. In the following weeks, the tennis player won his first ATP Challenger title after defeating Belgian professional Ruben Bemelmans at the 75k in Drummondville. He became the youngest Canadian to hold the challenger title till Felix Auger Aliassine's win at the Open Sopra Steria de Lyon that same year. The following month, Shapovalov went on to win his second ATP Challenger title after winning against his fellow countrymen Peter Polansky in the final of the 75k in Gatineau. He was awarded ATP Star of Tomorrow, ATP Most Improved Player, Tennis Canada Male Player of the Year, and Lionel Conacher Award in 2017.

In August, Denis defeated world No. 31, Juan Martin del Potro, and world No. 2 Rafael Nadal in his first-ever match against a top 10 player at the Rogers Cup to become the youngest player to reach an ATP World Tour Masters 1000 semifinal after his win against world No.42 Adrian Mannarino in the quarterfinals. Still, he lost to world No. 8 Alexander Zverev in the semifinals. In the US Open, Denis reached the fourth round after winning against Kyle Edmund, thus becoming the youngest player to reach the fourth round since Michael Chang in 1989. The Canadian lost to Pablo Carreno Busta, ranked world No. 19 in the fourth round. Following his career performances, Shapovalov was ranked No.51 by ATP.

Shapo began his 2018 season by competing in Brisbane International, ASB Classic, and the Australian Open. He performed well in the opening matches of the competition but was knocked out in the following rounds. He made his debut at the Delray Beach Open, where he defeated Ivo Karlovic, Taylor Fritz, and Jared Donaldson in the first three rounds. He was defeated by American professional Frances Tiafoe, who won the championship. He also entered the 2018 Mercedes Cup but lost to Indian professional Prajnesh Gunneswara in the first round. However, the young talent didn't give up and made his first appearance at Wimbledon and won against French national Jeremy Chardy before losing to Benoit Paire in the next round.

Denis began his 2019 season at the Auckland Open, where he lost to Joa Sousa in three sets. The young tennis player also competed in the Australian Open, where he came out victorious against Pablo Andujar and Taro Daniel. He was defeated in his first singles match against Serbian professional and world No.1 player Novak Djokovic. On October 20, 2019, Denis won his first ATP title at the Stockholm Open after defeating Filip Krajinovic in straight sets. He progressed his career to finish the year in the top 20 ranks, following his wins against Gilles Simon, Fabio Fognini, Alexander Zverev, and Gael Monfils to reach the semifinals of the Paris Rolex Masters. Denis won the semi after his opponent Rafael Nadal retired in the last minute to earn his first Masters 1000 final. He lost the final to Novak Djokovic to finish the season at a career-high ranking of No.15. In the 2019 Davis Cup Finals, Denis and Canadian professional Vasek Pospisil partnered up to take Canada to its first Davis Cup final after defeating Russia, Australia, Italy, and the United States. 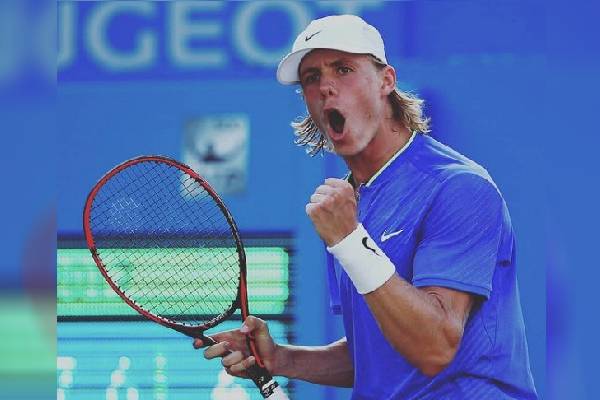 At the 2020 US Open, Shapovalov secured victories over Sebastian Korda, Kwon Soon-woo, and Taylor Fritz to reach the round of 16 for the first time since his Open debut in 2017. He won against Belgium professional David Goffin in 4 sets but lost to Spaniard Pablo Carreno Busta in the quarterfinals. Following his development and progress, Denis Shapovalov reached his career-high ranking by reaching the top 10 for the first time.

Denis Shapovalov Net Worth And Earnings

The young lad is having the prime time of his career and has been decorated as one of the best tennis players globally. So far, he has won $6,132,389 throughout his career, and we can be sure that he will continue to do so.

According to Essentially Sports, Denis Shapovalov has an estimated net worth of $4 million. However, his salary is not disclosed to the media. Denis's primary source of income comes from tennis competitions and brand endorsement deals. The young tennis star has won more than $6 million throughout his career and has been endorsed by multinational companies like Nike, Yonex, and Biosteel. He also signed a partnership deal with Tag Heuer in 2019. Though Denis is still young, we can be sure that the professional athlete will increase his fortune in the near future.

Well, Denis has been sponsored by Nike for his clothing and by Yonex for his rackets. Denis currently uses the Yonex VCORE 95 with Yonex Poly Tour Pro and Wilson Natural Gut strings. Here are the specifications of Shapovalov's racket according to Tennis predict.

The professional sportsman has been using the lightweight racket for a long time and doesn't seem to be switching to another in the near future. He has also made some alterations to his racket by adding lead in the hoop and some silicone in the handle, increasing its weight.

The Canadian/Israeli sports personality Denis Shapovalov is currently in a relationship with Mirjam Bjorklund, a Swedish professional tennis player. The lovely couple has been dating since June 2019 and has shared many moments. Denis loves to post pictures of his beautiful girlfriend, Mirjam and calls her his best friend. The duo also trains together for their competitions to make the most of their time. Though the pair has been publicly open about their relationship, the couples have not shared any details about taking their relationship to the next level. 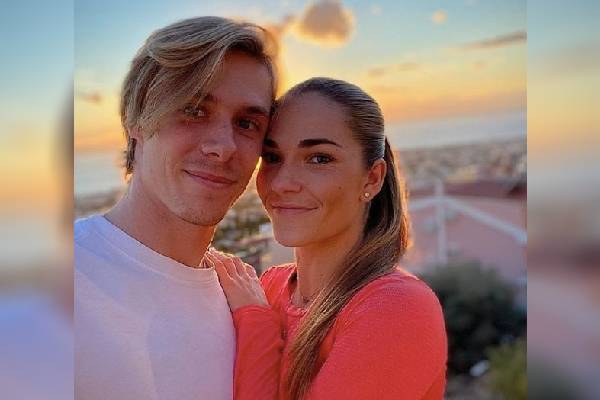 Denis was also rumored to have previously dated Penny Oleksiak, a Canadian professional swimmer. Penny was seen cheering for the tennis player while sitting next to his mother, Tessa Shapovalov.

Denis was coached by his mother, Tessa Shapovalov, for many years. Following his performance and development in 2017, his mother added Rob Steckley to his coaching team following the exit of coach Martin Laurendeau. Steckley coached Denis for two years before ending their connection in 2019. The same month he was reunited with his junior coach Adriano Fuorivia and competed in the ATP Cup 2020. Tessa later added former Russian professional Mikhail Youzhny who was ranked world No. 8 in his career. He became Shapovalov's shot selection coach, depending on Denis's weak point.