Maria Sakkari is a Greek professional tennis player who was a semifinalist at the 2021 US Open. Photo Source: Maria Sakkari's Instagram.

Men have always been at the front line of any sports, and tennis is not an exception. However, numerous female athletes have too created their imprint in the tennis world over the years. And one of such emerging female tennis players is Maria Sakkari.

Sakkari specializes in right-handed and two-handed backhands and currently ranks World No. 18 in the WTA rankings. Furthermore, the sportswoman's incredible tennis skills have earned her the highest positions in many competitions over the years. For instance, she recently competed in the semifinals of the 2021 US Open.

So, how has Maria Sakkari's sports journey been so far; let's learn in this biography.

Born Into A Tennis Family

The tennis player was born on July 25, 1995, in Athens, Greece. Her grandfather, Dimitrios Kanellopoulos, was a tennis player and coach in Athens. Moreover, Maria Sakkari's mother, Angeliki Kanellopoulou, is a former tennis pro with two ITF titles under her name. She ranked World No. 43 in her WTA career.

Although Maria Sakkari's father, Konstantinos Sakkaris, doesn't have a tennis background, he highly supports her career choice. Likewise, she has two siblings, a brother Yannis Sakkari and a sister Amanda Sakkari. 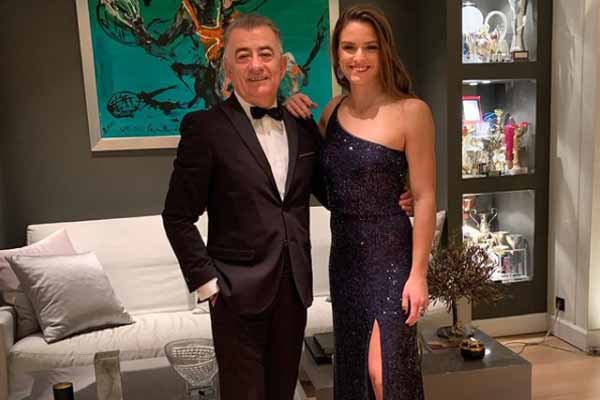 The sportsperson began playing tennis at the age of six. By the time Sakkari turned eleven, she had started to compete in local tournaments. Soon after, the teen participated in junior competitions. She continued to play on ITF Circuit while attending high school.

After graduation, Maria moved to Barcelona and got admitted to a tennis academy. She trained under German Puentes and later made her WTA debut.

Maria Sakkari Net Worth And Career

The sportswoman has competed against some of the most significant tennis players on the court. Her quickness and powerful serves have earned her many fans over her career years. So, Maria Sakkari's net worth comprises of her earnings from her sports career. However, it also includes her prize money, bonuses, earnings from endorsement deals, etc.

The Greek native's prize money from all of her matches amounts to $4,423,164 as of September 2021. Although she isn't the highest-paid or the richest female tennis player, she is undoubtedly making a fortune from her profession.

Maria Sakkari was part of the Greek Fed Cup team from 2012-2016. During that period, she tried to qualify for WTA several times but failed. Eventually, the newcomer was selected for the 2015 US Open and defeated Anastasija Sevastova, An-Sophie Mestach, and Petra Martic in the qualifying round. Sadly, she couldn't win against Wang Qiang in the first round.

Nevertheless, the tennis pro closed the season with three singles titles and one doubles title on ITF Circuit. She received her first Grand Slam match win by defeating Wang Yafan in the 2016 Australian Open. Afterward, the athlete faced several losses in the Mexican Open, Indian Wells Open, and Miami Open.

Maria scored her second WTA Tour win at the 2016 Istanbul Cup. She reached the quarterfinal by beating Anna Karolina Schmiedlova and Hsieh Su-Wei before losing to Danka Kovinic. In addition, the player won her first Wimbledon match against Zheng Saisai. It resulted in her career-high rankings of 97.

Sakkari's rankings reached the top 50 after reaching the semifinal at the 2017 Wuhan Open. She had a strong offense against Donna Vekic, Ashleigh Barty, and CoCo Vandeweghe in the 2018 BNP Paribas Open. Furthermore, the sportswoman's reached her first WTA final at the 2018 Silicon Valley Classic. She upset Christina McHale, Timea Babos, Venus Williams, Danielle Collins and reached No.30 in the WTA rankings.

The tennis player won her first title at the 2019 Morocco Open. She earned $226,750 from her victory against the reigning champion Elise Mertens. In addition, Maria completed the season with five top-ten wins overall.

Maria Sakkari won her first and only WTA title at the 2019 Morocco Open and received $226,750 in prize money. Photo Source: Maria Sakkari's Instagram.

The champ had her career's most significant win by beating Serena Williams at the 2020 Cincinnati Open. Then, she continued her momentum at the 2020 US Open, where she gained victories against Stefanie Vogele, Bernarda Pera, and Amanda Anisimova.

The athlete shocked the world by stopping Naomi Osaka's 23rd match-winning streak at the 2021 Miami Open. However, her place at the final was cut short by another semifinalist Bianca Andreescu.

Sakkari gave an outstanding performance at the 2021 US Open. She became the first Greek female semifinalist at the US Open by beating Petra Kvitova, Bianca Andreescu, and Karolina Pliskova. But, unfortunately, she lost to British tennis player Emma Raducanu and failed to secure a place in the finals.

Although she lost the match, Maria will be returning home with $675,000 from the tournament. At present, her career earnings from singles amount to $882,545.

Thus, Maria Sakkari's net worth must have risen over the years.

Alongside her tennis skills, Maria Sakkari is known for her looks and physical features. She is a brand ambassador for Adidas Tennis, Nestle Fitness Greece, APIVITA, Focal, etc.

Speaking of Maria's rackets, they are customized by Wilson Tennis. She currently plays with the first model of Wilson Ultra, better known as Ultra 100 Reverse. In addition, the sportsperson strings her racket with Luxilon Alu Power 1.25. Unfortunately, it isn't available for sale, but similar models can be bought for $229 each.

Some of the specifications of her racket are tabulated below:

As a famous Greek tennis player, the brunette beauty is certainly not lacking any suitors. She was previously rumored to be dating Stefanos Tsitsipas. However, both parties denied the rumors.

Nonetheless, the athlete isn't single and has given her heart to her partner. Maria Sakkari's boyfriend, Konstantinos Mitsotakis, is the son of Greek Prime Minister Kyriakos Mitsotakis. Many of his relatives are in the highest positions within the conservative New Democratic Party of Greece.

The pair began dating in 2020 but only revealed it a year later. Both rarely appear in public together, but the duo's affection is reflected in Sakkari's Instagram posts.

Furthermore, Maria has credited her partner for her excellent performance at Roland Garros. She also opened up about him being an understanding and supportive guy.

Although Maria Sakkari has lost one of her most prominent matches, she still has a long way to go. Hopefully, she will not be too disheartened and develop a solid mentality to compete in the future.