Daniil Medvedev is an emerging talent in the tennis world, and the ATP ranked him World No. 2 on March 15, 2021. Moreover, the athlete has won twelve titles in his sports career, three alone in 2021. In addition, he is one of the few players who has defeated the tennis' top three pros.

The sportsman is a baseliner specializing in two-handed backhand and powerful serve. He is quick to counterattack with appropriate depth, pace, and precision in the court. Furthermore, the tennis player always sets his bar high and plays to earn the title.

So, let's get to know about Daniil Medvedev's tennis journey in this biography.

Began Training From A Young Age

The tennis pro was born, Daniil Sergeyevich Medvedev, on February 11, 1996, in Moscow, Russia. He was born preterm in the eighth month to parents Sergey Medvedev and Olga Medvedeva.

Daniil Medvedev's father is a computer engineer and has a civil engineering business. His mother was the first one to encourage him to take tennis lessons.

The player is the third child in his family. He has two older sisters named Julia Medvedeva and Elena Medvedeva.

Medvedev was initially taking swimming lessons before switching to tennis at the age of nine. He became a disciple of Ekaterina Kryuchkova and began learning from her. Moreover, alongside tennis, young Daniil was good in academics. He attended a specialized school where he studied math and physics. 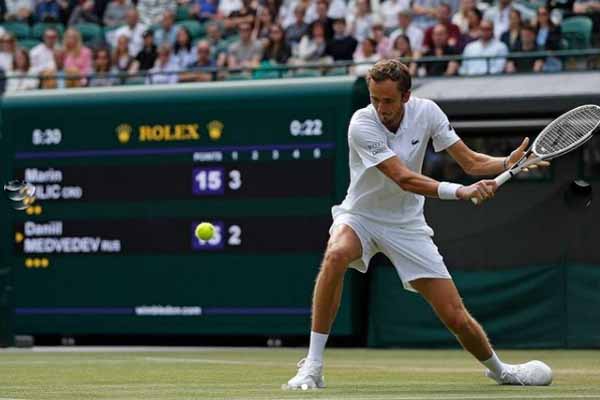 After graduating early, Daniil enrolled in the Moscow State Institute Of International Relations to major in economics and commerce. However, he quit it mid-way to focus on tennis. Later, he was admitted to the Russian State University of Physical Education, Sport, Youth, and Tourism, where he received his diploma as coach.

Daniil Medvedev Net Worth And Career

As a World No.2, the sportsperson is at the centerfold of attention in the court. He has gained both wealth and fame from his tennis career. So, Daniil Medvedev's net worth mainly covers his earnings as a tennis player and prize money. He also earns a considerable sum from endorsements, sponsorships, merch sales, etc.

The Russian native's career earnings from both singles and doubles are $17,293,705 as of September 10, 2021. He currently ranks 32nd in the ATP Prize Money Leaders list. However, as Daniil's career is progressing more, his earnings are bound to increase in the future.

Daniil Medvedev's family moved to France in 2014. There he went to a tennis academy and turned pro. Moreover, the newcomer's ATP debut was in the 2015 Kremlin Cup. He joined the doubles event with Aslan Karatsev winning their first match together. However, the pair lost to Radu Albot and Frantisek Cermak in the second round.

The tennis player's ATP singles match debut was at the 2016 Nice Open as a qualifier. His first ATP World Tour win was at the 2016 Ricoh Open against Horacio Zeballos. Furthermore, the sportsman advanced to the ATP finals for the first time in the 2017 Chennai Open. Unfortunately, he lost the round to Spanish player Roberto Bautista Agut.

The 6 ft. 6-inch tall athlete scored his first Grand Slam win at the 2017 Wimbledon Championships. While he failed to advance to the 3rd round, Medvedev kept on his momentum in the 2018 Sydney International. In addition, Daniil won his first ATP title by defeating Alex de Minaur in the finals and pocketed thousands of dollars as prize money.

Medvedev's career's biggest win was in the 2020 ATP Finals. He consecutively defeated Novak Djokovic, Rafael Nadal, and Dominic Thiem to clinch the trophy. Moreover, he received $5,700,000 in prize money and even became the first tennis player to defeat the Top three players in tournament history since 2007. 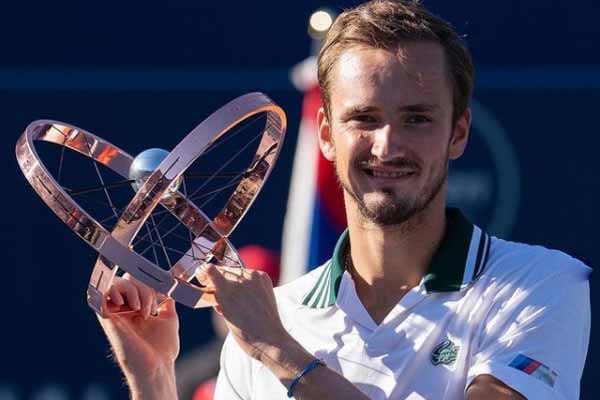 The 2020 ATP champion kicked off the following season with victories against Diego Schwartzman, Alexander Zverev, Matteo Berrettini, etc., in ATP Cup. In addition, he reached his career-high ranking of No. 2 after winning the 2021 Open 13. He upset the French athlete Pierre-Hugues Herbert in the finals.

After a short hiatus from testing Covid-19 positive, the sportsman has made an incredible comeback in the court. He is currently participating in the 2021 US Open. In addition, the player has defeated Pablo Andujar, Dan Evans, Botic van de Zandschulp, etc., to reach the semifinal. He will compete against Canadian-born Felix Auger Aliassime on September 11, 2021, to secure a place in the finals.

With his consistent wins, several brands and companies have endorsed Medvedev over the years. He is a brand ambassador for BMW, Bovet 1882, Tinkoff, HyperX, etc. Moreover, the tennis player's apparel is custom-made by Lacoste Tennis Clothing, while Nike designs his footwear.

As for Daniil Medvedev's racket, he uses French brand Tecnifibre's products. His racket, racket bag, and strings are all customized by the company. Furthermore, the sportsperson uses Tecnifibre T-Fight 305 with Tecnifibre Razor Code strings. They are available for $221.78 (£159.99) in the market.

Below are the specifications of his rackets:

Thus, Daniil Medvedev's net worth is undoubtedly benefitting from his multiple endorsement deals. Also with his continuous success, there is no doubt that Daniil is already a multimillionaire.

As a rising tennis star, many people are curious about the sports personality's marital status. Luckily, he isn't private about his other half in public. Moreover, Daniil is married to his long-time sweetheart Daria Medvedeva. The latter also works as his assistant and attends his every match.

The pair met in 2014 and have kept much of their relationship away from the media. It is unclear when they got engaged, but Daniil and Daria tied the knot on September 12, 2018.

Daniil Medvedev's wife, Daria Medvedeva, used to play tennis until 17-18 before quitting it due to injuries. He often credits his success and improvement to his partner. In addition, the professional tennis player has shown his gratitude to his lady love for making him a better person and player. He often poses next to her on his Instagram account. 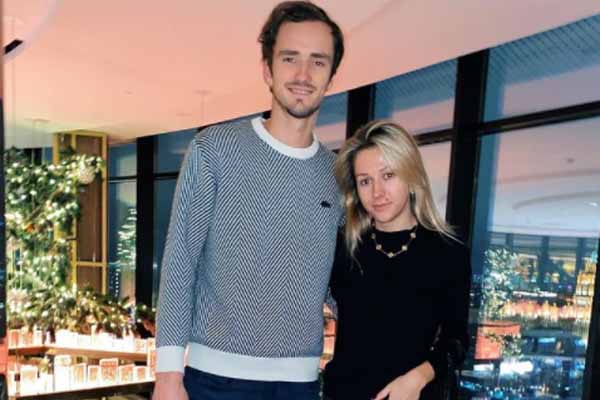 The couple doesn't have any children at the moment. But, who knows, we might receive good news in the upcoming days.

Daniil Medvedev is a hardworking and formidable opponent in the field. Although he had previously shown some anger and violent tendencies, he is now controlling his temper and improving his game more each day. Hopefully, he will be crowned the 2021 US Open winner in the following days.