Cameron Norrie is a professional tennis player. The athlete has been able to win the hearts of many sports fans with his impeccable skills. Moreover, he reached a career-high ranking in doubles of No. 142 on September 9, 2019. This victory was achieved by Cameron within a short period of his debut in tennis.

The sportsman is well-known for his left-handed serve in tennis matches. He has defeated many of his opponents with his retrieving and tempo skills. So far, the British player has brought home many titles and prize money. Let's get to know more about Cameron Norrie's life and career.

The British tennis player was born on August 23, 1995, in Johannesburg, South Africa. His father, David Norrie, is a Scottish microbiologist. On the other hand, Cameron Norrie's mother, Helen Williams Norrie, has Welsh ancestry. He was raised in Auckland, New Zealand, by his parents. In addition, Cameron also has a beautiful sister named Bronwen Norrie.

The player completed his formal education at Macleans College in New Zealand. He was passionate about the sport from a young age. So, Cameron Norrie joined Tennis NZ and played for New Zealand initially. In addition, he also played at the Junior Australian Open and ranked tenth in the world. Unfortunately, Tennis NZ didn't emphasize their young talented player. Cameron was also paid very little for his overseas travels. As a result, he switched his allegiance to Britain to pursue a better career opportunity. 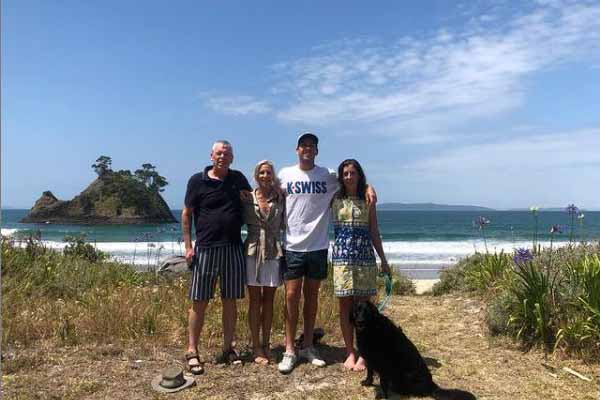 The young athlete went to live in London where he trained at the National Tennis Centre for two years. Sadly, Cameron was unable to win a match during that time and lacked the desire for the game. After that, Cameron Norrie's mother, Helena, decided to enroll him in an American University to help him rediscover his passion.

Cameron Norrie was enrolled in Texas Christian University, where he played for the Horned Frogs. The college proved to be a good choice for the emerging tennis player. He was All-American three times in his university tennis career.

Moreover, the Intercollegiate Tennis Association ranked Cameron Norrie No. 1 in the Men's National Singles Ranking in 2017. Despite getting more success, the young athlete decided not to participate in the last season of the NCAA championship and left the university to become a professional player.

Before becoming a professional tennis player, Cameron Norrie was coached by David Roditi and Devin Bowen.

Beginning Of A Professional Tennis Career

Aforementioned, Cameron Norrie left college to become a professional in 2017. The player became a pro after participating in the 2017 Aegon Surbiton Trophy. After that, he made his ATP debut at the 2017 Aegon Championships. Sadly, Cameron was defeated by Sam Querrey in the first round.

Norrie won his first ATP trophy after defeating Horacio Zeballos at Eastbourne. The winning streak of the British player continued and as a result, Cameron won his first challenger title in July 2017.

Cameron Norrie made his Australian Open debut in 2018. He joined the British team for the 2018 Davis Cup against Spain. Moreover, the sportsman achieved the most significant career win by beating Roberto Bautista-Agut in five sets in his first match. He then qualified for ATP World Tour Masters 1000 but lost to Taro Daniel in the first round. Furthermore, Cameron Norrie also was defeated by Nicolas Jarry in the first round of the 2018 Miami Open.

The pro tennis player got a wildcard entry at the 2019 Auckland Open. He had a successive win over Benoit Paire, Joao Sousa, Taylor Fritz, and Jan-Lennard Struff and reached ATP Final. Moreover, Norrie reached the top 50 for the first time after becoming an ATP 500 semi-final contestant.

Cameron Norrie's career went through lots of wins and losses in 2019. He defeated Adrian Mannarino and Marton Fucsovics and reached the third round of the 2019 Monte-Carlo Masters. In addition, the competitor was qualified for European Open but lost to Feliciano Lopez. He also was not able to redeem himself against Milos Raonic in Paris Masters. 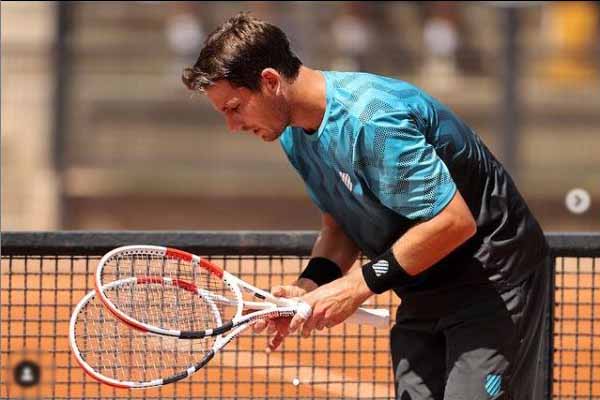 Cameron Norrie has won many matches and competed against the best tennis players of the world. Photo Source: Cameron Norrie's Instagram.

The sportsperson started 2020 by competing in the 2020 US Open. He was able to succeed over Diego Schwartzman and Federico Coria in the first two rounds. But Norrie lost his momentum when facing Alejandro Davidovich Fokina.

At the 2021 Estoril Open, Cameron Norrie secured a place in the final. He earned his career's biggest win against an Austrian professional, Dominic Thiem, in May 2021. He continued his victory over Arthur Rinderknech to qualify for the semi-finals and reached finals after taking over Karen Khachanov. Moreover, Cameron reached the round of the 2021 French Open defeating Bjorn Fratangelo and Lloyd Harris.

Cameron Norrie has once again shown his tennis prowess in the 2021 Queen's Championships. He was qualified for the semi-finals after defeating Russian pro-tennis player Aslan Kazbekovich Karatsev. In addition, the British professional closed the semi-final match with a win over Canadian tennis player Denis Shapovalov on June 19, 2021. It set the record for Cameron Norrie to be the third player of Britain to reach the finals in the Queen's Championship.

Furthermore, Cameron Norrie will face Italian professional tennis player Matteo Berrettini in the finals. Furthermore, both athletes are facing off against each other for the first time. Matteo has won all the matches in the tournament and has also claimed several titles in previous games. On the other hand, this will be the first title match for Cameron Norrie.

Sports enthusiasts are very eager for this match as it between Cameron Norrie, an underdog, and Matteo Berrettini, a champion.

The tennis player's career is soaring high and getting more recognition by the sports fans. As a result, he has accomplished a fortune from his career alongside his popularity. Furthermore, the athlete has earned $2,270,788 prize money throughout his career. His earnings from singles match amount to $487,531. In addition, Cameron's prize money from doubles totals up to $15,708. 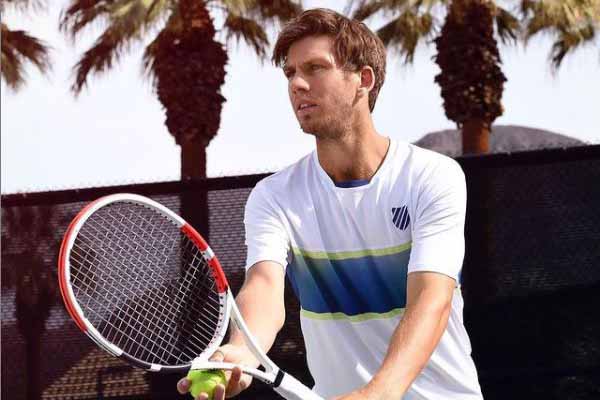 Cameron Norrie's net worth mainly comprises his income from his sports career. Besides that, Cameron Norrie has also been sponsored by famous brands and companies. His payment from the endorsements also increases his total worth.

Aforementioned, Cameron Norrie has promoted several brands and products throughout the years. He signed a multi-year contract with K-Swiss for their apparel and footwear products. Norrie's Men's K-Swiss Ultrashot 3 tennis shoes are making great sales in the market. In addition, Queen's Championship finalist was previously endorsed by Ellesse.

As for Cameron Norrie's rackets, he uses French company Babolat's products. The sportsman has enforced several racquets, overgrip packs, and racquet holders by himself. Below are the specifications of his new Babolat Racket:

The rising tennis star surely earns a massive sum through his sponsors and will continue to do so with growing popularity. And therefore, Cameron Norrie's net worth might see considerable growth in the coming days.

The sports personality is a private person and mainly keeps his relationship under wraps. Looking at his Instagram account, the athlete seems to be in a relationship with interior designer Louise Jacobi. The pair posts pictures together on their social media handles. Moreover, Cameron Norrie's girlfriend Louise has also uploaded photos of their traveling and dates on her Instagram. 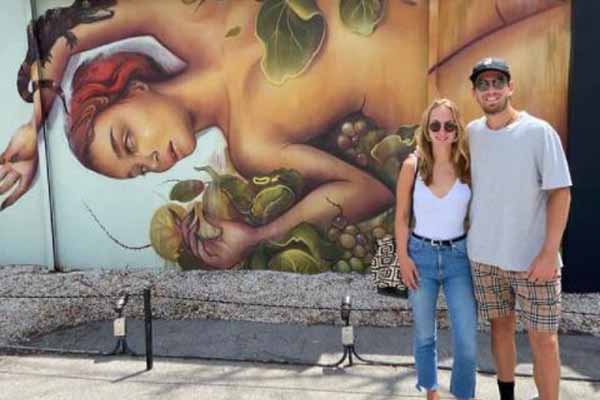 Cameron Norrie is in a relationship with the beautiful Louise Jacobi. Photo Source: Cameron Norrie's Instagram.

While they have shared pictures of each other on social media, neither Cameron nor Louise has talked about their relationship. There is not much information about the beginning of the couple's affair. But, Cameron Norrie seems to adore his partner.

Let's hope we get to see more of Cameron and his lover, Louise in the coming days.