Oscar Piastri is an Australia-born race car driver. He is a member of the Alpine Academy and the reigning champion of the FIA Formula 3 championship. Furthermore, the race car driver began his racing career in 2016 and has won several tournaments and races. He has raced in Formula 4, Formula Renault Eurocup, and FIA Formula 3 Championship.

Oscar Piastri was born on April 6, 2001, in Melbourne, Victoria, Australia, and he was raised there with great love and care. Oscar's father, Chris Piastri, used to kart with him when he was a child, and he would take Oscar to all his races. Chris was his son's mechanic when he was competing in Australia. He regards his father as the first and most significant influence in his career.

Well, Oscar also adores his mother a lot. After gaining victory at Formula Renault Eurocup weekend at Silverstone, he dedicated his win to his mom. There might not be enough details about his family, but we know that he did grow up alongside his sisters. 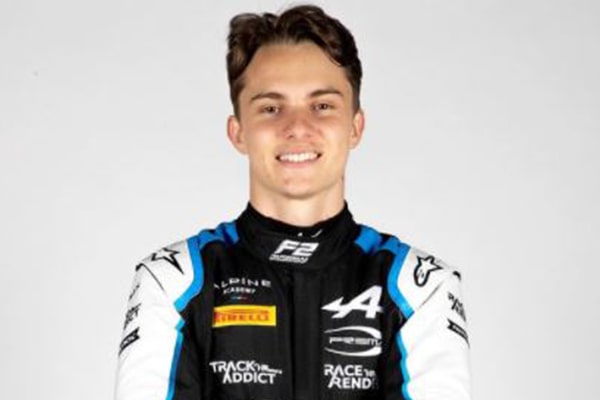 Talking about Oscar Piastri's education, until 2015, he attended Haileybury College, Melbourne, Australia. Then, he transferred to Haileybury College, Hartford, UK. There, he studied from 2016 to 2019. However, his major in college has not been revealed yet.

Oscar Piastri began karting in 2011 and went professional in 2014. During his karting career, he participated in several championships and won various titles. In 2014, he partook in several Australian championships like the Australian Kart Championship, City of Melbourne Titles, and many more, where he finished in different positions. In 2015 and 2016, he started competing in European and other CIK-FIA sanctioned championships with Ricky Flynn Motorsport. He achieved significant success in his karting career.

In 2016, Oscar joined the Dragon F4 for Formula 4 UAE Championship. It was his single-seater debut, and in the championship, he claimed two podiums and became sixth. The following year, in 2017, TRS Arden named him one of the four drivers for their F4 British Championship campaign. He was listed along with Ayrton Simmons, Olli Caldwell, and Yves Baltas.  In the championship, he finished in second place after Jamie Caroline.

In 2018, Oscar partook in the three-day end-of-season GP3 test at Abu Dhabi with Trident.

In 2018, Piastri debuted in the Formula Renault Eurocup championship with the Arden Motorsport team. He finished the ninth in the tournament. In December 2018, he signed with R-ace GP for the match. He gained his first victory at Silverstone, and a day later, he achieved a second win at the same venue. After his victory at Spa-Francorchamps in July 2019, he became the first driver to win three races that season. Then, with a win and fourth place in the final round at Yas Marina, he became the champion.

In October 2019, the talented racer Oscar Piastri joined the FIA Formula 3 post-season test for Prema Racing, with Frederik Vesti, Enaam Ahmed, Enzo Fittipaldi, and Logan Sargeant. In January 2020, he, along with Sargeant and Vesti, were signed by the Italian outfit to contest in the 2020 FIA Formula 3 Championship. For his first race at the Red Bull Ring, Oscar started third and went on to claim the victory. Furthermore, he took consecutive second-place finishes at both Hungaroring races and the first Silverstone feature race. 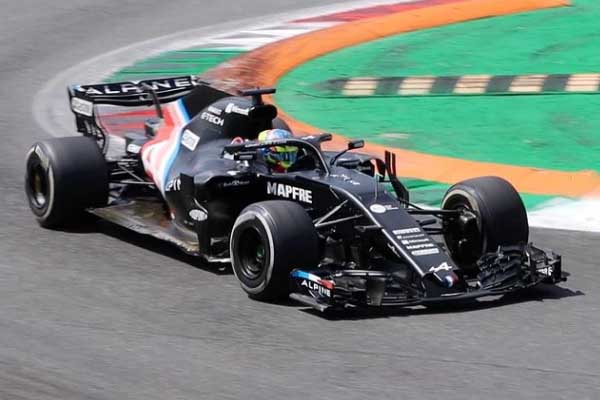 Furthermore, for the sprint race in Barcelone, Oscar started fifth and went on to claim his second victory. During the Monza qualifying, he was penalized for impeding Jake Hughes and started the feature race in 15th place. During the final feature race at the Mugello Circuit, he had lined up 16th on the grid but failed to score points after finishing 11th.

For the 2021 F2 season, Oscar signed with Prema, replacing Mick Schumacher, in December 2020. He will be partnering with Ferrari Driver Academy member Robert Shwartzman for the season. In the first sprint race, he finished 5th, and in the second race, he started from 6th and took the lead after overtaking Alpine junior Guanyu Zhou. He led the Championship with 21 points after the victory in the second sprint race.

During the final race of his debut weekend in Bahrain, Oscar was in a crash. The crash happened after the British driver Dan Ticktum passed him inside turn one and was half a car length ahead. Although Oscar had the inside line for turn two, Ticktum trended in, and both of them made contact, resulting in Oscar into a spin and out of the race.

Nonetheless, the F2 driver made a stunning comeback in the 2021 Formula 2 Championship. He defeated the odds by moving from tenth to third at Yas Marina in Abu Dhabi in the final race. Moreover, the racer passed Shwartzman at the last three laps to secure a podium finish. As a result, he became the FIA Formula 2 Champion of 2021. 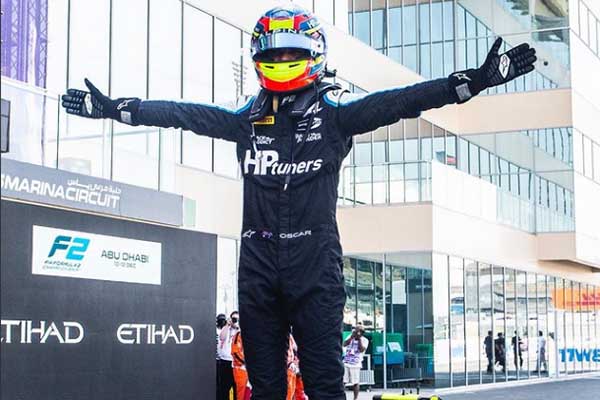 The victory also marked Piastri's third consecutive championship, following Renault Euro Cup and F3 titles in 2019 and 2020. It also opens up more opportunities for him to finally fulfill his long-awaited F1 dream.

In January 2020, Oscar joined the Renault Sports Academy. He secured the FIA Formula 3 Championship and was rewarded with a young driver's test in Bahrain in October 2020 by the Renault F1 Team. He was awarded along with fellow Renault Sport Academy drivers Christian Lundgaard and Guanyu Zhou.

Alpine Formula 1 team has selected the formula driver as their test and reserve driver for the 2022 season. He will undoubtedly show more excellent performance in F1 in the upcoming days.

Oscar has achieved significant success in his career. He is still very dedicated to his profession, so there's no doubt that he will achieve immense fame, fortune, and success in his racing career.

As stated earlier, the talented racer Oscar Piastri has achieved considerable success in his career. With the various races and tournaments that he had partaken in and will be participating in in the future, there's no doubt that he has garnered enormous fortune. Oscar Piastri's net worth might be in the millions. As race car drivers earn $40,904 as an average salary per year, Oscar's fortune must be of a grand sum. 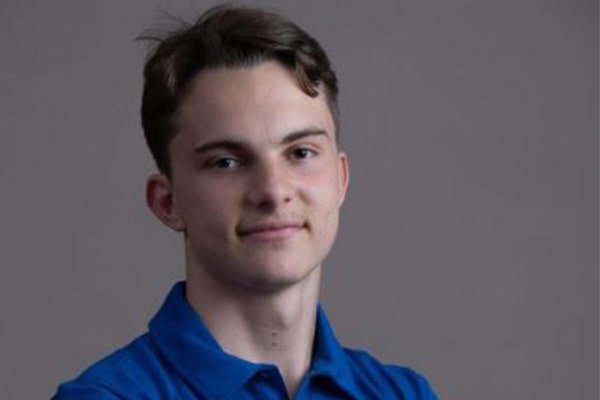 Furthermore, Oscar's net worth also comprises the prize money he has won by participating in several championships. As the winner of the Formula Renault Eurocup 2019, Oscar earned $608,162 as the prize money.

Likewise, the race car driver's recent F2 Championship win must have brought him thousands of dollars. Hence, he must have earned considerably through several championships that he has won.

With the fame and popularity of the talented and handsome racer Oscar, he must be getting several sponsorship offers and endorsement deals. These offers have also contributed to Oscar Piastri's fortune. All thanks to his fortune, he is able to live a comfortable and lavish lifestyle. He lives a happy life with his family in Oxford, UK.

Talking about Oscar Piastri's girlfriend, the talented racer is indeed in a relationship. However, he has not revealed who his partner is. But in an interview, he mentioned that his girlfriend goes to university. Furthermore, when asked how he spends his weekend away from the racetrack, he said he spends the time chilling out on the PlayStation and some time with his girlfriend.

Well, Oscar is at times seen with Lily Zneimer. So is Lily Oscar Piastri's girlfriend?

Despite the fame, Oscar seems to be a private person and loves to keep his lovelife secret. Nevertheless, the famous driver, Oscar Piastri's girlfriend, must be lucky to date such a handsome and talented racer like him. Therefore, we can hope that his lovelife also becomes successful, just like his professional life, and we get to know more about Oscar Piastri's girlfriend in the future.

Recently, the Alpine Formula One team and Oscar Piastri, who was likely to replace Fernando Alonso in the coming season, have engaged in a highly public conflict. The team declared on August 2nd, 2022 that Piastri will take Alonso's place; however, the Australian driver then issued a statement of his own denying he would be racing for Alpine. Some sites even say that the dispute might move to the legal system.

When Alonso, a two-time world champion, unexpectedly announced on August 1st, 2022, that he was quitting Alpine to join Aston Martin, the French team stated that it completely caught them off guard. Similarly, Fernando promised them he was close to reaching a new agreement up until the Sunday of the Hungarian Grand Prix. After Alonso made it apparent that he would be joining Aston Martin, Alpine moved quickly to say that they would honor their contract with Oscar, who serves as the team's reserve driver.

However, Piastri who is rumored to have been in talks to join McLaren was notably missing from the statement and did not offer any commentary. A few hours later, he immediately denied having any plans to race for Alpine. Posting on his social media, he mentioned that without his agreement, Alpine F1 had put out a press release that he was driving for them in 2023. Furthermore, Oscar added saying, that was wrong and he has not signed a contract with the team for 2023 and that he would not be driving for Alpine next year.