Polish racing driver Gosia Rdest has had an extensive racing career and has participated in more than a hundred races. Photo Source: Gosia's Instagram.

Polish racing driver Gosia Rdest has become a well-known name globally thanks to her extensive participation in races and commendable performances. She is one of the most famous female racing drivers to come from Poland. The racer is a part of the all-women racing series, W Series.

The highly celebrated motorist has left her mark on the racing tracks since she first started racing at twelve. Although the Polish driver has not made many big wins in her career, her performance has allowed her to reach new heights. Let us learn more about the famous Gosia Rdest.

Born on the 14th of January, 1993, as Malgorzata Rdest, Gosia lived a very modest life with her family. Gosia Rdest's mother, Agnes Rdest, is a florist, while her father, Christopher Rdest, ran a medical waste management company. She is very close to her parents, and they are incredibly supportive of her.

Gosia is undoubtedly the closest to her great-grandmother, Zivta Rdest. She would rush to her great-grandmother every time she won a trophy or won anything to show it to her. Moreover, Gosia has stated that she has become the most significant inspiration due to Zivta surviving WW1 and WW2. And her kind words would help Gosia Rdest push to better herself in the male-dominated industry. 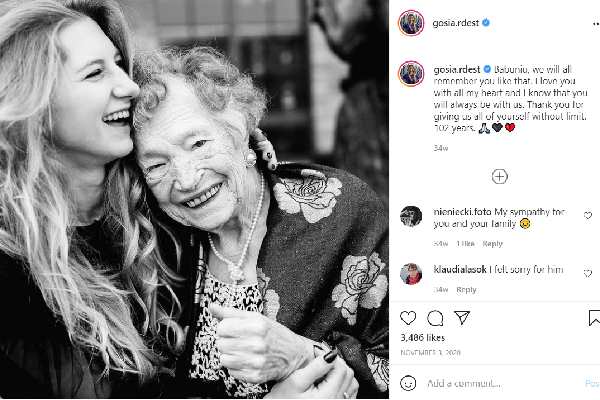 Gosia Rdest's biggest supporter, her great-grandmother, passed away at the age of 102. Image Source: Gosia's Instagram.

Unfortunately, Gosia Rdest's great-grandmother passed away in the November of 2020 at the age of 102. The times must have been hard for her as she loved her so much.

The Polish Twitch streamer is yet to talk about her school life and the school she attended. However, on the official W Series website, it has been stated that Gosia Rdest has a master's degree in journalism. It is indeed commendable that the racing driver was able to complete her studies while still having such an exciting career.

The passion for racing was sparked for Gosia Rdest after a family trip shopping. Then, the young and adventurous racer and her father went to a nearby karting track. After that, young Malgorzata was hooked on the thrill of racing and wanted to pursue a career as a professional racing driver. By the age of 16, Rdest was racing professionally and also winning the Polish Karting Championship.

After being the reigning champion at the Polish Karting Championship for two years, the young competitor was picked by BMW motorsport to participate in the Formula BMW Talent Cup as a rookie driver. After finishing in 10th place in the series, she moved up to the BRDC Formula 4 Championship. There, she finished in the eighteenth position.

Gosia Rdest has been able to compete in over a hundred races over the course of her career. Photo Source: Gosia's Instagram.

The racer would keep on striving forward and participated in the 2014 Central European Volkswagen Golf Cup, where she finished 14th.

Despite the numerous difficulties in the other series, the young competitive driver was determined to make a place for herself in the racing world. Therefore, her happiness knew no bounds when she was selected to race in the Audi Sport TT Cup. Gosia was able to compete in three seasons, with her best finish being in the 6th place of the 2017 season.

W Series is a women-only racing series that was launched to push women forward to participate in the Formula 1 races. Gosia was lucky enough to be selected in the maiden season of the series. But, unfortunately, the Polish racing driver was able to finish 14th in the 2019 season with no podium finishes.

This meant that Gosia Rdest did not have a certainty to return in the next season. However, the racer worked hard and was able to make a return for the 2021 series. She has shown immense improvement in her performance and ranks better than her previous seasons. This season she races alongside Irina Sidorkova, Alice Powell, and Marta Garcia.

In addition to the aforementioned series, the racing driver has participated in numerous other racing series. Some of them include the GT4 International Cup, GT4 Central European Cup, and the Alpine Europa Cup. Moreover, the motorist has shown exceptional performance in the Dubai 24 Hour as she has won the series twice. Here is a list of races that Gosia Rdest has performed exceptionally in.

Gosia was able to win the 2018 Dubai 24 Hour alongside her teammates Joonas Lappalainen, John-Louis Jasper, and Philip Ellis. Similarly, she won the 2020 Dubai 24 Hour with Oliver Hancock, John Hartshorne, and Jukka Honkavuori.

Despite her extensive career, it is clear that Gosia Rdest is nowhere near her retirement. She still has a lot of racing spirit left in her and will continue to move forward. We wish her good for her future in racing and all other endeavors.

Gosia Rdest Net Worth And Earnings

Like many other racing drivers, the Polish national has also preferred to remain quiet about her finances. So, naturally, no proper source can give an accurate estimate of Gosia Rdest's net worth. However, judging by the frequent snaps of travels on her Instagram page, the racer must earn a good sum of money and live a comfortable life. 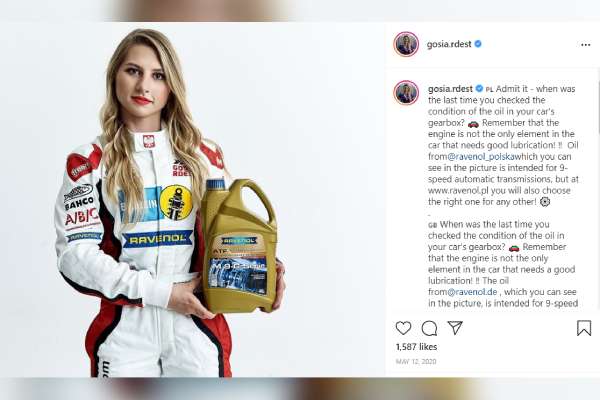 Polish racing driver Gosia Rdest has been sponsored by many brands for the numerous races she has participated in. Image Source: Gosia's Instagram.

Moreover, the motorist has participated in numerous series and over a hundred races. Although she does not have many notable wins in series, she has certainly won multiple races. Based on the competition she participates in, she must earn quite a paycheck.

In addition to the prize money, she has been sponsored by name brands involved in cars and their essentials. It is next to impossible to participate in a race without a proper sponsor in today's times. This is why Malgorzata is fortunate enough to have been picked as the face of a brand.

Also, the female racing driver is a competitor at the W Series, which has a huge prize budget of $1.5 million. Out of that colossal sum, $500K goes to the winner while the remaining $1 million is divided among the racers. Therefore, based on the placement of Rdest, she can make a good chunk of money from the series. Moreover, she is on the Puma W Series team alongside Marta Garcia.

The motorsport enthusiast also has a YouTube channel named where she shares videos of her races and her reviewing items. Unfortunately, since the channel is primarily Polish, it has not been able to make a considerable following.

But with her immense popularity, the channel will undoubtedly gain more subscribers soon enough. And hopefully, earnings from the channel with increase soon to aid Gosia Rdest's net worth.

Malgorzata also has a Twitch streaming account where she has streamed herself playing a game named Zwift. The game requires one to physically bike to keep up with the race on the stream.

Just like the YouTube channel, the twitch stream, too, was primarily Polish. That may be a reason why the streamer does not have much following. Although she may not have that many streamers, Gosia is undoubtedly set to return to streaming one day and earn a considerable sum in the process.

Polish racer Gosia Rdest has been a person of interest due to her extensive and impressive racing career. Moreover, the motorsport enthusiast is a young and beautiful woman. Evidently, the public is very invested and probing in her personal and love life. The interest in her personal life has left many wondering about her relationship status.

Well, Malgorzata is engaged. Gosia Rdest's fiance, Karol Lazarczyk, popped the question in early June of 2021. Karol is a massive motorsport enthusiast who has a keen interest in cars. But, unfortunately, it is not known what he does for a living. 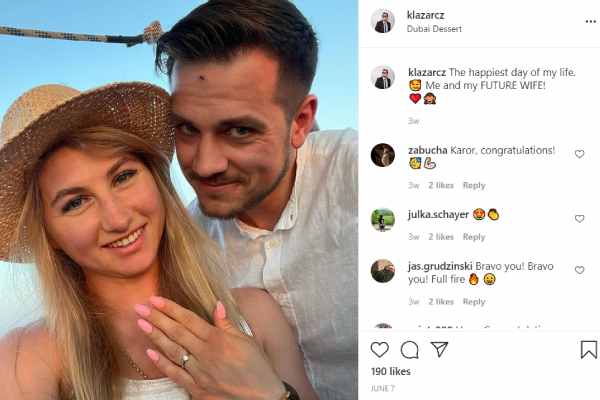 The motorsport enthusiast and her fiance have not set a marriage date yet. But, looking at how much they love one another, it could be very soon. For now, the racing driver and her husband-to-be enjoy traveling while attending her races. Whenever their wedding may be, it is sure to be a beautiful one full of love.

We wish the loving couple the best for their future and hope that the W Series competitor reaches new heights in her career.