The racing community has always been more lenient towards men than it has been towards women. However, Finnish racing driver Emma Kimilainen has been a strong advocate against sexism in the industry.

The W-Series racer has a professional career spanning almost two decades. The years she spent as a racing driver has been filled with ups and downs. So, let us know more about the female racing driver Emma Elina Kimilainen.

Emma Elina Kimilainen was born in Helsinki, Finland, on the 8th of July, 1989. The racer's father, Hannu Kimilainen, was a motorsport enthusiast, and he would constantly take young Emma out to races. Although the racing driver looks pretty close to her mother, she is unknown to the media. 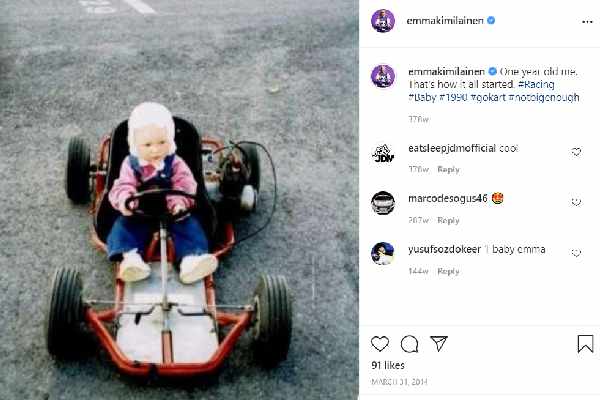 Emma Kimilainen learned how to drive a kart when she was just three years old. Image Source: Emma's Instagram.

Emma Kimilainen is one of three children. Although she has never publicly mentioned their names, the racer has acknowledged that she has an elder brother and a younger sister. The trio seems to have a solid bond between one another and very supportive of each other's life and ambitions.

In an interview with Anna, Emma Kimilainen stated that she was very boyish in nature as a child. So much that everyone who knew her called her and her elder brother "brothers". The confidence she has had since she was a child certainly shows in her extrovert nature. Unfortunately, not much is known about her early education and schooling.

Like many professional racers, Emma Emily Kimilainen started pretty young. In fact, the racer was introduced to karting by her father when she was just one year old. And thus, by the time she was three, she was karting, and by the age of five, the young racing driver was already competing in karts.

Let us know about the career of the multiple-time winner of The Racing Driver of the Year in Finland.

The Beginnings Of Her Professional Racing Career

The Finnish racing driver began her career as a professional racer in 2005 with her participation in the Formula Ford Championship. She competed in 3 versions of the series: Northern European, Finland, and Sweden. Emma was able to finish second in the Finnish category. In the 2006 season of the same championship, the racer finished second in both the Finnish and Northern European categories.

Emma continued to race in smaller formulas, but she always had her eyes on participating in the Formula 1 races. In one of the campaigns to reach her ambition, the racer was noticed by Audi. That let her experience in the Formula Masters. Unfortunately, Audi withdrew, citing the global recession of 2008.

Despite having troubles, the racer was able to secure enough funding to participate in the Formula Palmer Audi in 2009. Emma Kimilainen had four podium finishes and finished fifth overall. Sadly, this would be the final race of her career for the next four years as she had to take a long hiatus due to a lack of funds.

In 2009/10, Emma Elina Kimilainen had been struggling to manage her finances. Participating in various races requires sponsors as monetary backing, and the racer had been having a hard time striking a deal. During a talk with the Shikaani Formula 1 Podcast, the racing driver revealed that she had decided to take a break from racing because of a sexist, absurd, and incorrect proposal.

Due to her desperate times, Emma Elina Kimilainen had been looking into joining a team. The motorsport enthusiast had been trying to enter the Indy Lights series. However, the series had been sponsored by a namely men's magazine. And they asked her to pose topless for the magazine.

In 2014, not long after the birth of her daughter, Emma Kimilainen was offered a contract by PWR Racing Team to compete in Scandinavian Tour Car Championship. Although she was very out of practice, the racer made a comeback after intense training. The racer even had to work with a mental coach and a therapist to get her ready to race on tracks.

This helped her out a lot but it took her almost three years to get back where she left. Despite the challenges, she became the first woman to compete in the series.

The racing driver managed to land the 11th position in the 2014 season and improved to the 7th position after making a comeback during the 2015 season. Although she did return for a third season in 2016, Emma Kimilainen was involved in a gruesome accident that injured her neck. As a result, the racer had to leave the season mid-way.

After taking another hiatus to recover from her accident, Emma was determined to make another return. She planned to participate in the 2018 Electric GT Championship, which was ultimately canceled.

W-Series is a Europe-based women-only racing championship. Finnish racing driver Emma Kimilainen was selected to race in the 2019 season. But, unfortunately, due to an accident that aggravated her neck injury during the opening race, the racer had to sit out of multiple rounds. However, Emma was able to make a comeback and finished 5th in the series.

The 5th placement in the 2019 series meant that Emma Elina was directly selected for the 2020 series. She competed against her old rivals Alice Powell, Marta Garcia, and Jessica Hawkins alongside newbies like Abbie Eaton and Belen Garcia.

Career As A TV Commentator And Radio Host

During her off-time from racing, Emma Kimilainen landed a job as a host on one of the biggest commercial radio channels in Finland. On Radio Nova, she did a show that was four hours long, three days a week. Moreover, the racer also became a Formula 1 commentator for the Finnish F1 team on the Finnish MTV.

In addition to that, Emma Kimilainen showed her love and passion for food by participating in the 2015 edition of Finnish Masterchef VIP. She was a strong contender against Laila Snellman, Anni Hautala, and Kim Herold. Although Emma did not win the series, Kaisa Liski did; she managed to leave quite an impression with her bold attitude.

Career As An Author

Emma Kimilainen put her expertise in driving to use and wrote a book on it. The book is called Naisen Autoiluopas and consists of guides for women looking to own and maintain a car.

The book was published in Finnish only, but there were talks of translating it to other languages. However, it is unsure about the number of sales the book has made to date.

During her hiatus from racing, Finnish racing driver Emma Elina completed her undergraduate degree in business administration and got a real job in the field. The racer worked as a full-time sales manager in a big Finnish security company.

According to an interview, the racer had to manage big-name clients and manage an enormous budget. She learned a lot during her time as a sales manager.

Emma Kimilainen Net Worth And Earnings

Although Emma Kimilainen has had a long career, she has been reticent about her finances and lifestyle. The racer has preferred to keep her private life away from the eyes of the public.

However, with her many brand deals and team alliances, the talented driver is sure to make a good income from her career as a motorsport enthusiast. And one can expect Emma Elina Kimilainen's net worth to be of a grand sum. Moreover, during her days as a sales manager, the racer could have easily made over $100,000 yearly, according to Salary.com.

In addition to racing, Emma also has written a book and was a host in a radio show. Although the sales of the book are unknown, it must bring in quite the money for Emma. And a radio host can make around $58k a year. With her various income sources and races, Emma Kimilainen is certain to live a comfortable life with her family.

Emma Kimilainen Is Married And A Mother

During her four-year hiatus from racing, Emma Elina Kimilainen had a lot of time to herself. However, the racing driver took the time to complete her studies and pursue work in her field of interest. Although when and how she met her future husband is unknown, it seems as though the couple met while the racer was either pursuing her degree or working as a sales manager.

The gorgeous racer, Emma Elina Kimilainen's husband Timo, has been working in the business field for many years. Moreover, Emma Kimilainen's beau is an Account Manager at the Bauer Media Group. The racing driver has quoted that her husband is a charming man who is very supportive of her career.

The married couple has a lovely daughter who was born in 2013. The young girl is named Fanni Liuski and has been the light of the racer's life. Emma Kimilainen has credited Fanni for teaching her to become a more patient person. And, thus, due to her newfound patience, the racer said that she has been able to perform better on tracks.

Emma Kimilainen and her husband have made it their top priority to ensure their kid is raised in total privacy. The racer constantly hides the face of her child whenever she shares pictures of her on the internet.

Emma Kimilainen is very private about her family and rarely shares anything about them on social media. Photo Source: Emma's Instagram.

The lovebirds seem to prefer to have their private life kept under wraps. Emma Elina never posts pictures with her husband. However, there is no doubt that the couple is very happy together and enjoys a blissful married life with their daughter.