Charlie McAvoy has been playing ice hockey since he was a young child. He has helped team USA win multiple medals in international tournaments. Photo Source: Charlie's Twitter.

Charlie McAvoy is one of the most famous hockey players in the USA. He is a part of the coveted team Boston Bruins and has played in the National Hockey League for several seasons.

Charlie has been a fan of hockey since he was a young boy and started pretty young. The sportsman started skating when he was only three years old. So, how did Charlie McAvoy become one of the most recognized players in the NHL? Let's find out today in this article.

Charles Patrick McAvoy Jr. was born to parents Charles McAvoy Sr. and Jennifer McAvoy on the 21st of December, 1997. Born in Long Beach, New York, Charlie's entire family was a huge ice hockey fan. The McAvoy family were the supporters of the New York Rangers.

Charlie grew up with three siblings, all sisters. The athlete has an elder sister Kayla McAvoy and two younger sisters named Holly McAvoy and Heather McAvoy. The sportsman is incredibly loved and supported by his entire family. They even come to his games to cheer him and watch him kill it on ice. 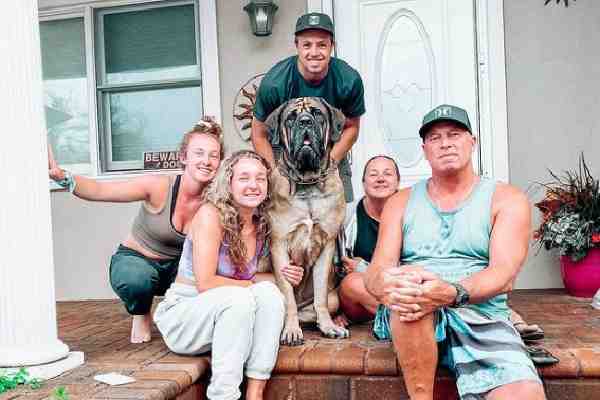 Charlie McAvoy's entire family is a big ice hockey fan and they support him to the best of their abilities. Photo Source: Charlie's Instagram.

Charles Sr. is the fourth generation owner of Charles A. McAvoy Plumbing & Heating in Long Beach. He got a contract to install a studio rink at the Long Beach Arena sometime around 2000. After the installation. Charles Sr. took Charles Jr. out on the rink when he was only three years old. This experience only deepened Charlie's love for ice, and he went on to become a hockey player.

Even as a Long Beach High School student, Charles was incredibly passionate about ice hockey. However, as he was selected into the USA Hockey Developmental team, he transferred to Pioneer High School in Michigan.

The passion for ice hockey was still raging inside the Boston Bruins defenseman when he joined the Boston University Ice Hockey team. Fellow NHL star, Jack Eichel is also a BU alumnus.

Although McAvoy is yet to open up about his degree, everyone knows that his talent shone in the ice rink. It was his excellent play for Boston University that pushed his selection into Boston Bruins.

Charlie McAvoy started playing ice hockey competitively when he was barely a teenager. As a fan of New York Ranger, it must have been surreal for the young man when he got to play in the Quebec International Pee-Wee Hockey Tournament in the New York Ranger's minor ice hockey team in 2010. From there on, it was an upward hill for the player.

In 2013, McAvoy committed to play for the ice hockey team of Boston University. Moreover, he was selected in the US Hockey National Development Program. As a part of the national team, Charlie got to play several international games. The ice hockey player participated in the IIHF World U-18 championship in 2015 and helped his team win gold. 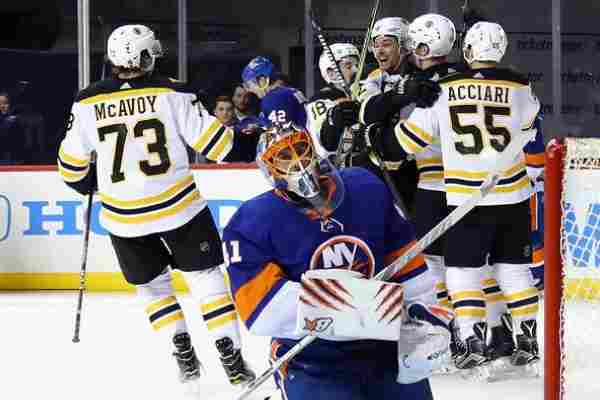 Year after year, Charlie helped bring in several international medals for the teams. Moreover, he won the Player of the Game award in the final game of the 2017 World Junior Ice Hockey Championships when Team USA won gold. In the following year, the USA won the bronze medal in the IIHF Ice Hockey World Championships.

Even when Charlie played hockey on a college level, he received a lot of attention from the media. His exceptional play resulted in him receiving compliments from many aficionados of the industry. As a result, when he was trying out to get drafted into the NHL, the hockey player was in the books of several scouts. Moreover, the sportsman was regarded as one of the top four defensemen trying out that season.

The first team that signed Charlie McAvoy was the Providence Bruins of AHL. Despite his lack of experience playing in the professional arena, he was praised for being NHL level, and several veteran players complimented him. McAvoy played several games for the Bruins and led them to victory in several games.

The New York native was then called on to play for the NHL team, Boston Bruins, and signed an entry-level contract with them. Charlie made his regular-season debut in 2017 against Nashville Predators and even scored a goal in the game.

Because of his exceptional play for the team, the Bruins offered a $14.7 million contract to Charlie McAvoy. The contract was signed on the 15th of September, 2019, and is valid for three years.

Since then, Charlie McAvoy has proved that he is an excellent player and deserves his place in the NHL. Fans have well received his plays for Boston Bruins. Moreover, the young athlete is anticipated to go a long way in his career.

Playing any sport is a surefire way to cause one health complication or the other. Unfortunately, even Charlie McAvoy has been the victim of a few health problems.

In early January of 2018, Charlie McAvoy was diagnosed with supraventricular tachycardia. The condition causes the heart rhythm to go faster. As a result, the athlete went through the ablation procedure before returning to the ice in February.

Ice hockey could be a dangerous and aggressive sport sometimes. In the 2018-2019 season of the NHL, Charlie was unfortunate enough to get a concussion. Sadly, he was placed on the injured reserve and would have difficulty playing in the games to come.

Nevertheless, Charlie continued to work hard and came back full force to play for his team.

As a long-time fan of ice hockey, it did not take long for Charles to gain fame and recognition with his playing. Moreover, because his teams have won several medals due to his participation, the player has, undoubtedly, been paid a reasonable sum of money because of the wins. As a result, Charlie McAvoy's net worth is thought to be of a substantial amount.

According to a report published on Statista, an average player in the National Hockey League earned between $1.54 million and $3.32 million depending on their team. The jaw-dropping numbers are way higher than the average pay of a sportsperson in the USA.

In the same report, it was revealed that the average earnings of a Boston Bruins player is $2.38 million. As Charlie McAvoy is one of their star athletes, his salary could be way more than the average.

In the past several seasons of NHL that Charlie McAvoy has played, his salary has been seen to rise exponentially. Here is a list of estimated earnings of Charles since 2016.

Along with the annual salary, Charlie McAvoy also received signing bonuses and many other monetary bonuses. As a result, his total earnings can go upwards of several million dollars each year.

Moreover, due to his fame as an ice hockey player, Charlie McAvoy has also had the honor of having his own menu item at Chipotle. The "Charlie McAvoy Bowl" was a rice bowl that appeared on Chipotle's online menu in honor of hockey week in the USA and Canada. 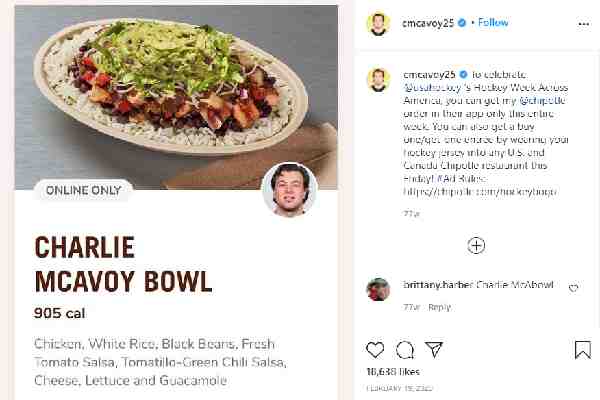 As Charlie McAvoy still has a long way to go in his hockey career, his fame and wealth will inevitably be on the rise. Furthermore, as he is a talented player, many NHL teams are willing to pay him millions of dollars to trade him.

Of course, only time can tell where the American ice hockey player reaches, but we surely hope that his potential can be seen by all. Also, with his increasing demand and popularity, we can expect, Charlie McAvoy's net worth reaching new heights in the upcoming days.

Is Charlie McAvoy In A Relationship?

Well, the short answer to the popular question "Is Charlie McAvoy in a relationship?" would be yes. Charlie McAvoy has been dating Kiley Sullivan since at least 2016.

Charlie McAvoy's girlfriend, Kiley, is a gorgeous young woman. She loves to travel a lot and sometimes posts it on her social media profile. However, unfortunately, the lovely couple has not opened up about how they met and their love story. Despite some screen of privacy around their relationship, it is clear that the loved-up duo loves to show each other off on the internet. 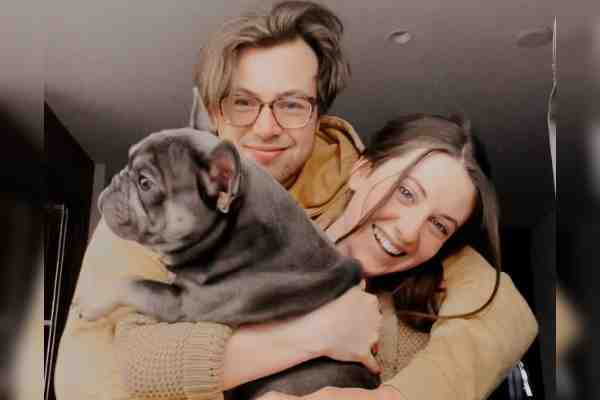 Every person who plays sport wishes for a partner to be with them through it all and being their cheerleader. Charlie McAvoy's girl is exactly what one wants. Kiley is present in almost all the games her boyfriend plays, and cheers for him and his team. People can easily spot her in a Boston Bruins game as she's wearing a jersey with his name on it.

The loving pair is serious about one another and often spends time with each other's families during the holidays. We're confident that Kiley and Charlie McAvoy's love will only grow in the years to come.

Moreover, we hope Charlie and Kiley continue to live a happy life and even welcome a child or two in the coming days.