A standout athlete who was noted for his aggressive style of play even in high school, Dylan Larkin is an American professional ice hockey player. He currently plays for the Detroit Red Wings in the National Hockey League.

The sportsperson was selected Freshman of the Year during his time with the Michigan Wolverines. Hence, let's read more about this rising hockey star's professional and personal life in a little more depth.

Grew Up In A Supportive And Happy Family

Dylan, the young ice hockey player from Waterford, Michigan, USA was born on July 30, 1996. Dylan Larkin's parents are Kevin Larkin and Sidney Denise Larkin. The athlete's father is from Toronto and was also a sports enthusiast. He played Junior A hockey in Canada. For their Michigan-born children, the Larkin family undoubtedly brought a hockey heritage with them.

Dylan grew up in his hometown with his older brother, Colin Larkin who also plays hockey. In addition, Ryan Larkin and Adam Larkin, Dylan's two cousins, are also pursuing hockey careers. Moreover, the American player keeps posting photos with his family members showing his gratitude to them. 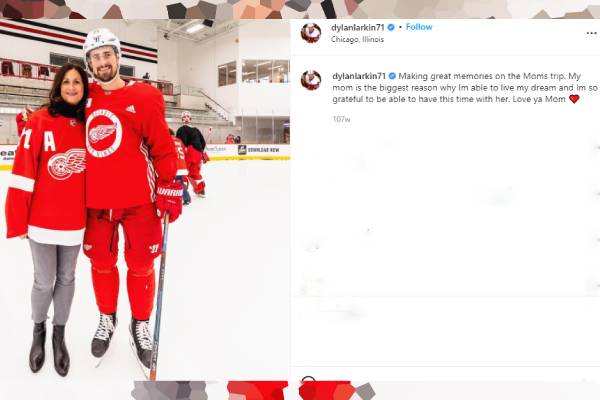 The young player attended Waterford Mott High School and Ann Arbor Pioneer High School for his education. Dylan then enrolled at the University of Michigan for his college education.

When asked about Dylan's youth hockey experiences, Kevin stated that the state and national championships won with Detroit Belle Tire had prepared him for a tougher challenge. Well, the Michigan native has a proud and supportive dad by his side.

As previously mentioned, Dylan Larkin is a professional ice hockey player who now serves as the Detroit Red Wings' captain. Dylan has set various rookie records and won numerous honors since turning professional. He was also chosen to the All-Freshman Team, the All-Big Ten First Team, and the Second Team All-American.

The American player began his sophomore season at the University of Michigan after graduating from high school. During the 2014-15 season, he was a member of the Michigan Wolverines. Dylan was selected National Rookie of the Month by the Hockey Commissioners' Association in January. Not to mention, Larkin was the top freshman in college hockey in his freshman year.

In a 10-6 win over Ohio State, Dylan set a new career-high with five points. He also became the first Michigan freshman since October 1997 to score five points in a game. Similarly, the emerging player was selected the Big Ten First Star of the Week that season after scoring a goal and assisting on 12 shots on goal.

The hockey player signed a three-year, entry-level deal with the Detroit Red Wings on May 21, 2015, following a strong college career with the Michigan Wolverines. Following an amateur trial, he was assigned to the Grand Rapids Griffins, the Red Wings' American Hockey League club. Hence we believe, the trade must have helped in the growth of  Dylan Larkin's net worth.

Larkin made more history in October when he was named to the final roster for the 2015-16 season, becoming the first 19-year-old to make his NHL debut since Mike Sillinger in 1990-91.

In his debut season, the Michigan graduate scored 23 goals and added 22 assists in 80 games, making him the franchise's sixth rookie to lead the team in goals. No wonder, all these records, and recognition contributed to the player's fortune.

Similarly, the 6 feet 1-inch tall player had signed with the Detroit Red Wings with the contract length of 3 years for $4.2 million in 2015. In 2018, the hockey star renewed the contract of five years worth $30.5 million. And, based on his career, we expect Dylan Larkin's net worth and earnings to continue to rise.

For the records, Dylan started his professional hockey career with the 2015 - 2016 season earning total cash of $925K. However, today after having been played for seven seasons his overall fortune is estimated to be $28 million.

We anticipate him playing for many more seasons and winning more titles, simultaneously earning more fortune.

Is Dylan Larkin Dating Someone?

Dylan's fans have grown in number, given that he is a great ice hockey player for the Detroit Red Wings. Not to add that they were equally interested in his personal and professional lives.

Hence giving a rest to the talented player's fans' curiosity, based on his Instagram photos, he appears to be dating someone. As per sources, Dylan Larkin's girlfriend's name is Kenzy Wolfe.

When it comes to their love life, Dylan and Kenzy are usually silent. According to their social media posts and public appearances, the pair appear to be very protective of their relationship. As a result, most information about their relationship, including when the lovebirds first started dating, remains a mystery to the general public. 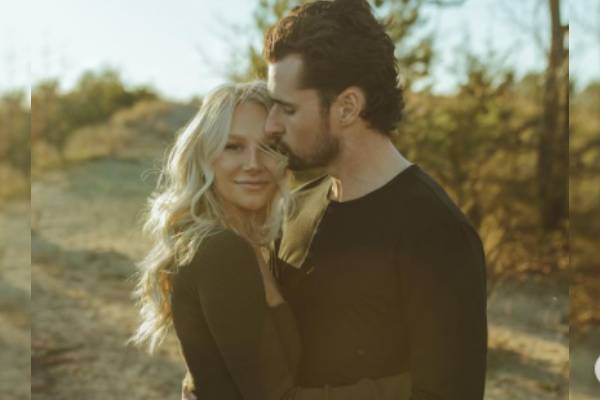 Dylan Larkin is in a relationship with his girlfriend, Kenzy Wolfe. Image Source: Dylan's Instagram.

However, the attractive couple, Dylan Larkin and Kenzy Wolfe have confirmed their love by posting multiple images on their individual Instagram accounts. Their social media posts show how much they adore each other and how grateful they are to have each other in their lives.

Apparently, Dylan Larkin was dating Caitlin Reilly, the sister of Minnesota Wild defenseman Mike Reilly. Just like Dylan himself, she is also a successful hockey player who represented the University of Minnesota and plays in numerous hockey tournaments for various clubs.

According to reports, the former couple was dating in 2017. The ex-pair were spotted having fun in one other's company at a number of public gatherings. The former lovebirds' bonding, however, did not last long, and they broke up without the media being aware of it.

Anyways, as of now the sportsperson is preoccupied with setting records and focused on his ice hockey career.