Auston Matthews is an American professional ice hockey player who plays for the Toronto Maple Leafs in the NHL. Photo Source: Auston's Instagram.

Since making his debut in the professional league at the age of 15, Auston had established himself as a prominent figure in ice hockey, winning many of the prestigious titles across the globe. Playing as a center and alternate captain for the Toronto Maple Leaf, Auston has become one of the NHL's most successful and wealthiest players.

The sports celebrity Matthews hails from a family of athletes. His father, Brian Matthews, originally from California, was an athletic student during his college days. Similarly, Auston's uncle, Wes Matthews, played in the National Football League for the Miami Dolphins for a short period.

Besides, Auston's mother, Ema Matthews, is a sports fanatic and regularly attends her son's matches to cheer him on. In addition, the dark-haired player has two sisters: Alexandria Matthews and Breyana Matthews. His older sister, Alexandria, is a professional golfer on the LPGA (Ladies Professional Golf Association), while his younger sister, Breyana, is a casual golf player.

When Auston was two years old, his father took him to watch the local ice hockey team, the Arizona Coyotes, play. Initially, Auston did not have much interest in the sport itself; instead, he was attracted to the Zamboni machine that is used to clean the ice during intermissions. 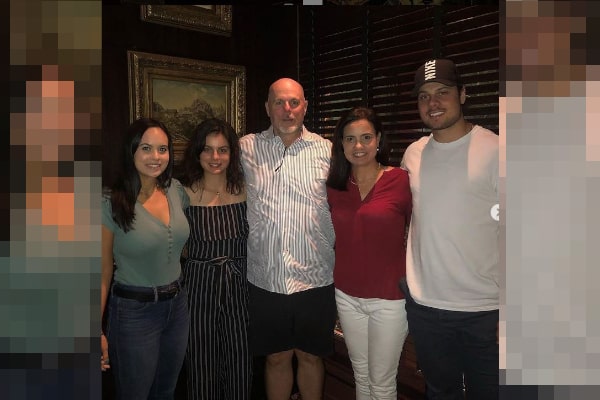 However, Auston expressed his desire to play ice hockey after his fifth birthday. Consequently, he enrolled in the Arizona Bobcats minor hockey program. On 16th January 2006, the young Auston attended a game between the Coyotes and the Washington Capitals, where he got to see the legendary goal of Alexander Ovechkin, which was later termed as 'The Goal. '

During his youth, Auston played both hockey and baseball. In one of the interviews, his father, Brian, mentioned that baseball was his first sport. Auston's hand-eye coordination made him an excellent hitter of the ball. Nevertheless, he chose to pursue a career in hockey as he didn't like the slow pace of baseball.

The American athlete Auston began his professional career at 13 when he played in the 2010 Quebec International Pee-Wee Hockey Tournament with the minor ice hockey team. At the time, the young player was being coached by Boris Dorozhenko, a Ukrainian-born hockey coach.

Since making a debut in the professional hockey game, Auston has achieved numerous awards, winning multiple prestigious tournaments across the globe. As a result, he established himself as one of the most promising ice hockey players in the US.

In 2012, Auston was selected 57th overall by the Everett Silvertips of the Western Hockey League (WHL). But, on the contrary, the athlete chose to play for the USA Hockey National Team Development Program, as the team confirmed his participation in the United States Hockey League (USHL).

During his first season with the team, Auston's unique playstyle combined with overall offensive and defensive gameplay attracted many high-profile personalities and experts. Concurrently, he drew interest from NHL (National Hockey League) scouts and was even featured on the official NHL website.

The young competitor further proved his excellence on the field in his second season. Auston finished as the league's top scorer with 116 points (55 goals and 61 assists), breaking the National Team Development Program record points set by Patrick Kane of the Chicago Blackhawks in the 2005–06 season

Auston's continued dominance in the league earned him the Bob Johnson Award on 21st May 2015. In addition, he was enlisted as the most valuable player at the 2015 World U18 Championship.

Afterward, Auston was selected first overall in the 2016 NHL Entry Draft by the Toronto Maple Leafs, where he has been ever since.

Auston has represented the United States in many elite ice hockey competitions worldwide, and his outstanding play and unrivaled skill have helped them win multiple competitions.

Matthews helped the United States men's national under-18 ice hockey team win gold at the 2014 IIHF World U18 Championship during his junior years. He repeated the feat the following year, finishing as the event's top scorer and MVP. Similarly, he secured a bronze medal for the team US in the IIHF World U20 Champions.

Auston Matthews Net Worth And Earnings

Being one of the most promising and top-notch players in ice hockey, Auston attracts attention from the media and public alike. Moreover, with numerous achievements and victories under his belt, he often flaunts a lavish lifestyle on his social media. As such, people can't help but wonder about all the fortunes he has amassed over the years.

Earnings As A Professional Player

As the American competitor played ice hockey since his youth days, Auston Matthews' net worth primarily consists of his earnings as a professional hockey player.

Auston is one of the world's wealthiest hockey players. Throughout his career, he has represented numerous teams and assisted them with multiple victories. As a result, he is one of the most valuable players, with clubs willing to pay millions of dollars to sign him.

During Auston's initial signing with the Toronto Maple Leafs, his contract was valued at $3.775 million annually, including all bonuses. Furthermore, on 5th February 2019, he signed a new five-year contract with the club worth a monstrous $58.17 million.

Some of Auston Matthews' seasonal earnings during his time with Toronto Maple Leafs are listed below:

Thanks to his astronomical earnings, Auston Matthews' net worth has grown over the years. He is also ranked first on Forbes' list of the NHL's highest-paid players in 2021.

Earnings From Brand Endorsement And Collaboration

Aside from his professional career, Auston generates a hefty sum of money through various brand deals and collaborations. The dark-haired athlete has signed contracts with many famous brands, like Scotiabank, Bauer, Upper Deck, Verizon, CCM Hockey, etc. According to Forbes, his revenue from multiple brand deals is valued at $3 million. 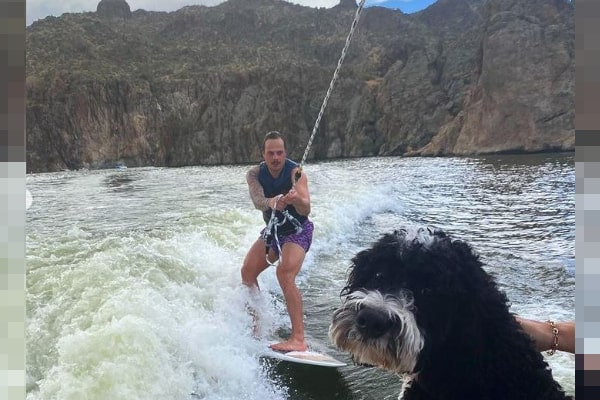 Auston Matthews can afford a lavish lifestyle, thanks to his income as an NHL player. Photo Source: Auston's Instagram.

Additionally, in April 2021, Auston published his first NFT collection through collaboration with OpenSea. As reported by thestar.com, he was able to generate over $200K on the first day of release. As of August 2021, his NFT collection is priced at $5,966. Therefore, the hockey star must have generated huge additional assets through the sale of his NFTs.

Although the sports personality has not spoken about his wealth in public, we can easily infer that Auston Matthews' net worth is significantly large, thanks to his earnings from multiple sources.

Who Is Auston Matthews' Girlfriend?

With so much success, Auston has become the talk of the town for many ice hockey enthusiasts and professionals. However, although everyone is well informed about his achievements and feats, only a few know about the dating life of this sports figure.

The American athlete is infamous for keeping his love life secret. Previously, he had been linked romantically on a couple of occasions. In the early days of Auston's career, fans speculated that the Toronto player was dating Emily Ruttledge. They are both natives of Arizona and were believed to be close friends before starting a relationship.

Furthermore, there were rumors that the dashing hunk was exchanging love messages with Arizonian model and actor Jordyn Johnson. Auston Matthews' then-girlfriend, Jordyn shared numerous pictures of the couple together in 2017. However, they are no longer together and have moved on with their respective lives. 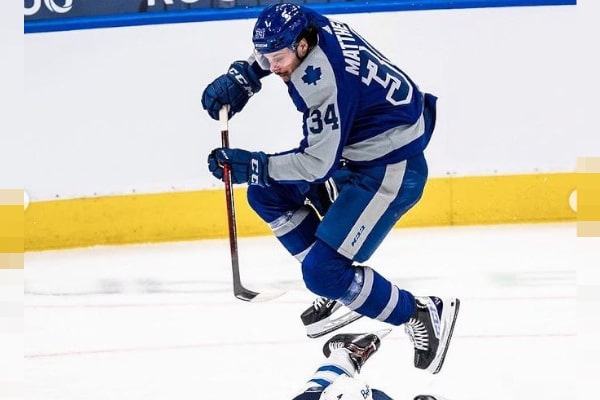 Auston Matthews has little to no time for romance in his life, as he leads a hectic lifestyle. Photo Source: Auston's Instagram.

There is a lot of haze surrounding Auston Matthews' girlfriends and past dating experiences. However, as of 2021, he seems to be single and devoted to his career.

So, is Auston single or not? We are not sure, but we are confident that he is living his dreams while competing at the highest level of ice hockey.