Over the years, Buffalo Sabers captain Jack Eichel has captivated millions of fans worldwide with his incredible performance inside the rink. Photo Source: Wikimedia Commons.

The American professional ice hockey center and captain of the Buffalo Sabres, Jack Eichel, has repeatedly shown his supremacy inside the rink. With his tremendous performance and control over the puck, he has helped his team to numerous victories over the years.

Nicknamed the "Eichel Tower" for his dominating presence, Jack was described as the new face of American hockey when he was just 17 years old. Consequently, he has won numerous awards and captivated millions of fans worldwide.

After being drafted second in the 2015 NHL Entry Draft, his fame shot up overnight. Today, let us take a look at Jack Eichel's biography and a glance at the personal life of this NHL's top prospect.

Jack Eichel was born in North Chelmsford, Massachusetts, on 28th October 1996. His father, Bob Eichel, is a supply company manager, and his mother, Anne Eichel, works as a nurse. Furthermore, Jack is the youngest in the family and has an older sister named Jessie Eichel.

Jack was first introduced to hockey by his father when he was just four years old. The young competitor immediately fell in love with the game. 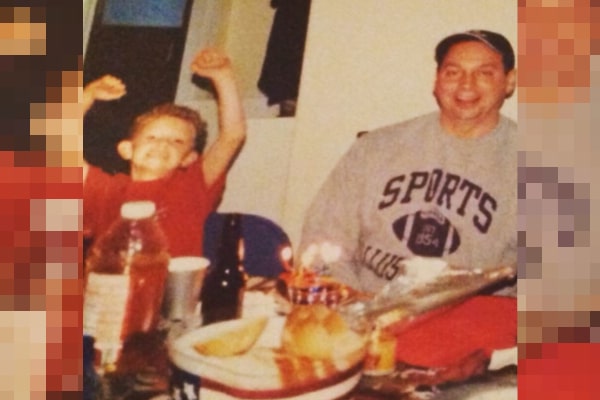 Jack Eichel was first introduced to the rules of ice hockey by his father, Bob Eichel. Photo Source: Jack's Instagram.

However, at the time, Massachusetts only allowed children over the age of five to join its league. So Jack Eichel's parents signed him up for ice hockey lessons in New Hampshire, where he spent over a year learning the basics.

When Jack turned six, he informed his father that he wanted to play in the NHL and planned to skip high school to play for the Boston Junior Bruins. He had already mapped out everything by the time he was eight.

Jack has been extremely laborious since he was a teenager. The young athlete would work out regularly after school hours and even go skating during the summer. In addition, his childhood best friend, Danny Ferri, mentioned that Eichel was the harshest critic of his own plays. "Although Jack was aware of his talent, he worked harder than anyone," Danny continued.

In various interviews, Jack Eichel's mom and dad stated that he would frequently spend numerous hours practicing and refining his skills inside the rink.

Jack Eichel's career began when he played for the USA Hockey National Team Development Program team for two years during the 2012-2013 and 2013-2014 seasons. Many professionals praised his brilliant performance on the ice. Consequently, he was listed on the United States Hockey League Second All-Star Team.

Later on, Jack signed a letter of intent to commit to Boston University of Hockey East on 29th April 2014. During his first year at the university, he became the only second freshman to win the Hobey Baker Award. The first athlete to achieve the feat was Paul Kariya in 1993.

In 40 games with Boston University, Eichel led the nation in scoring with 26 goals, 45 assists, and 71 points. In addition, he won multiple awards, like Player of the Year, Rookie of the Year, Hockey East scoring champion, and MVP of the conference tournament.

The American athlete Jack Eichel initially rose to the limelight when he was selected second overall by the Buffalo Sabres in the 2015 NHL Entry Draft. Nevertheless, it is highly speculated that he would have been chosen first if not for Connor McDavid, who is widely regarded as the best player of his generation.

Let's watch a short interview with Jack Eichel after the Sabres picked him second overall in the 2015 NHL Entry Draft.

Jack further proved his dominance on the ice after scoring his first NHL goal in his debut game against the Ottawa Senators. Well, Jack concluded his debut season with 24 goals and 56 points in 81 games, ranking first on the Sabres in goals and second in points only to Ryan O'Reilly.

Climbing Up The Ranks

The Buffalo Sabres signed Eichel to an eight-year contract extension on 3rd October 2017 that was worth $80 million. In the same season, Jack scored his first NHL hat trick against the Carolina Hurricanes. Sadly, despite his incredible performance, the Sabres lost the match.

On 3rd October 2017, Jack changed his jersey number from 15 to 9, which he wore at Boston University. Additionally, he became the sole representative of the Sabres for the 2018 NHL All-Star game. It was also the first NHL All-Star game of Jack Eichel's career.

Jack's consistent dominance inside the rink, combined with impressive records to back up his skills, earned him international recognition. As such, he was appointed as the captain of the Buffalo Sabres in October 2018.

Jack has since accomplished several milestones, including his 100 career goals and 300 career points. Likewise, he became the first player in Sabres history to score a penalty shot goal in overtime.

The Sabres superstar Jack Eichel's career has not been as smooth as it looks. He has shared his fair share of injuries and had to abandon his team for countless games.

On 12th October 2016, Eichel suffered a severe high ankle sprain to his left ankle during a practice session. Following the injury, he could not compete for the United States at the World Ice Hockey Championships.

Previously, Jack has represented his country on six occasions, winning a gold and silver medal each and two bronze medals with his team. 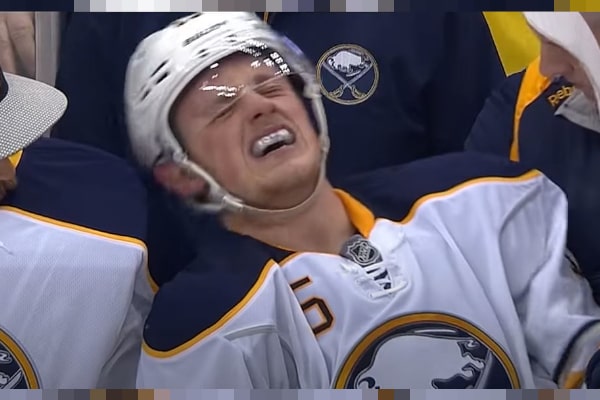 Furthermore, in February 2018, Jack sprained his right ankle during a game against the Boston Bruins. He was checked from behind by the Bruin's defenseman Matt Grzelcyk and fell awkwardly into the boards.

The former Sabres' head coach, Phil Housley, then ruled Jack out for six weeks. Later, Eichel returned to assist the Sabres to defeat the Chicago Blackhawks for the first time since 2009.

On 14th April 2021, it was announced that Eichel's season would end abruptly to recover from the surgery required to repair a herniated disc in his neck. However, the Sabres were reluctant about him having the surgery. Subsequently, the athlete showed dissatisfaction with the team about handling the situation and even hinted at him leaving the organization.

Following Eichel's comment, it is highly likely that he will be traded and won't play for the Buffalo Sabres in upcoming seasons. Additionally, his agent tweeted out a statement requesting a trade for his client in July of 2021.

Jack Eichel Net Worth And Earnings

Being a top second prospect in the 2015 NHL Draft, Jack Eichel has gathered fortune worth millions of dollars from his professional career. His wealth primarily consists of earnings from playing ice hockey and various lucrative brand deals.

As reported by Celebrity Net Worth, Jack Eichel's net worth is valued at $30 million. With so many years remaining in his NHL career, his revenue is only going to increase in the coming days.

Earnings As An Athlete

Aforementioned, Jack signed a three-year entry-level contract with the Buffalo Sabres before beginning his NHL career. According to Spotrac, he was paid around $800K for each season, along with singing bonuses and incentives.

Additionally, Jack renewed his contract with the Buffalo Sabres and signed an eight-year deal in 2017, valued at a monstrous $80 million. He was awarded a $10 million annual salary from the start of the 2018-19 season.

Here's a detailed list of Jack Eichel's estimated career earnings during his time with the Sabres:

Undoubtedly, Jack has amassed big bucks in his professional career. However, on 10th March 2019, he was suspended for two games for illegal checking to the head of Carl Söderberg of the Colorado Avalanche.

Moreover, Eichel was fined $107,526.88 under the Collective Bargaining Agreement rules, based on his average yearly wage due to the suspension. The Sabres donated the fund to the Players' Emergency Assistance Fund.

Despite these fines, the seven figures paycheck he pockets every year from his NHL career has made Jack Eichel a multi-millionaire.

Earnings From Brand Endorsements And Collaboration

Aside from his professional career, Jack has collected a decent sum of money from multiple brand deals and collaborations.

On 13th August 2015, Eichel signed a sponsorship deal with Bauer Hockey. Although the details of the agreement were not disclosed, he must have generated a modest income from the partnership. Besides, he has also endorsed popular brands like Tim Hortons, and sports drink BodyArmor. Therefore, he must have been paid handsomely by these brands.

Similarly, Jack collaborated with Leaf Trading Cards in 2015 to produce the largest rookie autograph deal in ice hockey. Moreover, he released his collection of NFTs with OpenSea. The single piece of NFT is priced at $1,593.71. 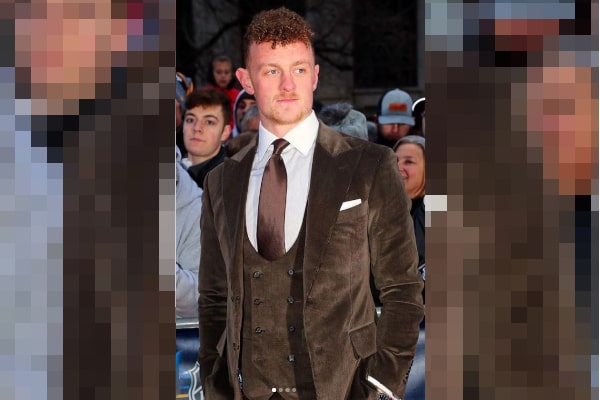 Jack Eichel's net worth of $30 million comprises of his career earnings as an ice hockey player and endorsement deals. Photo Source: Jack's Instagram.

Thus, the sales of these NFTs are bound to increase Jack Eichel's net worth by a couple of thousand dollars. And with a massive wealth to his name, the pro ice hockey player enjoys a lavish lifestyle.

Who Is Jack Eichel's Girlfriend?

The American professional player Jack Eichel has mesmerized millions of people with his brilliant plays inside the rink. Time and again, he has been praised by NHL colleagues and enthusiasts alike for his outstanding performance.

With his fame skyrocketing every other day, fans across the globe are eager to find out about Jack Eichel's girlfriend and dating life. So stick with us if you are one of them, as we briefly look into this dashing sports personality's love life.

In A Long Term Relationship

Jack is in a committed relationship with his partner Erin Basil, a graduate of Northeastern University. Although the precise time they began dating is unknown, the couple has been romantically linked since early 2015.

In addition, fans have spotted Jack Eichel's girlfriend, Erin, inside the stadium, cheering for him and his team. 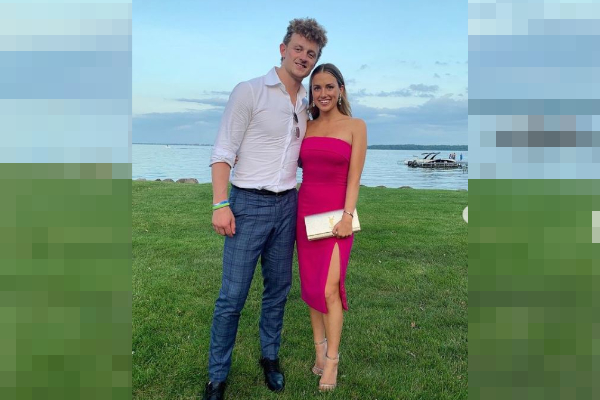 Jack Eichel is in a long-term relationship with his girlfriend, Erin Basil. Photo Source: Erin's Instagram.

Even though Jack's social media is devoid of any pictures showcasing his love life, his dating partner's Instagram is brimming with the couple's sizzling images. Moreover, the pair has been seen acting lovey-dovey in numerous tourist destinations. It is praiseworthy how the duo have managed to keep their love life ongoing despite Eichel's hectic lifestyle and demanding schedule.

We wish Jack and his sweetheart, Erin, a healthy relationship and indeed expect to get a closer look at the pair's dating life.