Brock Michael Boeser, better known as Brock Boeser, is an American ice hockey player who currently plays as a right-wing for the NHL team Vancouver Canucks.

Over the years, Brock has captivated millions of ice hockey fans around the world with his brilliance and mesmerizing plays inside the rink. Furthermore, despite suffering from multiple injuries and hardships since his youth days, the athlete has emerged stronger on every occasion.

Today, let us look at Brock Boeser's biography and get a glimpse into the personal life of a top NHL prospect who shines in the face of adversity.

On 25th February 1997, Brock was born Brock Michael Boeser in Burnsville, Minnesota. He is the youngest of Duke Boeser and Laurie Boeser's three children.

The young athlete spent most of his childhood in Burnsville, growing up with his half-brother Paul Matthews and sister Jessica Boeser.

Brock was athletic since his youth days and played a number of sports, including baseball and hockey. However, hockey ultimately piqued his interest. During his school days at Burnsville High School, Brock used to play ice hockey competitively. He quickly realized he was pretty good at it and decided to pursue it as a career.

Later on, Brock's incredible performance inside the rink, combined with his offensive and defensive strength, attracted the attention of many national scouts. Consequently, he was selected first overall by the Sioux City Musketeers of the United States Hockey League (USHL).

Brock made his USHL debut with the team when he was just 15 years old.

Hardships As A Teenager

The sportsperson endured many hardships and went through a roller coaster of emotions during his teenage years. Brock Boeser's dad, Duke, was diagnosed with Parkinson's disease, a progressive nervous system disorder that affects movements. 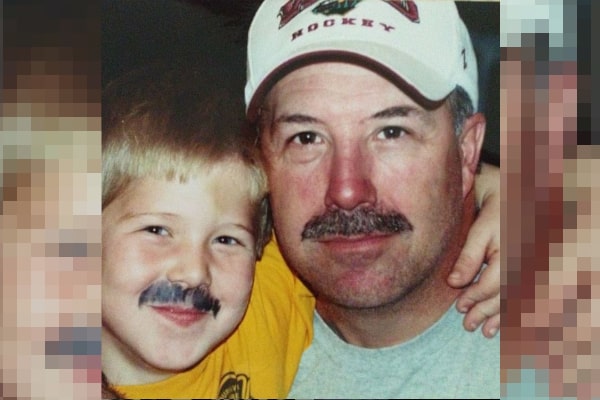 Brock Boeser's father, Duke Boeser, was diagnosed with a neurological disorder when Brock was a teenager. Photo Source: Brock's Instagram.

In addition, when Brock was a high school freshman, his father nearly died in a car accident. Although he survived, Boeser's dad was left with a severe brain injury that forced him to cease working.

The horrific accident that nearly killed Brock's father plunged the family into a financial crisis. His mother, Laurie, worked up to three jobs to support the needs of her three kids.

Furthermore, on early 6th August 2014, while Brock was in Slovakia, four of his close friends suffered a tragic car accident south of Minneapolis. One of his friends, Ty Alyea, died in the accident, while another, Cole Borchardt, was critically injured.

Brock was devasted by the news of his dear friend's death. Afterward, the American player dedicated his goal in the next game to his friends involved in the accident.

Aforementioned, Brock made his USHL debut with the Sioux City Musketeers. Nonetheless, a year later, he was traded to the Waterloo Black Hawks in exchange for Cooper Watson.

Boeser led the league in goals in his debut season with the Black Hawks and was enlisted on both the USHL All-Rookie Team and the First All-Star Team.

Concurrently, Brock played for the US national junior team in both the 2014 Ivan Hlinka Memorial Tournament and the 2014 World Junior A Challenge.

Moreover, Brock represented the team US in the World Junior Championships in 2016. Here, he helped his team win the bronze medal, scoring three points in seven games.

Let's look at Brock Boeser's career highlights while he was playing for the University of Dakota.

Moreover, Brock's outstanding display of skills in his rookie years led him to be picked 23rd overall by the Vancouver Canucks in the 2015 NHL Entry Draft. As such, he signed a three-year contract with the Canucks on 25th March 2017.

Later on, on the same day, Brock made his NHL debut in his home state of Minnesota and even scored his first-ever goal in the league.

The American athlete Brock rose to the media limelight when he became the first Canuck player of age 20 or younger to score a hat-trick in more than two decades. He achieved this feat against the Pittsburgh Penguins on 4th November 2017.

Since then, Brock has helped his team win many major games while continually putting forward his best performance. As a result, he was named MVP of the 2018 NHL All-Star Game, becoming the first rookie to be awarded the honor since Mario Lemieux in 1985.

Following the end of his entry-level contract with the Vancouver Canucks, Brock signed a new three-contract to remain with the team on 16th September 2019. A month later, he scored his third career hat trick for the Vancouver against the Los Angeles Kings.

Despite his stellar play with the Vancouver Canucks, Brock was a possible trade candidate in July 2020. However, Jim Benning, the team's general manager, dismissed the possibility of Brock being traded. Since then, there has been no news concerning his trade.

The American sports personality Brock Boeser's professional journey has not been smooth. He has sustained multiple injuries over the years, causing him to endure significant setbacks in his career.

First, Brock missed two months of the 2016-17 season while playing for the University of North Dakota. His injury cost his team the NCAA Division I National Championship.

Besides, on 5th March 2018, Boeser suffered a severe back injury that took him a total of six weeks to recover. He collided with Cal Clutterbuck of the New York Islanders and fell into an open gate at the Canucks bench.

Although Brock made his recovery and returned to his team in the same season, he was swiftly sent back to Vancouver after injuring his groin in a game against the Winnipeg Jets on 18th October.

Similarly, Brock's season was also cut short in 2019-20 due to a rib injury. The damage suffered was expected to take about eight weeks to heal. Well, Boeser was back on the active roster on 10th March 2020.

Brock Boeser Net Worth And Earnings

The renowned ice hockey athlete Brock Boeser frequently flaunts his lavish lifestyle and expedition on his social media. Concurrently, people worldwide are eager to find out all the funds he has accumulated throughout the years.

As the athlete has been playing hockey since his early years, Brock Boeser's net worth primarily consists of his earnings as a professional ice hockey player. Throughout his career, he represented multiple teams and won many reputed events. Hence, he must have been able to add sizable revenue to his assets from his profession. 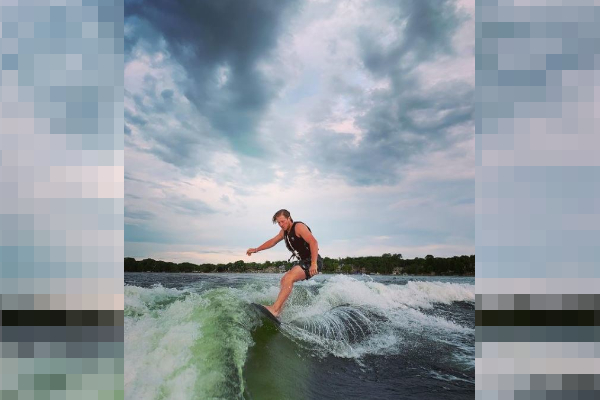 Brock Boeser enjoys a lavish and carefree lifestyle thanks to his income as a professional ice hockey player. Photo Source: Brock's Instagram.

Since making his NHL debut back in 2017, Brock has established himself as a notable player in the entire league. According to indeed.com, the average salary of an NHL player is around $2.69 million per year, which varies according to contract and player's performance.

As previously stated, Brock endorsed two three-year contracts with Vancouver Canunks. He first signed an entry-level deal in 2017 and then another in 2019.

Some of Brock Boeser's seasonal earnings during his time with the Vancouver Canucks are listed below:

Furthermore, Boeser has partnered with the famous sportswear brand Adidas since 2018. Therefore, he is bound to earn a significant sum of money from his agreement with Adidas too.

Who Is Brock Boeser Dating?

The top Vancouver Canucks prospect, Brock, has made his name heard far and wide within the sport of ice hockey. With so much success accomplished inside the rink, his admirers are curious to find out about his endeavors in his love life. Consequently, ice hockey enthusiasts are anxiously searching for information about Brock Boeser's girlfriend and his relationship status.

In 2018, it was rumored that Brock was dating a Vikings cheerleader named Vanessa. The news about the couple's relationship appeared after eagle-eyed internet detectives found a post on Brock's Instagram where he had tagged his alleged girlfriend. Nevertheless, the picture has since been removed, so we can assume that they are no longer together.

The duo was reportedly together till early 2018. However, no news about the couple's relationship has resurfaced ever since. The pair likely broke up due to Brock's demanding schedule.

Additionally, Brock has managed to keep his love life private and out of the public eye for quite some time now. Moreover, he has not mentioned anything about his girlfriend in any of the interviews. Therefore, it might be possible that the athlete is single at the moment.

Besides, Brock spends most of his time away from home, either training vigorously or competing in prestigious ice hockey events across the nation. Thus, he has little to no time to engage in romantic relationships.

Is Brock in love or not? We are not sure. But, we are confident that the native of Minnesota is living up to his dreams of competing in one of the highest levels of sports, making his family proud simultaneously.

Let's hope he finds love soon and we get to meet Brock Boeser's girlfriend or wife in the coming days.