Formula One is one of the most prestigious sports events and people involved with it can earn a lot. Image Source: Wikimedia Commons.

Formula One, or, more specifically, FIA F1, is one of the most prestigious racing series and one of the world's most respected sports events. Through its blessings, talented drivers from all around the world have been able to showcase their incredible abilities behind a steering wheel. The reputed car racing series is also one of the biggest sports in the world, with more than four hundred million fans and audiences throughout the world.

This high tempo and fast-paced racing sport consume and generate money like no other on this planet. Furthermore, an exclusive number of racers make millions per year, driving in this multi-millionaire Formula series. Similarly, countless individuals have been able to make a fortune driving in Formula One World Championships. Subsequently, If you were thinking of who the richest racers in this sport are, here is the list of the seven richest Formula One drivers in the world.

Former British racing driver Eddie Irvine Jr., born Edmund Irvine Jr., has had a prolific racing career with four major wins and 148 races throughout his career. The bountiful racer had an excellent racing career of 9 years in Formula One during the 90s and the early 2000s. The Englishman had an achieving career as he won four races and the Drivers' Championship in 1999 alone. The Northern Irish garage owner's son is a smart investor and was already a millionaire even before racing professionally. Additionally, Irvine Junior made much more after his start in the high-speed world of Formula One. 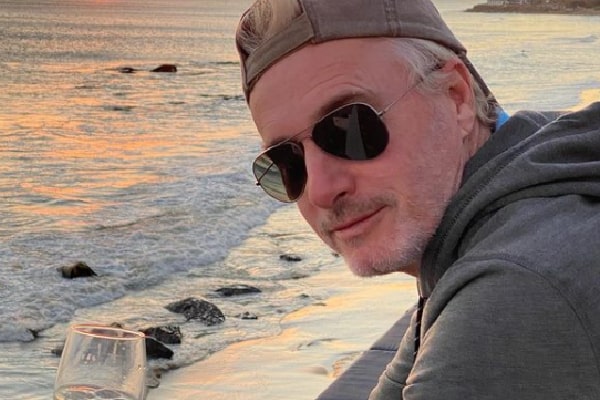 According to Celebrity Net Worth, Eddie Irvine Jr's net worth is a whopping $120 million. The racer earned all that sum through his salary, wages, brand endorsements, sponsors, and investments. Irvine Jr. won the Formula Ford series three times with the Van Diemen team during his pre-F1 career. He was among the top 3 finishers in countless other racing series, including the BBC Formula Ford 2000, International Formula 3000, Macau Grand Prix, F3 Fuji Cup, Japanese Formula 3000, and also the 24 Hours of Le Mans. Eddie was the runner-up in the 1999 Formula One Championship, as mentioned earlier. Though the prize money for all these races is not discussed in public, Eddie Irvine Jr. undoubtedly earned a huge amount through all this racing success.

Additionally, the racer was as smart as an investor too. He invested in property before and after his motor racing career. After his retirement, Edward owned 50 flats and houses throughout the UK through Chrishardzoe Development, a net asset of over $700K. Additionally, Edward also owns the Bangor Grammar School's former building and Irvine Sports complex. Having such fortune, Edward Irvine's net worth is the seventh-largest among the F1 racers out there.

The four-time Formula One World Championship winner, Sebastian Vettel, is the sixth richest Formula One, driver. The German racer who has been in professional racing since the early 2000s is the winner of four consecutive Formula One Championships from 2010 to 2013. Among the total of about $200 million, including the prize money and bonuses that a top-tier racing team gets after an F1 season, Vettel must surely get a large chunk of the sum.

As per Celebrity Net Worth, Sebastian Vettel's net worth is $140 million, which he has earned throughout his career. 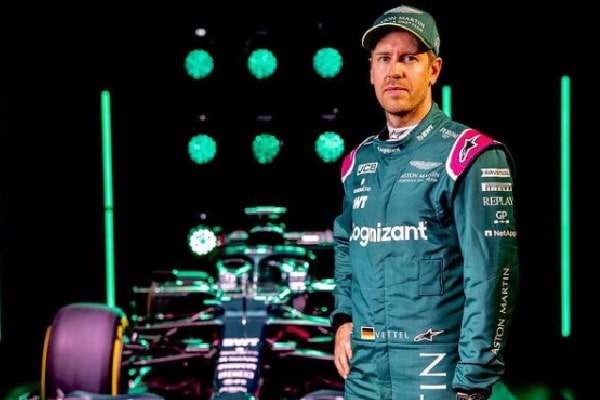 Sebastian Vettel is one of the most successful racing driver ever. Image Source: Sebastian's Instagram.

The riches Sebastian Vettel has gathered through his race wins, sponsorship with Infiniti, Shell, and Pepe Jeans, and partnership with Red Bull, Aston Martin would certainly gather up a hefty amount for the German. Additionally, Vettel owns a secluded Swiss farmhouse and many others properties throughout Europe, thanks to his fortune. He also owns multiple supercars, which are pretty expensive.

While Eddie Irvine Jr. had his go in Formula One a long time ago, Vettel is still active and hungry for more success. This drive for success would surely help him earn more and exceed his position as the sixth richest Formula One driver.

According to Celebrity Net Worth, The British Formula driver Jenson Button's net worth is $150 million. The brilliant British driver has driven for Williams, Benetton, Renault, BAR, Honda, McLaren, and Brawn GP and had earned most of his fortune during the seventeen years in Formula One. The 2009 Formula One Champion, Button has had a long racing career.

Throughout his career of more than twenty years, his multiple victories in the Formula Ford Championships, win in Super GT in 2019, and F1 victory in 2009, and his runner-up status in 2011, would garner a hefty salary for the racer. Button's brand endorsement of Head & Shoulders and an estimated annual income of $16.5 million ought to have lifted his net worth by quite a bit. 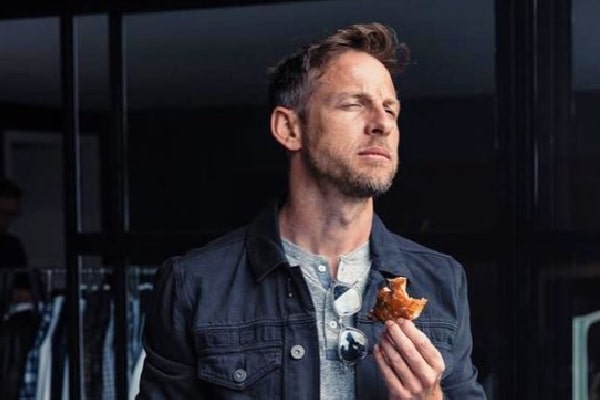 Jenson Button is a car fanatic as one would aspect and has multiple cars of his own, excluding those he uses for his races. His 1965 Ferrari 275 GTS is worth an astounding $1.7 million, and his 675LT Spider is worth $372K. Button also owns cars like a Mercedes-Benz, Ferrari F40, Ford GT, and McLaren P1. The multimillionaire racer is also a proud owner of a 72-foot yacht that's moored in Monte Carlo. The English racer certainly has a lot to his name and enjoys a lavish lifestyle, thanks to his fortune.

The two-time winner of the 24 Hours of Le Mans and two-time winner of Formula One, Fernando Alonso, is the fourth richest F1 driver globally. The Spanish driver, who was also the youngest one ever to have won the Formula One, won the championship in 2006 at the age of 24. Through his three-year deal with Mclaren Renault, Alonso was able to earn $32 million annually and supposedly earned $40 million in 2017. He currently has a $20 million a year deal with Alpine.

As a result of his legacy, the racer gets hefty bonuses, which positively impact Fernando Alonso's net worth. Additionally, Alonso has an endorsement deal of about $1 million with companies like Citibank, Pirelli, and Kimoa. Kimoa is his own lifestyle brand that sells Alonso's merchandise. 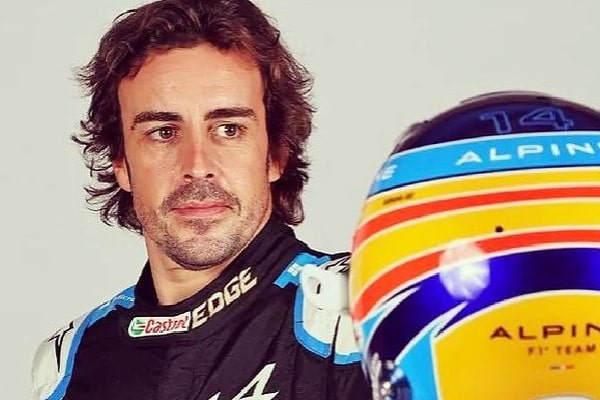 Fernando Alonso is one of the richest racers in the world. Image Source: Alonso's Instagram.

As per Celebrity Net Worth, Fernando Alonso's net worth is $240 million, mostly earned through his professional racing career and all the other aforementioned projects. The Spanish spend his millions on luxurious houses and a lavish lifestyle, one of which is his luxury villa in Northern Spain. Alonso also has a museum dedicated to his Formula One career and the journey that comes with such a life, called Spanish Samurai.

Known as The Iceman, Kimi Raikkonen is a multimillionaire Finnish racing driver who's won the 2007 Formula One World Championship. With a long career of more than 20 years in professional racing and 19 seasons in Formula One, Kimi is one of the richest sportsmen to prevail from Formula One. The second-highest-paid athlete in the world in 2009 is the third richest racecar driver in the world.

Raikkonen was associated with the McLaren Mercedes racing team and Scuderia Ferrari Marlboro during his first run in Formula one from 2002 to 2009, which helped him collect many of his riches during his earlier days. Subsequently, his sponsorship and brand endorsements from Singha, Bloq, Oakley, and Wrangler assist the Finnish driver in earning more than $2 million a year. 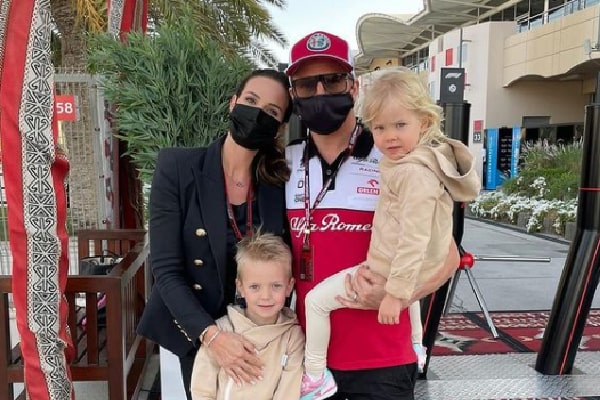 Kimi Raikkonen enjoys a comfortable life with his family because of his multi-million dollar fortune. Image Source: Kimi's Instagram.

According to Celebrity Net Worth, Kimi Raikkonen's net worth is a massive sum of $250 million. The 2007 F1 World Champion spends his millions on luxurious houses and fancy cars. He is the owner of a villa in Baar, a village near Zurich which he purchased in 2009 and named it Butterfly. His villa has an area of about 3k square feet with multiple swimming pools. It is believed that Kimi spent around $24 million on his dream villa.

Additionally, the millionaire race car driver is fond of supercars, as one could imagine. He owns a Rolls Royce Wraith Black Badge worth $330k. Additionally, his Lotus Evora S and Ferrari Enzo are worth around $130K and a whopping $2.6 million. Along with these, Raikkonen owns few other luxurious cars and enjoys a lavish life with his family.

It is estimated that the 2020 F1 winning team received a total of about $177 million as the payout. As mentioned earlier, the team's salary is determined, and the seven-time F1 Champion is likely to get a huge amount for his services to the Mercedes team. Additionally, as one of the most popular sports personalities, Hamilton is likely to have multi-million dollar endorsements and sponsors. The Englishman earns about $12 million a year from brand endorsement and sponsorship from Monster Energy, Puma, Sony, Tommy Hilfiger, Bose, and MV Agusta Motorcycles. 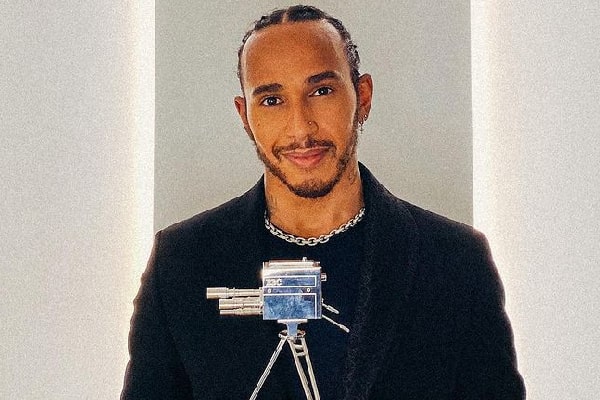 Lewis Hamilton is one of the best F1 drivers in the world. Image Source: Lewis's Instagram.

As per Celebrity Net Worth, Lewis Hamilton's net worth is $285 million, while The Times suggests that he has $311 million to his name. He accumulated this fortune through his endorsements and salary of about $42 million. The multi-millionaire racer spends his millions on luxurious houses and supercars. Lewis is also a proud owner of a $21.7 million four-story six-bedroom house with a lush green garden in Monaco. The list of his car collection runs much longer, among which the $1.6 million Ferrari 599 SA Aperta, $2.6 million Pagani Zonda 760LH, and $1.4 million Ferrari LaFerrari are some of his prized possessions. All the money Hamilton has earned through his talent and hard work has allowed him to live a lavish life with the ones he loves the most.

The German Formula One legend Michael Schumacher is the richest F1 driver. The currently retired racer is reported to have earned about $34 million a year during his peak, which was throughout his F1 career from 1992 to 2012. Schumacher's victory in the seven Formula One World Championships with Scuderia Ferrari Marlboro and Mild Seven Benetton is the primary factor resulting in him as the richest F1 driver. Additionally, his astounding brand endorsement deals with Shell, Marlboro, and Vodafone resulted in the racer earning more than $50 million a year. 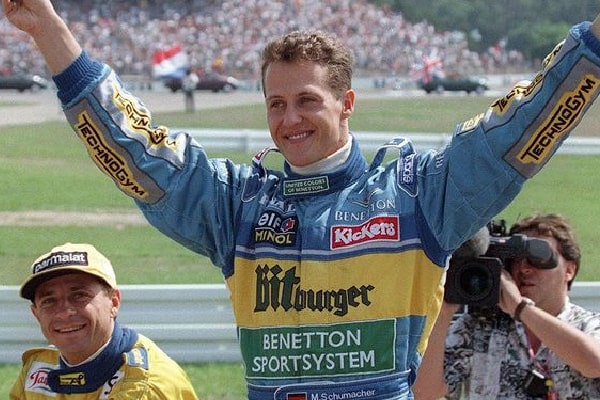 Michael Schumacher surely has earned a ton from his career in the Formula One: Michael's Instagram.

As per Celebrity Net Worth, Michael Schumacher's net worth is $600 million, earned through his salary and sponsorships. Michael spends his millions on countless things, including a number of properties in Switzerland. Additionally, the racing legend also owns the 430 Scuderia, which cost $281K, Ferrari 599 GTB that has a price tag of $310K, and countless other supercars.

So, here are basically the 7 richest Formula One racers in the world. Let us know if your favorite driver is on the list.