Sir Lewis Carl Davidson Hamilton, notably known as Lewis Hamilton, is a famous British racing driver, activist, and also musician. The racer has won seven Formula One World Champion and has the highest number of Grand Prix wins over Michael Schumacher. His wins and titles have comfortably made him one of the greatest racing drivers the world has ever seen throughout his career and is the first black driver to race in the sporting event.

Hamilton received a knighthood in 2020 as part of the Queens New Year's honors list. The Mercedes driver had worn an anti-racism slogan and took the knee during the Formula One season as part of the Black Lives Matter movement. He was also listed among Britain's richest young sportsmen under the age of 30. Let us know more about Lewis Hamilton's biography and his career.

Lewis Hamilton entered the world on January 7, 1985, in Stevenage, England. He was born to his parents Anthony Hamilton and his mother, Carmen Larbalestier. His parents separated when Lewis was just a young kid, after which he lived with his mother and older half-sisters, Samantha Lockhart and Nicola Lockhart. Lewis also lived with his stepmother Linda Hamilton and his half-brother Nicolas Hamilton, a racing driver in the British Touring Car Championship.

Lewis started his driving journey with the help of his father, Anthony, at the age of six. His father bought him a go-kart for Christmas and promised to support his racing career if he performed well in school. Anthony left his job as an IT manager and became a contractor while also doing odd jobs as a dishwasher, salesman, and put up signs for estate agents, to support his son.

Lewis Hamilton attended The JohnHenry Newman School, where he was engaged in various sports including karate, football, and racing. The racer went on to study at a private education institution Cambridge Arts and Sciences, in 2001.

The sportsman started kart racing when he was just eight years old. He began to win races and cadet class championship and became the youngest driver to win the British Cadet Karting Championship at 10. In 1997, Lewis won his second Super One series and British title and was offered a role in the driver development program for McLaren by Ron Dennis. His early start as a race kart driver and talent helped him progress in the Intercontinental A to reach Formula Super A and win the European Championship in 2000. He was placed in the Rising Star member by the British Racing Driver's Club in 2001.

Hamilton began pursuing his racing career in the 2001 British Formula Renault Winter Series and finished fifth in the rankings. He finished in third place in 2002 Formula Renault UK with Manor Motorsport. The racer went on to sign a deal with McLaren and made his debut in the 2004 Formula 3 Euro Series. He would win the Bahrain F3 Superprix and compete twice in the Macau F3 Grand Prix. After a series of a feud between McLaren executive and CEO Martin Whitmarsh and Lewis's father Anthony about his sons move up to Grand Prix 2 which resulted in Whitmarsh tearing up Lewis's contract. However, Lewis re-signed with the team two months later after calling Whitmarsh on the phone.

Hamilton went on to dominate the Euro Series Championship in the 2005 season with 15 wins in 20 rounds and won the Marlboro Masters of Formula 1 at Zandvoort Circuit. By the end of the season, Lewis was ranked 24th in the Top 50 Drivers of 2005 by British magazine Autosport.

Hamilton partnered with two-time defending World Champion Fernando Alonso and finished runner-up in the 2007 World Drivers Championship behind former McLaren racer Raikkonen. Though the team had a good season, Hamilton and Alonso were involved in incidents that resulted in problems between the two drivers. This led to Alonso and McLaren terminating their contract by joint agreement.

Meanwhile, Hamilton signed a £35.8 million ( $49.95 million) deal to stay with McLaren until 2012. In the 2008 season, Lewis created history by becoming the youngest Formula One World Champion spectacularly after denying Felipe Massa the title in the last corner of the last lap. This made Lewis Hamilton the first British racer to win the World Champion since Damon Hill in 1996.

For the next three years, Lewis had a quiet show, as the World Champion climbed no higher than fourth place due to personal problems and loss of focus. However, Hamilton promised to return to form for the 2012 season and won four race-wins and finished fourth in the rankings. Before the end of the year, the British racer announced his signing with Mercedes for the 2013 season. He had signed a three-year deal which was reportedly worth, $100 million (£ 61.6 million). After joining Mercedes, Hamilton performed very well and won the Hungarian Grand Prix.

The 2014 season was also highly successful for Lewis as he won 11 of the total 16 race wins by Mercedes in 19 races and also won the championship. He also clinched the 2015 world championship title after a successful season with ten race wins and a record of 17 podium finishes matching his hero Ayrton Senna's three World Championships and winning the Us Grand Prix against his team rival and childhood karting teammate, Nico Rosberg.

The British racer lead throughout 2017 after registering 11 pole positions, setting a record for the all-time most pole positions and nine race wins to secure his fourth World Driver's Championship title. In 2018, Hamilton and Valtteri Bottas competed for their fifth world title, called Fight for Five, by journalists and fans which Hamilton set a new record for the most points scored in a season with 408 points to clinch the World title. He later signed a two-year contract with Mercedes for a reported 40 million pounds per year, becoming the highest-paid Formula One driver in history.

The British racer leveled up his stats after securing his sixth crown at the 2019 United States Grand Prix and won his seventh World Championship in the 2020 season, which was heavily impacted by the COVID-19 pandemic. He missed his first race since his debut in 2007 in the 2020 Sakhir Grand Prix after contracting the virus but managed to recover and win the 2020 Turkish Grand Prix.

According to The Times, Lewis Hamilton's net worth is estimated at $311 million. He is the highest-paid F1 racer globally with a contract of 40 million pounds per year with Mercedes.

The racer's income is also generated through his appearance in movies like Cars 2, One, and Laura: 33 Days- Born to be Wild. We can be sure that some of his fortunes are attributed to his acting career as well. 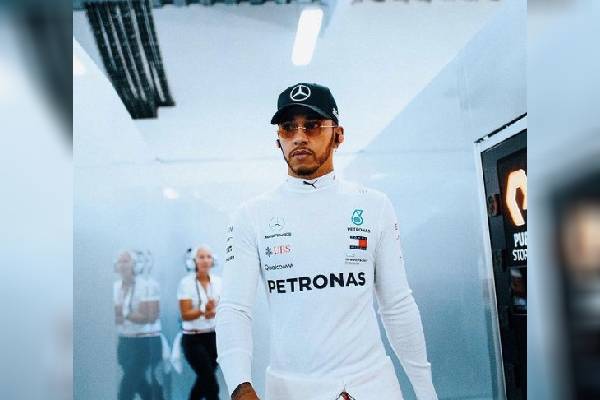 Lewis Hamilton has an estimated net worth of $311 million. Image Source: Instagram/lewishamilton.

The world champion has also signed endorsement deals with companies like Puma, Sony, Bose, Monster Energy, Mercedes-Benz, L'Oreal, Vodafone, and Tommy Hilfiger. According to Forbes, Lewis generates $12 million from his endorsement deals which add up to his net worth. With such an immense fortune, Lewis has been able to lead a very comfortable and lavish lifestyle.

The racer bought a $43 million penthouse in New York in 2017 and also owns a four-story mansion built-in 1860, Kensington, West London, for $25 million alongside multiple apartments in Geneva, Switzerland, and Monaco.

The British racer has also designed a collection of unisex and men's clothing and accessories under the brand TOMMYXLEWIS, after joining forces with American clothing brand Tommy Hilfiger. His clothing products are also a factor in increasing Lewis's income.

Being a racer himself, Lewis is a car fanatic and owns an expensive collection himself. He is one of the 26 owners of the rare 2006 Mercedes CLK GTR in the whole world which was priced at $1 million each. Lewis also owns one of the 209, LaFerrari Aperta which costs about $2 million. Lewis's love for cars doesn't end here, his love for classic cars has made him an owner of the modified Shelby GT500 and a 1967 Shelby 472 Cobra. Hamiltons also owns a specially designed Pagan Zonda with his initials on the supercar made just for him with a price tag of $1.8 million.

Thanks to Lewis's charm and popularity, he has been in many relationships.

Lewis Hamiltons was in a relationship with a pop star and TV personality Nicole Scherzinger. The British racer dated Nicole from 2007 until 2015 with various complications between the duo over the years. He also dated his childhood lover Jodia Ma for four years whom he had met at Cambridge School of Arts and Science. The couple broke up in 2007 and lewis went on to find love with Vivian Burkhardt who was a presenter in the Miss World Pageant 2007. Though Vivian had managed to steal Lewis's heart, the lovely pair only dated for a few months.

According to Essentially Sports, Lewis and Rita Ora have been spotted together multiple times on various occasions but their relationship with each other still remains a mystery. Hamilton was also rumored to be in a relationship with American rapper Nicki Minaj after the pair were spotted at New York Fashion Week together.

Though the British national has shared his thought about having children, Lewis does not want to be a father who is not present with his family because of his career. He hasn’t shared any details to settle down yet, but his fans are hoping that the racer might just surprise them soon.

Love For His Pets Coco and Roscoe

Lewis Hamilton is an animal lover and has two British bulldogs, Coco and Roscoe. Sadly, the Mercedes driver announced the death of one of his pet dog, Coco, on his Instagram post. Lewis shared pictures of Coco along with a long caption stating the demise of his pet who passed away at the age of six, following a heart attack. 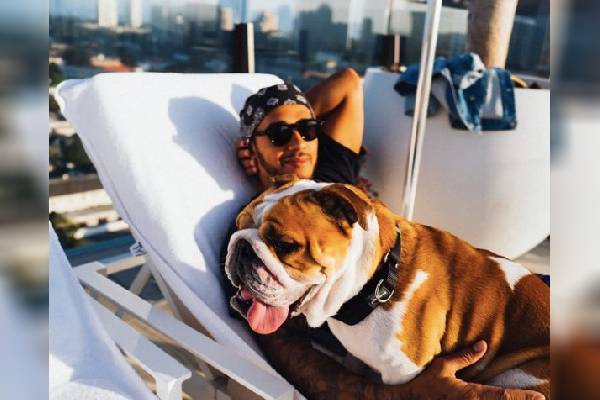 Lewis had adopted Coco after she was about to be taken down by her breeder as she could not afford the necessary payments for the dog’s survival. The racer shared the story of his dog to his followers on June 19, 2020. However, his other pet Roscoe is alive and well who feasts on a vegan diet, and accompanies his owner everywhere he goes. The racer has even made an Instagram account for his pets which has over 289k followers.