Top 6 Richest Female Wrestlers With Their Net Worth And Fortune

Home Featured Articles Top 6 Richest Female Wrestlers With Their Net Worth And Fortune.

Here, we have the top six richest female wrestlers with their gigantic net worth. Photo Source: Ronda Rousey's Instagram.

Wrestling has been contemplated as one of the most viewed sports of all time. The brutality of the fight and the real injuries increase the thrilling experience of the audience. Yet despite its graphic nature, wrestling continues to be loved all around the globe.

Although men are at the forefront of professional wrestling, women are also not far behind. Be it street fights, UFC, MMA, or WWE; female fighters have challenged the mens' dominance in the field. Moreover, these days new opportunities are constantly arising for them to showcase their talents.

Alongside getting respect and fame, female wrestlers also earn a considerable income from their profession. Some make most of their earnings from fighting alone, whereas others also earn from endorsements and promotional works.

Let's see the top six richest female fighters and their massive net worth in this article.

We are starting our list with The Boss Sasha Banks. She is one of the most decorated female athletes who debuted in 2010. Moreover, the wrestler is best recognized for her signature move, Bank Statement, which has won her many matches.

The wrestler joined NXT in 2012 after performing in Chaotic Wrestling an independent circuit. However, her Raw debut is still considered phenomenal as it was the beginning of the Women's Revolution in the WWE. Moreover, she, Charlotte Flair, and Becky Lynch showed their presence by defeating Team Bella that night.

Let's watch that historic moment below:

Banks quickly established her dominance in the WWE and has won many titles. For instance, she has won the Raw Women's Championship five times. Moreover, Sasha and Flair made history by competing in the first women's Hell in a Cell match on October 30, 2016.

Aside from that, the athlete has also appeared in many WWE series and television shows. She is currently part of the WWE's Smackdown brand. Moreover, Sasha's salary from the brand is estimated to be $250,000 (£183K).

Hence, Sasha Banks' net worth amounts to $3 million. She is indeed one of the highest-earning stars in Smackdown.

There is not a single wrestling fan who hasn't heard of "The Man" Becky Lynch. Her transformation from a sweet to ruthless fighter in the WWE still causes goosebumps.

Aforementioned, Lynch made her Raw debut with fellow stars Banks and Flair. She then joined Team PCB, a trio of her, Flair, and Paige. Afterward, she performed with the team for several months before Paige's betrayal.

The Irish fighter only received much attention after turning against her former teammate Charlotte Flair in 2018. She then started The Man movement, which showed excessive aggression for a win. Furthermore, it proved successful, and Becky won her first Smackdown Women's Championship soon after.

Since then, the champ has won the 2019 Royal Rumble match and obtained both Raw and Smackdown Women's Championship at Wrestlemania 35. Aside from that, she is featured in five WWE video games and has acted in several movies. 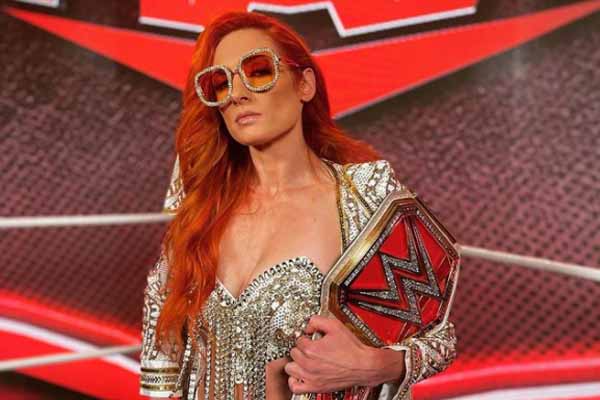 Lynch is also married to fellow wrestler Seth Rollins, who has a net worth of $9 million to his name. The couple welcomed their first child, Roux, on December 4, 2020.

The wrestler returned to WWE after fifteen months of maternity break on August 21, 2021. She beat her opponent in less than half a minute and won her fourth Smackdown Women's Championship. Furthermore, she is currently drafted in the Raw brand and is the Raw Women's Champion.

According to GiveMeSport, Lynch's salary from WWE amounts to $3.1 million (£2.1 million). She is the highest-paid female wrestler in WWE.

Coming in fourth of our list is an iconic WWE Diva Nikki Bella. She defines the era before the WWE, or other wrestling companies offered new opportunities for females. Nonetheless, she contributed to increasing new options for the females in the brand.

The WWE star debuted as a part of The Bella Twins in 2011. She and her twin initially tricked their opponents and audience by using their identical features in the matches. Eventually, both were caught, and Nikki began competing professionally.

The athlete is known for being involved in many WWE storylines and feuds. For instance, she and her then-boyfriend, John Cena, were rivals with The Miz and his wife, Maryse Ouellet.

Likewise, Bella holds the longest reign of the WWE Divas Championship. Additionally, she is inducted into the WWE Hall of Fame. Furthermore, according to TotalSportek, Nikki's salary from WWE amounted to $350,000 in 2018. She was one of the highest-paid female wrestlers in the brand. 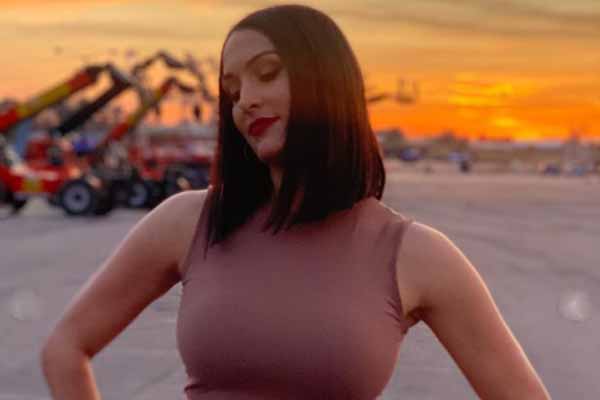 Nikki Bella's net worth comprises her earnings from her wrestling career and other business ventures. Photo Source: Nikki Bella's Instagram.

Aside from wrestling, the former champ has appeared on WWE Total Divas, Total Bellas, Dancing With The Stars, etc. In addition, she and her sister share a YouTube channel, two wine labels, and a podcast. Moreover, her YouTube channel, The Bella Twins, makes $1.2K - $18.5K monthly and $13.9K - $221.8K yearly.

The businesswoman also holds a real estate license and has made fruitful investments. For instance, she put her Arizona home for sale with a price tag of $1.995 million in 2020.

Hence, combining all her business ventures, Nikki Bella's net worth stands at $8 million. Although she has retired from wrestling, people still remember her fondly.

Following Nikki on our list of richest female wrestlers is none other than her twin sister Brie Bella. She is well-known for defeating her opponents with her signature missile dropkick and running knee.

The WWE star debuted in Smackdown on August 29, 2008, and began a scripted rivalry with Victoria and Natalya Neidhart. She and her twin made up a team and were involved in many WWE storylines. Furthermore, Brie got much attention after feuding with Stephanie on behalf of her husband, Daniel. It also caused the fraction between the twins.

Bella has won one WWE Divas Champion in her career. She is also inducted into the WWE Hall of Fame alongside her twin, Nikki. Furthermore, before retiring, Brie's salary amounted to $300,000 from the brand.

Likewise, the retired WWE wrestler has starred in Total Bellas and WWE Total Divas. Additionally, she has launched a clothing line with Nikki under her daughter, Birdie Joe Danielson's name. Some of the items and their prices are listed below:

Hence, Brie Bella's net worth amounts to $12 million. Combining both sisters' fortune, The Bella Twins' net worth calculates to $20 million.

Ranking second on our list of wealthiest female wrestlers is the legendary Ronda Rousey. Often called the Baddest Women on the Planet, Rousey has succeeded in UFC, WWE, and the Olympics.

The UFC fighter shocked the world after making a surprise entry at the 2018 Royal Rumble. She finally made her long-awaited WWE debut at Wrestlemania 34. Moreover, Rousey won the Raw Women's Championship and held it for 231 days.

Aside from wrestling, the former champ has starred in many movies. Her acting credits include The Expendables 3, Furious 7, Mile 22, Entourage, etc. Furthermore, she has appeared in WWE Total Divas, WWE video games, UFC video games, etc.

In her fight against Cat Zingano at UFC 184, the wrestler earned $65,000 to just show up. She then cashed an additional $65,000 for the win and a nearly $1 million Pay Per View bonus. Furthermore, Rousey made $14 million in prizes, endorsements, and media appearances in 2015. She was also paid $3 million for showing up in the fight against Amanda Nunes in 2016. 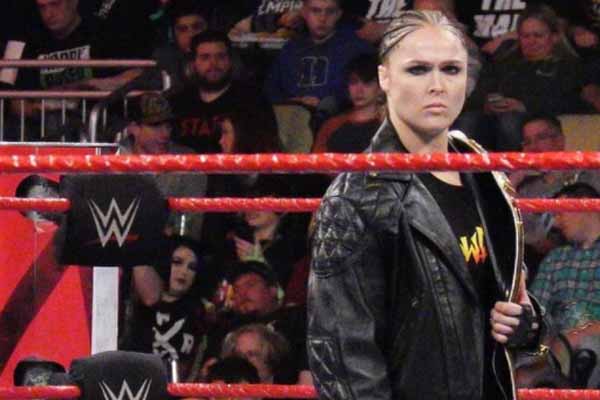 Likewise, Ronda's salary from WWE was $1.5 million in 2018. Her contract in the following years must have seen an increase in her income.

Hence, Ronda Rousey's net worth amounts to a whopping $13 million. She has vast potential in WWE and will likely earn more in the future. Moreover, she is also counted among the richest UFC fighters in the world.

Finally, coming at number one on our list is Stephanie McMahon. She is one of the most important figures in WWE who has been credited for providing opportunities for female athletes in the brand.

The former wrestler debuted as the WWE chairman Vince McMahon's sweet daughter in 1999. She was initially involved in the feud between her father and The Undertaker. Furthermore, she later was included in Vince's rivalry with her now-husband, Triple H.

Speaking of Stephanie's husband and father's fortune, Vince McMahon is a billionaire and has a net worth of $1.6 billion. Triple H on the other hand has $150 million worth of riches to his name.

Aside from that, Stephanie is known for fighting against Brie Bella and turning her twin, Nikki against her. Additionally, she is mostly seen as a villain character in WWE with her constant interruptions on WWE superstars' affairs.

Hence, Stephanie McMahon's net worth stands at a gigantic $150 Million. She has undoubtedly made a fortune from her WWE career.

Aside from the above-mentioned female wrestlers, Trish Stratus, Lita, Bianca Belair, and others also have made a fortune from their wrestling careers.