One of the top 10 UFC middleweight Champions, currently #7, Sean Strickland, shares in his Instagram, that he hates former UFC champion, Ronda Rousey.

Yes, Strickland, on October 9 couldn't help but share his opinion on Rousey's comment on having suicidal thoughts for losing in UFC in 2016. He was enraged by how Rousey could make Suicide sound so cool in this world where Suicide and Depression are like terminal illnesses, cancer.

Let's get into more detail!

One of the top female WWE performers and former UFC champions Ronda Rousey, was nearly undefeated in MMA. But, in 2016, after facing back-to-back knockout losses, Rousey lost again to champion Holly Holm at UFC.

The same year, Ronda appeared on the Ellen show. She shared with Ellen DeGeneres that her loss started giving her suicidal thoughts. Rousey started crying and said after she lost, she was in the medical room and was thinking what is she if she's not a fighter? Rousey sat there and thought of killing herself. She kept on thinking about what she is going to do anymore, and she was nothing without this identity of a fighter. 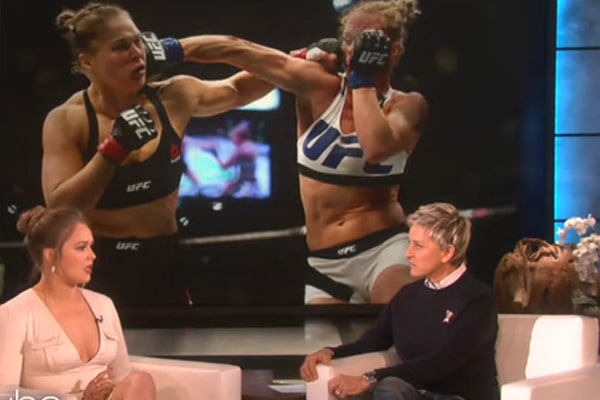 Ronda Rousey sharing about her loss in 2016 UFC Fight and having suicide thoughts with Ellen DeGeneres on the Ellen Show. Source: Social Media/YouTube

With multiple depressing thoughts of losing herself and eventually killing herself, Rousey then looked up to her then-boyfriend current husband, Travis Browne. She then thought that she needed to have her boyfriend Travis's babies and needed to stay alive. Ronda laughed and shared that was what she was thinking and only shared with her boyfriend then.

Ellen then thanked her for sharing about this episode of Rousey having such suicidal thoughts and then overcoming them. A lot of people who would know this, who would have similar depressing thoughts in life, might get a positive note that even such a fighter could have such thoughts and deal with them.

Rousey then said that all the best things come from the worst things. She then started thinking about what her actual purpose is. Winning all the time is not best for everybody. And all may have a moment of picking up themselves from the floor. Rousey shared that she believes she is still undefeated because being defeated is a choice; everybody has losses in their lives, but she chooses to always be undefeated.

Ronda Rousey also shared she will be fighting again.

You can watch the video with Ellen here.

Rousey's thoughts on her loss only enraged the current UFC fighter, Sean Strickland.

According to him, he hates podcasts, and he hates Ronda Rousey. He added Rousey is everything that is wrong with this world. He explained he hates Rousey for what she shared about her loss and her having suicidal thoughts. Then, on the seconds she is ok because she wants to have babies with her boyfriend, her man Travis. She wants to live to have his babies. And Rousey's appearance her thoughts was everywhere in the news and all around.

Sean hated it because Suicide sounded so cool. He didn't know when Suicide became so cool. Netflix even made a series, '13 reasons why' Everyone is depressed, everybody is suicidal. He doesn't think this is cool.

According to him, Depression is like cancer, a terminal. It's like herpes, you might not have it, but it's always there; you have it and is waiting to come out. For those who are suicidal, their thoughts and their conditions are worse. They keep on dwelling on it, think about what, how, and where they do it, and fantasize about what and how people will take it. It's miserable. It's not a small thought. And Ronda took such a serious thing as, thought for losing a fight and said she overcame it in a strong moment. And it's not. Sean Strickland took this very seriously on what Ronda said.

Ronda whose father committed suicide might not have thought of a joke though.

Ronda Rousey doesn't have any comments on it yet.

Ronda Rousey Married, Gave Birth To A Daughter, and Made WWE Return

Ronda Rousey had the end of her MMA career in the UFC Hall of Famer in 2016 after losing to Amanda Nunes and Holly Holm. She took the loss hard. Though her MMA run ended that way, there is no denying that Rousey was the first female UFC champion. She holds UFC records for the fastest win in a women's title fight and the longest finish streak in title fights. One of the biggest mainstream stars, Rousey remains a legend of the UFC fight game.

Ronda Rousey also has a net worth of $13 million.

She took a break, but after less than a year, Rousey turned to professional wrestling.

On August 2017, Ronda Rousey had a beautiful Hawaiin wedding with her boyfriend, Travis Browne. Travis was married twice before his marriage to Ronda and had two sons from a previous relationship.

Rousey then welcomed her first daughter with her husband Travis on September 2020 and named her La'akea Makalapuaokalanipo Browne.

Rousey has shared her precious moments with her husband, daughter, motherhood, and family in her YouTube Channel, which has around 1.64 million subscribers.

Ronda Rousey is the current WWE SmackDown women's champion. Rousey, however, got suspended in August after she attacked an official at WWE SummerSlam. On October 8, WWE Extreme Rules 2022 match was held in Philadelphia; Ronda defeated Liv Morgan and won the SmackDown Women's title.

Sean Strickland on the other hand is fighting against Jared Cannonier for UFC Fight Night Event on Oct. 15