Nick Cannon, a famous TV & Radio host, comedian, actor, rapper, singer, producer, writer, director, philanthropist, DJ, children's book author, and activist, has entertained his audience for over two decades. Cannon is equally famous for being the father of ten children with six different baby mamas. And guess what, 11th baby from ex Abby De La Rosa and the 12th baby from girlfriend Alyssa Scott are on their way. And there is no stopping.

After being comfortable with a polyamorous lifestyle for this long, is Nick changing his mind and getting married? If yes, then who is Cannon's to-be wife? Is she one of Cannon's baby mama or his new girlfriend? After the divorce from his first and only wife, Mariah Carey, so far, Nick has often said that his relationship with his first wife is like a fairytale. And he will never ever get married again. However, this question came to everyone's mind after Nick Cannon gave a hint.

Let's find out in more detail!

The 'Wild 'N Out' host is in the news every year for being in multiple relationships and having babies. He is also seen and has been present with every baby mama at the baby shower, photoshoots, parties, and in every baby delivery. He even has explained often how he dedicates his time to his children, even an entire day. People wonder how he manages to do that. Nick has definitely left everyone wondering.

However, when he posted on Insta with a caption that he was finally doing what the world wanted him to do with a ring emoji. People started guessing if Nick had finally decided to get engaged.

The rapper-turned-singer released his music video performing 'Eyes Closed' this year in 2022. He posted and promoted his song via social media.

And this was actually an engagement publicity stunt by Nick Cannon to promote his music video.

Nick's First and Only Marriage with Ex-Wife Mariah Carey

Mariah was his dream girl. The Masked Singer host has acknowledged this fact many times that his love and relationship with his ex-wife Mariah Carey was like a fairytale. Let's have a brief look into Nick Cannon and Mariah Carey's relationship story.

The first meeting happened between the two at the 2005 Teen Choice Awards. Nick presented Mariah with a surfboard award for choice Music R&B. Cannon has spoken about Carey multiple times before in his interviews which caught the Grammy-winning songstress's attention, and they had a small talk that day before they went to stage.

After three years, Cannon was seen performing in Carey's music video,' Bye Bye.' This led to everyone speculating that these two might be dating. Though they denied this rumor, the couple was soon spotted getting cozy on DaBrat's 34th birthday at a Las Vegas club. In May 2008, there was a confirmation by Cannon's relative that Nick Cannon tied the knot with his love Mariah.

Soon, Nick and Mariah opened up about how they got married in a private wedding ceremony. Nick is 11 years younger than Mariah. But age never could be the reason not to fall in love.

The newly married couple was very romantic and had great thoughts about each other. The couple called themselves soulmates and Mariah's 17-carat wedding ring worth $2.5 million then certainly caught everyone's eye whenever the couple was spotted together after marriage.

Before tying the knot with each other, Mariah Carey was married to music mogul Tommy Mottola and later divorced him in 1998. Cannon was also engaged to Selita Ebanks, Victoria's Secret model for a few months.

On April 30, 2011, which is the same day as the Cannon couple's wedding anniversary, the couple welcomed twins, a baby boy, and a girl, Moroccan and Monroe Cannon. Carey had suffered miscarriage two years before she got pregnant with the twins. 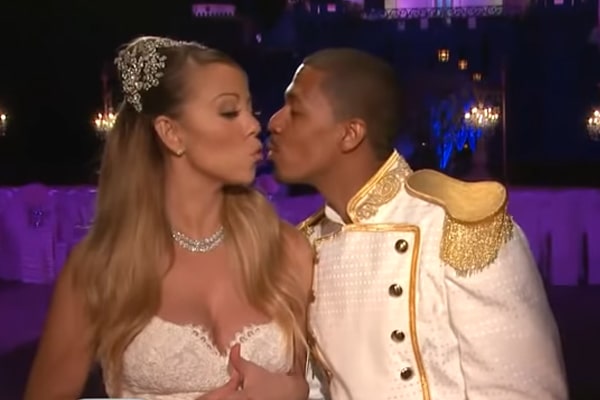 The couple was going great, reliving their magical marriage moment every year, but they surprised fans when Cannon confirmed that he and Carey had separated in December 2014. They made their divorce official in 2016. However, they both co-parent their kids and focus on their kids' well-being.

After that, the two started their own love journeys. However, Cannon often mentioned that he would never marry again. He said so in the It's Tricky with Raquel Harper podcast. Cannon added that he is not built for marriage, he couldn't work out his first, so he would not repeat it again. He no longer believes in the traditional sense of monogamy.

Again in July 2022, Nick Cannon opened up about his ex-wife Mariah Carey on an episode of 'The Hot Tee Talk Show'. He revealed that she is his fantasy love and asked if it was possible, he would rewind time and be with her. He would never have a love like Mariah Carey.

Nick Cannon says he loves children. He is living his word and is parenting nine children with more to arrive this year.

Nick Cannon is welcoming a baby (it could be twins, not confirmed) with his model girlfriend, Alyssa Scott. The couple had a baby boy Zen whom they lost to a brain tumor when he was just 5 months old. Scott revealed in October that she was pregnant with Nick's second child and confirmed on November 3, 2022.

Alyssa has a beautiful daughter from her previous relationship and is happy to welcome another baby with Cannon this year.

Rise Messiah Cannon is the name of the beautiful, healthy baby welcomed by parents Nick Cannon and Brittany Bell on September 2022.

Cannon and Bell share three kids with Rise now. They are parents to a son, Golden Sagon Cannon who was born on Feb 21, 2017, and a daughter Powerful Queen Cannon, born on Dec 23, 2020.

With his relationship with Abby De La Rosa, Nick has fathered twins, Zion and Zillion Cannon, born on June 14, 2021. And Abby is pregnant with her third child with Cannon.

With model girlfriend Bre Tiesi, Cannon has a baby boy, Legendary Love Cannon, who was born on July 2022.

The Price is Right Model LaNisha Cole, became a mother to a beautiful baby girl, Onyx Ice Cole Cannon on September 14, 2022. And yes, Nick Cannon is the father.