Any NBA fans must be well-familiar with Tristan Thompson, the veteran athlete who has been actively playing since 2011. From starting his carer with Cleveland Cavaliers to now competing for Chicago Bulls, his career has seen lots of ups and downs.

Apart from his decade-long playing career, Thompson has also made headlines with his romantic affairs. And no people, we are not just talking about him being affiliated with the popular Kardashian family member; in fact, the sportsman's cheating scandals have also surfaced in the media.

Recently, Tristan was caught alongside a gorgeous diva, which has made many people curious whether she is his new partner. So, is she Tristan Thompson's new girlfriend? Stay tuned for we will update you on the matter down below.

Left With An OnlyFans Model

The NBA personality was seen attending Jack Harlow's concert after-party in September 2022. However, he didn't leave The Nice Guy eatery alone, instead, Thompson was seen departing with the model Juanita JCV. The basketballer was seen rocking a black outfit overall, and Juanita was also donning a black skirt.

Thompson and his female companion left together in his car, and several photographers were able to snap shots of them sitting in the backseat. To those who are not familiar with Juanita Belle, she is an OnlyFans model who had also shot X-rated scenes with rapper Tyga. 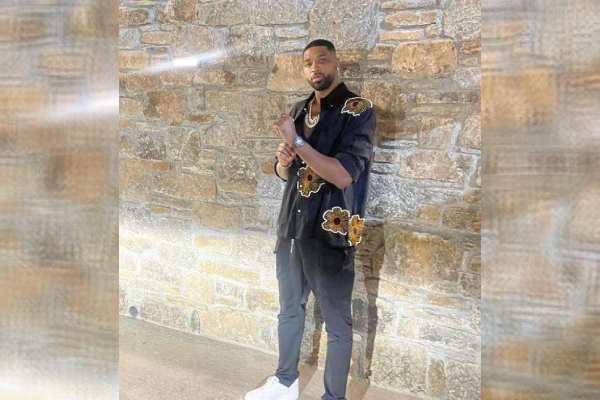 The gorgeous lady has a massive social media following, with her IG boasting 2.2 million followers. But, how did the entertainment star and NBA player get to know each other? Are they now an item? Sorry, folks, but we have to wait till both parties talk about their affairs to know the story.

Nevertheless, Thompson's night out with the OnlyFans model intrigued many of his fans. Many of you might think the media is making a big issue of a trivial matter such as being spotted with a female friend. However, Tristan has been linked with so many controversies regarding his past affairs, that this news carries just as much weight. Want to know more, then head down to the sub-heading below.

Having come into the limelight, one can hardly avoid media scrutiny. There are very rare cases of celebs being able to keep their dating affairs away from the public eye. And renowned NBA player like Tristan has also been subjected to constant gossip and paparazzi's following from the get-go. Unlike others, he hasn't exactly been secretive about his relationships either.

The Bulls athlete was first said to be dating Jordan Craig. She is a lifestyle blogger and social media influencer. The ex-pair dated from 2014 to 2016. In addition, Tristan welcomed his firstborn, Prince Oliver Thompson, in December 2016, with his ex-partner, Jordan. He often shares adorable pictures of his son on social media.

The pro basketball player got much attention for dating Khloe Kardashian. The couple began seeing each other in August 2016, and as per Thompson, he had already called his relationship off with Jordan at that time. The duo dated for nearly two years before breaking up for the first time in 2019.

Tristan Thompson's ex-girlfriend, Khloe, gave birth to their daughter, True Thompson, on April 12, 2018. At that time, the rumors about Tristan allegedly cheating on his then-partner had surfaced. Still, the lovebirds got back together in 2020 after quarantining together.

Tristan and Khloe separated in June 2021 again. Amidst their break-up, the basketball player's cheating affair with fitness instructor Maralee Nichols came up. In fact, their romance resulted in the birth of Thompson's third child, Theo Thompson.

The player became a father for the fourth time on August 5, 2022, after welcoming a baby boy via surrogate with his ex-girlfriend, Khloe. The former pair aren't together but are co-parenting together.

Also, will you be interested in knowing whether Brittany Snow is getting back with her hubby?

Khloe Kardashian Speaks Up About Her Relationship With Tristan Thompson

As already mentioned, Kloe Kardashian's ex-boyfriend was seen leaving a venue with the OnlyFans model recently. At the same time, Tristan Thompson's baby mama, Khloe, had shed some light on where they both stand at present. She revealed how she relied on her family instead of Tristan during the surrogacy.

In addition, the reality star shared she still wants her baby daddy to be in their kids' lives. The exes were also seen sharing a moment together after the birth of their son in an episode of The Kardashians.

To conclude, Thompson has been accused of cheating on his baby mama several times, some of which have proved true. Nevertheless, the ex-pair seems to have moved on. If Thompson leaving with the entertainment model is any indication, he appears to be open to dating new people again. Hopefully, we will learn more about his love life in the coming days.