While F1 is considered the peak for race car drivers, MXGP is the advanced level for motocross athletes. Many shed blood, sweat, and tears to reach MXGP. Joining them is Vsevolod Brylyakov, a Russian professional motocross rider, who has been competing in the Motocross World Championship since 2013.

Although not a new name in motocross racing, Brylyakov only made his MXGP debut in 2019. He has since established a strong foothold in the division and has been delivering exceptional results all along. So, without further ado, allow us to take you through this brief biography of Vsevolod, which will quench your curiosity about his upbringing, racing career, and even love life.

Involved In Motocross Since A Young Age

Like most of the racing athletes, Vsevolod also had an early start in his racing journey. He started off by competing in his homecountry and quickly made his international debut after a few years. Moreover, the young gun showed potential from the very beginning as he won his first title at the age of ten.

Seva, as he is known among his friends and team members, has won multiple Russian motocross championships, as per TMX. In fact, one Kawasaki article even called him the "beast from the east." From racing in local circuits, the rider moved to compete in the MX2 class in 2013. He raced in fifty-four tracks in the class before advancing to MXGP class with JMR Yamaha Racing in 2019.

The MXGP racer has been working very hard to reach where he is at today. His journey in the motocross has often been halted by injuries, but he has made a strong comeback each time. His vigor and passion for the sport have landed him sponsors and a racing team every time he returned from a hiatus.

Vsevolod Brylyakov Net Worth And Career

Motocross is dangerous but not without its benefits. Along with risks comes fame and the riders are also not disappointed with their paychecks. Likewise, the Russian sportsman must have earned significantly, having been actively racing for almost a decade now. Hence, Vsevolod Brylyakov's net worth is heavily influenced by his motocross racing career.

As mentioned earlier, the biker started competing in Motocross World Championship in 2013. He made his MX2 debut in the 2013 GP of Netherlands with Honda. Afterward, he continued with the team to race in Trentino, Sweden, Latvia, Finland, and other tracks the same season.

The motocross rider switched to the Kawasaki team in the 2016 season and raced with them till the 2017 season. Similarly, his best result in MX2 class was finishing in fourth place in the 2015 GP of Sweden and the 2018 GP of Trentino. Furthermore, Vsevolod is currently racing for the JWR Honda Racing team, which he joined in the 2021 season.

The average annual income of a motocross athlete is estimated to be $85,000, so Vsevolod Brylyakov's salary must also be around a similar range. Besides, his earnings also benefit from his sponsors, CTi Kneebraces, Raven Sports, TCX Boots, etc. He is also a brand ambassador of Cross Coffee Roasters.

Thus, Brylyakov must have earned considerably from his motocross career. You might also be interested to learn about Hardi Roosiorg, whose racing story is equally inspiring.

Is The MXGP Racer Dating Anyone?

Being famous in whichever field has its own pros and cons. While you will receive the support and love of many fans, you will also be subjected to constant invasion of privacy. Similarly, Vsevolod has won the hearts of many motocross followers who are eager to unravel everything related to him, including his love life.

So, searches regarding Vsevolod Brylyakov's girlfriend popping up on the Internet is nothing new. Sorry to disappoint the rider's fans, unfortunately, he has remained silent regarding his dating status. He has never talked about his love interest or partner in any of his interviews as of now. 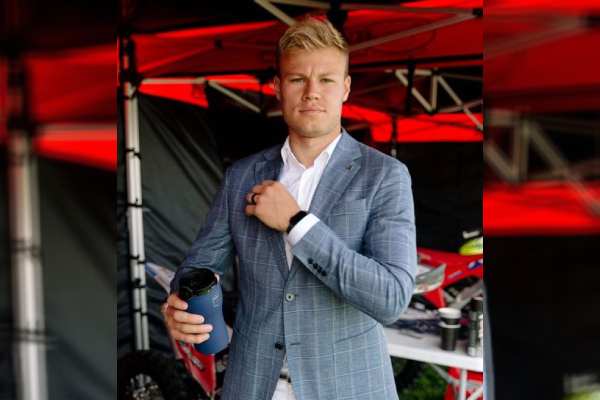 Moreover, the Russian athlete's social media handles also don't hint at his relationships. Instead, he mostly posts about his races and achievements. He does seem to enjoy hanging out with his friends, going through his IG posts. All in all, whether Brylyakov is single or taken remains a mystery for now. Hopefully, he will shed light on the matter in the future.

By now, most of you must have realized that the MXGP racer is a secretive person. Born on April 25, 1995, in Russia, Vsevolod Brylyakov's mother is Lara Brylyakov. He also has a sister, but information about her and their dad remains scarce.

The biker once revealed how his father taught him there are no names at the track. The latter advised him to like other racer's styles until he himself reached the pro level. Afterward, it will be how Vsevolod will perform, his style, and how others will look up to him. In addition, he hasn't disclosed about his educational background.

All in all, Brylyakov has moved on from being a Russian motocross champion to representing his native country at the international level. Sadly, he had his license withdrawn after the FIM issued a ban on Russian competitors in March 2022. Nevertheless, his well-wishers are eagerly looking forward to seeing him compete in the Motocross World Championship. Hopefully, it will be soon.