Jacob Davich is an actor who starred in The Adventures of Sharkboy and Lavagirl 3-D. Image Source: Jacob Davich Instagram.

The Adventures of Sharkboy and Lavagirl is a popular American 3D superhero adventure film that was released in 2005. It stars George Lopez, Taylor Lautner, Cayden Boyd, David Arquette, Taylor Dooley, and Kristin Davis. Furthermore, Jacob Davich is also one of the actors starring in the movie.

Jacob's character is Linus/Minus, who bullies Max, the film's protagonist. Following the movie's success, Davich has acted in several other films and series. Moreover, he is also involved in the music industry. As he rose to fame due to his roles, many might wonder what he is doing now. So, in this biography, let's know more about Jacob Davich and his journey as an actor and musician.

One Of The Three Children Of His Parents

Jacob was born Jacob Daniel Davich on August 28, 1990. He was welcomed by Martin Davich and Carrie Davich. He grew up in Los Angeles, California, with his sisters, Hannah Davich and Laura Davich. Jacob must have had fun times growing up with his siblings. They share a close-knit bond, and his sister, Laura, often shares adorable pictures of the three of them. 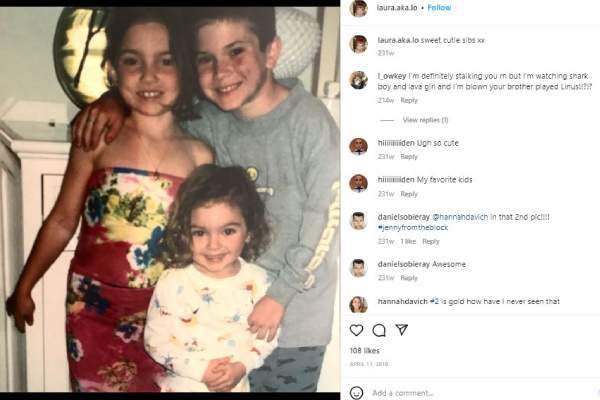 Jacob Davich's father is an Emmy Award-winning television and film composer. He is famous for his works in ER, Third Watch, Days of Our Lives, Beverly Hills, 90210, and others. On the other hand, Jacob's mother has a home decor and gifts shop.

Talking about his educational background, the artist went to The Waverly School. He graduated in 2009. However, it is unknown which university he went to or if he put a full stop to his education.

What Is Jacob Davich Famous For?

Being born to an Emmy Award-winning composer, Jacob might have gotten intrigued by the entertainment industry from a very young age. At the age of 12, he starred in his first-ever acting project.

But what made Davich famous was his role as Linus/Minus in The Adventures of Sharkboy and Lavagirl 3-D. He gained international prominence because of his performance.

As a result, the young guy further went on to get cast on different other projects, which might have helped him earn massively. So now, let's get to know how much Jacob Davich has earned to his name from his acting and music career.

Jacob Davich Net Worth And Career

As mentioned earlier, the California native's first ever acting job came when he was 12. He made his acting debut in the television mini-series Taken, where he portrayed multiple characters. Two years later, in 2004, he starred in The Adventures of Sharkboy and Lavagirl 3-D and then went on to work on several other shows.

Likewise, take a look at the following table showing a few movies that the Los Angeles-born actor has starred in and their box office collections.

Besides these movies, Martin Davich's son has also acted in some television series such as Without a Trace, The Unit, Whitney, Shameless, and All Night. He must have made considerable earnings from all these acting projects. However, Jacob, who has ten acting credits on IMDb, does not seem to have acted since 2018.

Apart from acting, the former child actor is also involved in the music industry. He has released several tracks, which are included in The Jacob Davich EP. Furthermore, he also teaches guitar. Additionally, he performs at several events and acoustic shows.

A musician earns $45,855 a year on average, while an actor makes $59,469 annually. So, Jacob seems to be earning significantly, thanks to his acting and music endeavors. While the amount remains a mystery, it can be assumed that Jacob Davich's net worth must be a commendable sum.

Another person who worked in The Adventures of Sharkboy and Lavagirl is Rico Torres.

Who Is Jacob Davich's Girlfriend?

Following his acting and musical venture, Jacob came into the limelight. People must be wondering if he has someone special. Sadly, the Waverly graduate's love life remains a mystery. He has not talked anything about his relationship and has neither posted.

Thus, for now, information about Jacob Davich's girlfriend is little to none. But, we hope he soon reveals more about his lady love. Whoever is dating or will date him in the coming days will be a lucky woman.

Nonetheless, Davich must be making his parents proud. He must be working hard to establish himself in the industry. We wish him good luck with that. We hope he has a successful career and harmonious days ahead.