When it comes to women in MMA, beauty and strength coexist, and Holly Holm is a name that fits this statement. Born Holly Rene Holm, she is a former professional boxer with a remarkable record of 33-2-3. She is termed one of the greatest female boxers of all time. Afterward, Holm decided to broaden her horizon and entered the MMA scene. As such, she also holds a UFC record of 14-6-0.

To know everything about the GOAT Holly Holm, including her career, relationship, and net worth, keep on reading this short biography of hers.

Grew Up In A Loving Family

The UFC fighter was born in Albuquerque, New Mexico, on October 17, 1981. She is the youngest child of Roger Holm, a Church of Christ preacher, and her mother, Tammy Berdy, a masseuse. She has two older siblings, Brian Holm and Weston Holm.

To this day, Holly Holm's parents have always shown their immense support towards her career choice. Roger has never missed Holly's match and has always supported her from the corner. As a mother, Tammy finds it challenging to see her daughter get hit, but she is supportive nonetheless. Similarly, Holly's brothers, Brian and Weston, are her biggest fans and are always rooting for her. Getting so much love and support from her family must have been a huge source of strength for the lady fighter.

Holly's father and mother got divorced when she was a senior in high school. Despite being separated, they remained steady parental figures in her life. When asked if Roger, being a preacher, ever had a problem with his little girl's career choice, he said none of his kids ever held back from anything, and he has always been a supportive father. Because of her dad's profession, Holly is nicknamed "The Preacher's Daughter."

Talking about the sportswoman's education, she graduated from Manzano High School. She then attended the University of New Mexico for a year.

The lady fighter had her beginning in the boxing and kickboxing sector. She competed in numerous matches and secured a boxing record of 33-2-3. Then, on March 4, 2011, Holm made her MMA debut against Christina Domke and won the fight via technical knockout. She again won her second bout against Jan Finney by TKO.

The ABQ native made her Bellator debut against Katie Merrill on February 28, 2013. Considering her involvement in MMA, she decided to quit boxing after her match against Mary McGee. She made her honorable exit from boxing by defeating McGee.

On July 10, 2014, UFC announced five fights contract with Holly. It also raised several questions about whether or when she would challenge the then-undefeated bantamweight champion, Ronda Rousey. Holm's manager, Lenny Fresquez, answered that she would fight a couple of fights before taking on the champ.

The most awaited bout between Rousey and Holm happened on November 14, 2015, in UFC 193. To everyone's awe, Holm defeated Rousey via knockout and became the first fighter to be a UFC and boxing champion. The brawl was exhilarating, and the new champ was awarded a $100,000 bonus for the "Fight of the Night" and the "Performance of the Night." 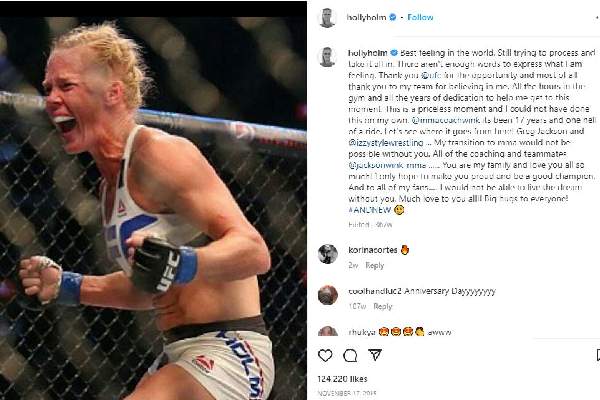 Holly Holm became the first woman ever to be a UFC and boxing champion after defeating Ronda Rousey. Photo Source: Holly Holm's Instagram.

The aforementioned bout might have upset many fans, but it earned Holly much more recognition to the extent that her hometown, Albuquerque, declared November as "Holly Holm Month." But the champion couldn't defend her title against Miesha Tate in her next fight.

Holm has been in the field of combat sports since 2002 and still thinks there's so much left. She has been in numerous bouts and has earned a lot of money as well. Hence, according to Celebrity Net Worth, Holly Holm's net worth is $4 million. She has made notable earnings from her boxing and MMA career.

As already mentioned, Holm is currently competing in the UFC and has headlined several bouts. She has also earned notable prize money from the matches. The table below shows some of Holm's earnings from a few of her UFC matches.

In addition, Holly's official website also sells merch like tees, caps, hoodies, and tank tops. This, too, contributes to her earnings. She has also landed endorsement deals with EatFit By Nohime, HoneyMed Honey, Hyperice, etc. These brand endorsements must pay her a hefty amount. Looking at her various earning sources, it's no surprise that Holly's fortune is in multi-millions.

In 2012, Holly married Jeff Kirkpatrick in Cancun​​, whom she met at the University of New Mexico. The then-pair led a private life and mostly kept their marital life under wraps. However, after six years, the former couple decided to call it quits and go their separate ways. It is said that the ex-duo separated back in March of 2018 and were no longer living as a husband and wife.

Holly had changed her legal name to Holly Holm-Kirkpatrick after her marriage. So she asked for the judge to restore her maiden name, "Holly Holm," after their divorce. Since the former couple had no children together, there was no problem regarding child support. And also, as self-supporting adults, both parties didn't bother with spousal support. Hence, there was no drama involved when it came to the UFC fighter's separation, it was a clean end to her married life.

At present, it doesn't look like Ms. Holm is romantically linked with anyone else. Looking at her Instagram posts, she looks happy and is seen having a balanced professional and personal life. On the other hand, Holly Holm's ex-husband doesn't seem to be active on social media. He definitely likes to keep his life private.

To conclude, Holm is unlikely to make a comeback in 2022 but is most likely to return to Octagon in 2023. The date is yet to be confirmed for her upcoming match. Fans eagerly await Holm's return; when she does, it sure will be a sight to see.