Miesha Tate is a renowned MMA fighter who has competed in many matches. Image Source: Miesha Tate Instagram.

Women have advanced significantly in many facets of life in the past century; there can be little doubt about that. Today, women are able to hold jobs, own assets, and participate in professional sports. They can compete in sports, once a relic of male dominance; there is now room for women in that industry.

Similarly, today, we will be talking about yet another strong-headed woman who has created an enormous amount of name and recognition in the history of MMA. She is Miesha Tate, an American professional mixed martial artist who currently competes in the Ultimate Fighting Championship (UFC). She is the former UFC Women's Bantamweight Champion and exudes charisma and fierceness in the arena.

Miss Tate is fascinating even when she isn't competing. Hence, through this piece, let's get to know the fighter better.

The prolific fighter was born Miesha Theresa Tate on August 18, 1986, in Tacoma, Washington, United States. She was welcomed into this world by her mother, Michelle Tate, and her father. Unfortunately, Miesha's parents have separated, and she was raised by Michelle and her husband, Robert Schmidt. Furthermore, the sports persona grew up alongside her sister, Felicia Martin, who opted against a fighting career and is involved in the modeling field.

When Miesha was younger, she was a tomboy who frequently played on the playgrounds in her neighborhood with the boys. When she was a Franklin Pierce High School student, she looked for a sport to play and ultimately decided on amateur wrestling over basketball. From her freshman year until graduation, she competed in wrestling for the guys' squad.

Tate participated in the girl's state championship during her senior year in 2005 and won the title. Later, Tate attended Central Washington University, where her friend encouraged her to join the MMA club with her. There were a bunch of wrestlers, and it was where she felt she truly belonged.

Miesha's first amateur bout was in March 2006, where she fought against a Muay Thai specialist, Elizabeth Posener. Before turning pro, the Tacoma native amassed a 5-1 amateur record in MMA. Then, at the one-night HOOKnSHOOT Women's Grand Prix in November 2007, Tate made her mixed martial arts professional debut. She won over Jan Finney via decision, but Kaitlin Young, the ultimate tournament champion, head-kicked her out of the match later that evening.

Following Strikeforce's fold, Miesha joined the Ultimate Fighting Championship (UFC) in February 2013. She had her first UFC fight against Cat Zingano on April 13 at The Ultimate Fighter 17 Finale, and despite winning the first two rounds, she lost in the final round by TKO. Afterward, Tate competed in many bouts in the promotion. Now, let's look at some of Miesha's UFC wins alongside the prize money she received.

Although the fighter was doing great in UFC and had been involved for over a decade, she decided to retire from MMA in December 2016. Then, Miesha joined ONE Championship on November 7, 2018, as a Vice President. However, the Tacoma native left the position in 2021 and announced on March 24, 2021, that she would return to compete in MMA.

The sportswoman's first match after retirement was against Marion Reneau at UFC on ESPN: Makhachev vs. Moises on July 17, 2021. Miesha won the fight via third-round TKO and received her second Performance of the Night award in her UFC career, thanks to this victory. Furthermore, her latest bout was against Lauren Murphy on July 16, 2022, at UFC on ABC 3, which she lost via unanimous decision.

Nonetheless, Miesha had a few ups and downs in her professional career, yet she stands firm. She has done exceptionally well in many matches and earned big prize money. As such, Celebrity Net Worth estimates Miesha Tate's net worth to be a massive $6 million. Hence, we believe she lives a comfortable life with her well-earned fortune.

Earning From Other Sources

Apart from fighting, Miesha also earns from different multi-media appearances and sponsorships. She has appeared in Fight Life, an award-winning mixed martial arts documentary. Furthermore, Tate joined the cast of the film Fight Valley, which follows female fighters in an underground fight club.

In addition, Tate also appeared on the December 2013 cover of Fitness Gurls magazine, where she was labeled the most beautiful woman in MMA. Later, she joined NASCAR driver Kevin Harvick's KHI Management firm in 2014, becoming only the second MMA athlete (after Donald Cerrone) to do so. Following that, Tate secured deals with Budweiser and NASCAR.

Moreover, Miesha is also the winner of the third season of Celebrity Big Brother, where she won four Head of Household challenges. She also cashed $250,000 prize money. Overall, from all these multi-media appearances and sponsorships, Miesha must have earned enormously.

Alongside sharing a prosperous professional career, the Tacoma native is blessed with a happy marital life. Miesha Tate's husband is Johnny Nunez, a fellow MMA fighter. The pair began dating after her MMA retirement in 2016; before that, the two were just teammates at Xtreme Couture. Their chemistry is beyond perfect, and they were always meant to be together.

Moreover, the fighter officially announced on January 1, 2018, that she was in a relationship with Johnny, and they have been together ever since. In addition, Miesha Tate's partner is exceptionally loving and supportive; he also proposed to her in May 2021 to make her feel special. 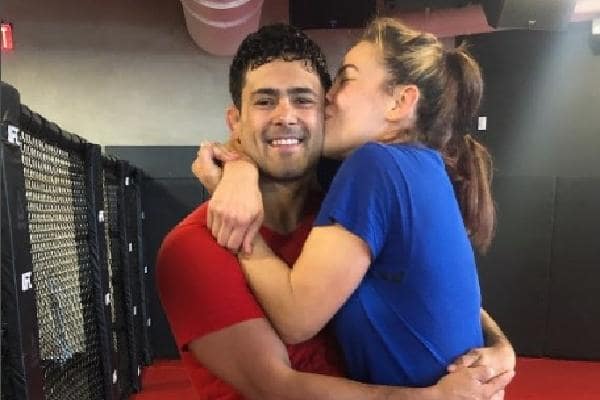 Although the wedding details of the fighting pair have not been revealed yet, there is no doubt they share a beautiful, strong, and compassionate relationship. We hope their love will endure every storm.

A mother's love is giving, kind, and selfless. She sees no flaws in her children and will do everything she can to provide them with the best things in life. The Celebrity Big Brother star is also a loving and devoted mom of two children. Alongside her husband, Johnny, the duo first became parents with the arrival of their daughter, Amaia Nevaeh Nunez, on June 4, 2018.

Later, Tate announced on December 25, 2019, that she was pregnant with their second child. Consequently, she gave birth to their son, Daxton Wylder Nunez, on June 14, 2020.

The power couple provides their two lovely kids with unwavering attention, affection, and pampering. They are excellent parents, and we can tell through the couple's social media posts that the family of four is content, laughing, and loving one another. Besides, since Miesha Tate's children are still young, it will be exciting to see if they will follow in her footsteps. We will have to wait a while before it happens.

All in all, the Tacoma native is a wonderful mother and an excellent partner, apart from being a fantastic fighter. Tate is a role model for many aspiring fighters all over the world due to her impressive MMA background. We wish Miesha success in all of her future activities and wish her luck in everything she undertakes.