Women with the talent and determination to be leaders and make a difference still encounter obstacles that do not necessarily apply to their male counterparts. However, we enjoy the kind of access to new chances that people from previous generations could never have imagined.

One inspiring woman from this generation that we will discuss today is Mackenzie Dern, who is an American professional MMA fighter and Brazilian Jiu-Jitsu practitioner. Although she has been compared to Ronda Rousey by some, the young fighter is carving out her own identity in the world of mixed martial arts.

Mackenzie might be relatively new to the MMA scene, but she is here to stay and is working hard to achieve her goals. She is definitely somebody to watch because she is quickly moving up the ranks. Hence, here are some interesting facts you didn't know about this promising fighter.

She Is The Daughter Of A Renowned Fighter

The exceptional fighter was born Mackenzie Lynne Dern on March 24, 1993, in Phoenix, Arizona, U.S. She was welcomed into this world by her father, Wellington 'Megaton' Dias, and her mother. Miss Dern comes from a family of fighters, and she was trained by her dad and step-mom, Luciana Tavares Dias, who is also a black belt holder.

Dias has been Dern's biggest supporter ever and was her first coach from the start. We can understand why Dern cites her dad as her most significant source of motivation. Mackenzie and her father share an unmatched commitment to one another and their respective fields of expertise.

Started Fighting At A Young Age

As mentioned earlier, Mackenzie used to practice alongside her father and stepmother, both fighters, and she started training by age three. When she was just 14 years old, Mackenzie started competing in the adult divisions. Moreover, the Phoenix native's black belt rank was presented by her father in December 2012, three months before her 20th birthday. While advancing to black belt rank, she had won a World Championship at every belt level.

Dern finished in 1st place six times at the Asian Open and became the only female Jiu-Jitsu competitor to do so at the black belt level. During her BJJ days, she managed to defeat Gabi Garcia despite a considerable weight difference, being one of the few women to do so, and this is also one of her most significant achievements.

Mackenzie Is Known For Her Ultimate Fighting Championship Career

The mixed martial artist made her MMA debut on July 12, 2016, at Legacy FC 58 against Kenia Rosas, and she won the bout by unanimous decision. Similarly, she also fought one match at Invicta Fighting Championship on December 8, 2017, against Kaline Medeiros, which she won via an armbar in round three.

Afterward, Mackenzie moved towards UFC, made her promotional debut on March 3, 2018, against Ashley Yoder, and won the fight via split decision. Now, let's look at some of Dern's UFC wins alongside the prize money she received.

The UFC competitor's latest match was against Yan Xiaonan, which she lost in October 2022. Nevertheless, her supporters must be looking forward to her next match. Furthermore, as per her UFC profile, Dern's UFC record is 12-3-0. As she has won many bouts, we can expect Mackenzie Dern's net worth to be significant.

She Has Separated From Her Ex-Husband

It's difficult to let go of someone who has supported you through good times and bad. Even when it's for the best, it hurts to let go. Marriages are said to build lives, while divorces destroy every little foundation. However, sometimes it's okay to end a relationship while you both have grown apart.

Similar is the case with Mackenzie and her former hubby, Wesley Santos, who separated in 2022. Although the couple has now parted ways, they are still excellent friends, and the fighter wishes the best for her former partner. Besides, there have been no details regarding why the ex-pair separated, and we should completely respect their privacy. 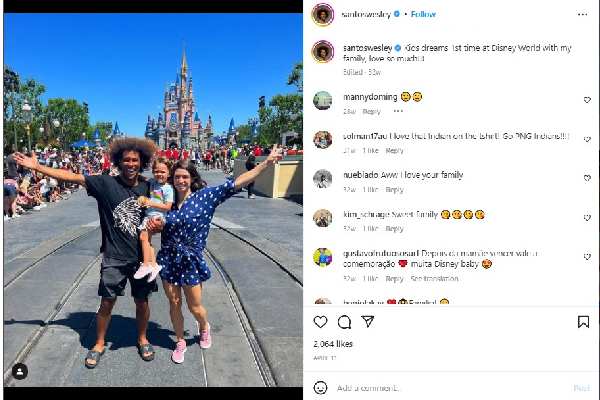 Moreover, Mackenzie Dern's ex-husband, Wesley Santos, is a former WSL South American Pro champ and a professional surfer. His professional career started in 2011, and he has participated in several competitions since then. Nonetheless, we hope the former duo is doing well in their respective fields.

Mom To An Adorable Daughter

Apart from being a successful fighter and a loving daughter, Mackenzie is also a caring mother who loves her child with all her heart. The MMA fighter, alongside her former partner, Wesley, welcomed their lovely daughter, Moa Dern Santos, on June 9, 2019. Dern suspended her MMA career due to pregnancy in February 2019.

Furthermore, the lady fighter is a wonderful mom who embraces her motherhood. Mackenzie Dern's daughter is still young and growing up; hence it is too early to talk about her professional career. Still, it will be interesting to watch if Moa will follow in her mother's footsteps. We hope she will grow to be a strong lady like her mom.

All in all, the Phoenix native is a wonderful mother and an amazing human being, apart from being a fantastic fighter. She is a role model for many aspiring fighters worldwide thanks to her impressive MMA resume. We wish Mackenzie luck in her future endeavors and hope that she is successful in everything she sets out to do.