Being a prominent figure in Hollywood is never easy as the actors and actresses put forth tremendous effort, dedication, and sacrifice to succeed. Even though it is fiction, the actors do an excellent job of bringing the characters to life. Because of this, we admire and idolize numerous superstars.

Similarly, in today's article, we will talk about yet another actor who is hardworking, dedicated, and passionate about everything he does. He is Ser'Darius Blain, a Haitian-American television and film actor who is widely recognized for his portrayal of Anthony 'Fridge' Johnson in the film series, Jumanji, featuring in the third and fourth entries.

There are several different facts about Ser'Darius to unveil; hence keep scrolling through this short biography to the end.

Was A Shy Kid

The prolific actor was born Ser'Darius William Blain on March 10, 1987, in Miami, Florida, United States. He was welcomed into this world by his father and his mother, Regina E James. Ser'Darius was raised by loving and supportive parents who always believed in his dreams.

Furthermore, the Miami native started acting at 12 when he helped his mom rewrite the script for a school play. Blain's mother, Regina, was a middle school drama and English teacher, and she featured her son in the lead role. Besides, growing up, the Jumanji actor was shy and used to cling and hide behind his mom as a little boy.

Not just a good son, Blain is also a loving brother to Serge Blain. The siblings are incredibly close to each other and are thriving in their individual lives.

Talking about his educational background, the actor attended New York Conservatory for Dramatic Arts because his girlfriend convinced him in 2007. While studying there, he encountered his agent DebraLynn Findon.

Ser'Darius Blain Net Worth And Career

Ser'Darius worked his way through the acting ranks until landing a breakthrough part in Jumanji: Welcome to the Jungle (2017). After pursuing Dramatic Arts, he made his acting debut portraying a fighter in Sucker Punch, Ryan Gould's short film. Furthermore, Blain stepped into features with a role in the remake of Footloose as Ren's friend, Woody.

The Miami native's other supporting role came with the young adult series Jane by Design. He has also made guest appearances on The Vampire Diaries, NCIS, and Super Fun Night. Likewise, in the Kristen Stewart movie Camp X-Ray, he portrayed a role of a soldier who works in Guantanamo Bay. Later, Blain made a cameo as a high school football player in the inspirational sports film When the Game Stands Tall with Jim Caviezel and Laura Dern.

Apart from this, the actor returned to television with a recurring part in Survivor's Remorse and guest appearances on Shameless and Chicago P.D. He had supporting parts in Seduced (2016) and Maybe Someday (2017) before Jumanji, which was his breakout performance.

After the big-budget success, Ser'Darius joined the cast of the newly revived supernatural drama Charmed and received appreciation and respect. Besides, the actor's recent movies include Beneath the Leaves, Bolden, The Last Full Measure, Jumanji: The Next Level, American Underdog, and Fortress. Now, let's look at some of Blain's movie's box office earnings.

Overall, the table above shows that the Charmed actor has been a part of some commercially successful projects. As a result, we can deduce that Ser'Darius likely received his fair share after starring in those projects. Additionally, an American actor makes $70,644 on average annually. Hence, Ser'Darius Blain's net worth must be of notable amount. Therefore, we hope the artist lives comfortably with his well-earned fortune.

A Father's Love Is Faithful

Ser'Darius is successful and established, and there is no doubt about that. Also, he is a kind, giving, and faithful dad to Elijah Blain. The actor welcomed his son in June 2015 and has been raising him with unconditional love, support, and dedication. 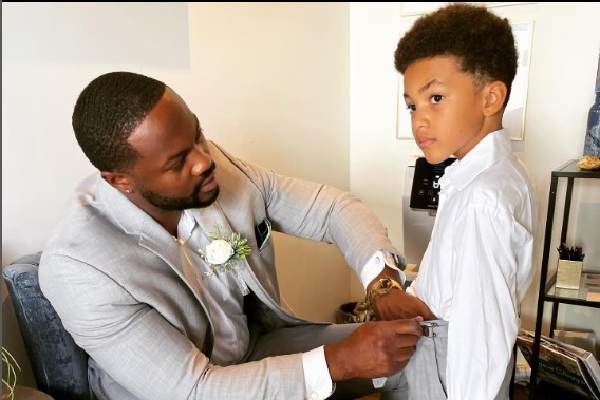 Blain takes his little man to football matches, his premiere shows, and everything in between. Their bond is exceptionally close and can also be reflected through his social media sites. Besides, Ser'Darius Blain's son is very young and growing up; hence it will be too early to talk about his professional career.

Many people are curious to find out about Ser'Darius Blain's partner. Also, it has not been revealed who Blain's baby mama is. Unfortunately, the actor has never been upfront regarding his life's romantic aspect, and we should completely respect his decision. However, as per several sites, the Miami native has been rumored to be dating actress, writer, and producer Isadora Ortega. Still, confirmation from both parties has yet to be done.

Overall, Blain is a talented actor to keep an eye on. He has been in the industry for a long time and accumulated significant experience. So far, Ser'Darius has acted professionally on 45 different projects. Even though he is in his early 30s and has experienced a lot, there is still much more to discover about him.

We believe that this is just the start of an even better career in the years to come because Blain is continuously getting excellent roles in movies and television shows. Although he hasn't yet achieved superstar status, he certainly seems to be headed that way.