It's so empowering and phenomenal to watch women create history in the fighting world. Of course, they have to survive several real-life battles, but women taking the lead in the Ultimate Fighting Championship and martial arts field is very inspiring. Likewise, this article will discuss some interesting facts about Michelle Waterson, who has inspired millions of people to follow their dreams and never give up.

An American mixed martial artist and model, Michell competes in the Ultimate Fighting Championship (UFC). She was previously the Invicta FC Atomweight Champion, and when she's in the ring, she looks charismatic and fierce. Even when Miss Waterson is not competing, she is just as fascinating. Hence, get to know the fighter better through this piece.

She Grew Up Alongside Two Siblings

Michelle was born Michelle Eileen Waterson on January 6, 1986, in Colorado Springs. But, she was raised in Aurora, the U.S. Her mother, Metta Waterson, is Thai, and her father is American, so she is of Thai and European descent. The fighter shares a tight-knit bond with her parents and is extremely close to them.

Likewise, Michelle is a loving and proud sister of Shanna Waterson and Max Jonjit. Her sister and brother both have a balanced personal and professional life. The Waterson siblings are very fond of each other and always support one another.

Was A Contestant On A Reality Show Called Fight Girls

After graduating from high school, Michelle began pursuing her modeling career in 2004 and only realized her dreams of becoming a fighter when she was in the uni. Besides, the Colorado native's interest in Gymnastics led her to take Karate classes at a young age. Waterson is an American Freestyle Karate black belt who has also learned Muay Thai, Wushu, Brazilian Jiu-Jitsu, Wrestling, and Boxing.

Apart from this, Michelle rose to prominence as a contestant on the Oxygen television network's Muay Thai-themed reality show Fight Girls. In addition, Waterson appeared as a fighter in the MTV/MTV2 reality show Bully Beatdown.

She Is Known For Her Ultimate Fighting Championship Career

The mixed martial artist made her MMA debut on 16th February 2007 at Ring of Fire 28: Evolution against Andrea Miller and won by unanimous decision. Also, Waterson had not previously competed in any amateur fights.

On December 1, 2007, she faced Lynn Alvarez, a Freestyle Cage Fighting champion at Ring of Fire 31: Undisputed, but lost by submission in the first round. Following that, Michelle participated in several promotions, including Strikeforce, Invicta Fighting Championships, and more. Afterward, the fighter signed with UFC on April 28, 2015, and made her promotional debut on July 12, 2015, against Angela Magana.

Now, let's look at some of Michelle's UFC results.

The UFC competitor's latest match was against Amanda Lemos, which she lost. Nevertheless, her fans must be eagerly awaiting her next fight. Moreover, as per her UFC profile, Michelle Waterson's UFC record is 18-10-0. She has won three matches by knockout, nine by submission, and has eight first-round finishes. As UFC is noted for its big prize money, she must have also earned considerably from her wins.

Has Released Her Merch

Waterson does not just earn from her fighting career but also from the sales of merch that she has launched. Now, let's look at some of her products alongside their price.

Overall, we can deduce that Michelle Waterson's net worth is significant since she has a spectacular fighting career and from her merch sales. We hope she leads a comfortable lifestyle from her hard-earned fortune and that her income will increase in the coming years.

Her Husband Is A Former U.S. Armed Forces Boxing Champion

Since Michelle's professional career is so successful, many of her fans are drawn to her personal life and want to know if she has already found the love of her life. Well, to break the ice, the fighter is happily married to her beloved partner, Joshua Gomez.

The lovebirds exchanged wedding vows in July 2011 at a private ceremony, and they have been together for several years. Although their wedding was intimate, it was beautiful. Furthermore, Michelle Waterson's husband, Joshua, is a former U.S. Armed Forces amateur boxing champion who is currently working in the finance sector. He co-founded my moment apparel with Waterson in 2020. 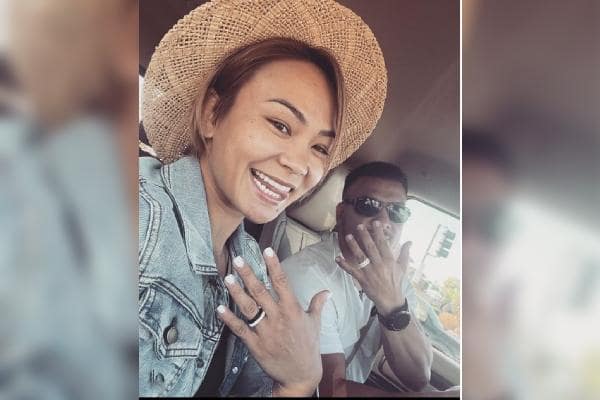 Michelle and her partner both have a fighting spirit, and it's natural to assume that their professions in combat sports brought them together. Overall, Michelle and Joshua both have a thriving and beautiful marriage, and we hope they will stay together forever.

She Is A Doting Mother

Not just a loving wife, Michelle Waterson Gomez is equally a devoted and kind mother to Araya Waterson. The fighter, alongside her husband, Joshua, welcomed their child into this world on March 18, 2011. Similarly, Waterson announced her pregnancy on September 16, 2010, before they married.

Michelle Waterson's daughter, Araya, is an adorable baby who has never missed one of her fights. She is always there to look after her mother and cheer for her. On the other hand, Michelle feels that her little girl is the most powerful force behind her.

Nonetheless, the Gomez couple is raising their only child with unconditional love and nurture. And it will be interesting to watch if little Araya will follow in her mother's footsteps in the coming days.

All in all, the Colorado native is a wonderful mother and a dedicated partner, apart from being a fantastic fighter. Her excellent MMA resume has made her a role model for many aspiring fighters worldwide. We wish Michelle the best of luck in her future bouts and hope she succeeds in everything she attempts.