Seeing women make history in the fighting world is inspiring and incredible. Of course, they must endure many real-life fights but seeing women lead in the Ultimate Fighting Championship, and other promotions is really inspirational. Likewise, today through this piece, we will talk about an American mixed martial artist and model competing in UFC, Michelle Waterson, and her daughter, Araya Waterson.

Though it's normal for a child to look up to their parents and follow in their footsteps, it will be interesting to witness if the fighter's little girl will also follow in her lead. If you are one in the crowd interested in learning more about Michelle Waterson's daughter, this article revolves around her, so stick with us till the end.

Her Parents Got Married In 2011

Araya was welcomed into this world by her loving mother, Michelle Eileen Waterson, and her kind father, Joshua Gomez, on March 18, 2011. She is being raised in the U.S. by highly loving parents. Her mom is the former Invicta FC Atomweight Champion and was ranked the world's No. 1 women's atomweight fighter between 2013 and 2014. As of November 2022, in the UFC women's strawweight rankings, she is #11.

On the other hand, Araya Waterson's father, Joshua, is a former U.S. Armed Forces amateur boxing champion who is now employed in the finance sector. Furthermore, her parents tied the wedding knot in July 2011 at a private ceremony; they have been together for many years. Even though their marriage was intimate, it was beautiful. The couple also has together co-founded my moment apparel. 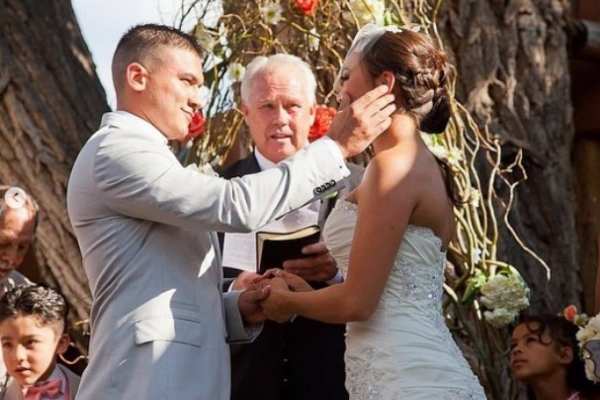 Since both Michelle and her partner have a competitive nature, it stands to reason that their shared love of combat sports brought them together. Overall, the family of three is leading a beautiful life together, giggling and loving each other. Now, let's learn more about Michelle Waterson's daughter.

The junior Waterson is known because of her strong-headed, fighting mother, but she also came into the headlines after getting viral on her mama's social media. In the video, Araya made a sales pitch to UFC president Dana White, requesting him to help her achieve her target of selling 2,000 boxes of Girls Scouts Cookies.

In the video, Araya mentions herself as the 'boss of girl scouts' and asks Dana to help her. White agreed to buy 1,000 boxes and posted the video on his Twitter, bringing Araya halfway to her objective. After that video got viral, her goal of selling 2,000 cookie boxes got accomplished, and in addition, author Tony Robbins also bought another thousand boxes of cookies.

Of course, Araya Waterson's mother deserves most of the credit for helping. Not just for posting her daughter's pitch on her Instagram page but also for her and her husband Joshua trying their best to teach their child morals.

Michelle is a wonderful mother to Araya, and the mom-daughter duo is exceptionally close to each other. They love each other with everything they have, and the chemistry they share is out of the world, which can also be seen on their Instagram handles.

Michelle is a brave fighter and a committed mother, these two titles, she is grateful to hold in and out of the MMA cage. She has a sizable fanbase, including her only daughter.

Waterson takes her child, Araya, with her to every fight. Many people heavily criticize the fighter for exposing a young kid to violence by bringing her along to every bout. However, Michelle vigorously tries to break the stereotypes and says she is just trying to show Araya the artistic side of fighting.

Furthermore, in an interview with People, the UFC fighter mentioned that martial arts is an art at the end of the day, and that is what she is trying to teach her child at a young age. Fighting is subject to numerous misconceptions, including that it is brutal and vicious. However, there's an entirely different aspect to it that people don't see, and she is simply attempting to dispel the myths.

In addition, Michelle mentioned that having her daughter ringside is helping for learning and growing. Also, Araya has learned many life lessons just by witnessing her mother move up the ranks, lose, win, and get hurt.

Moreover, the UFC fighter believes having her around gives her a completely different outlook on life than many youngsters get to experience. Hence, Michelle takes her daughter in all her fights to break the stereotypes of society.

It's too early to tell if Michelle Waterson's daughter will follow in her footsteps and join the field of martial arts and fighting in the long run. However, one thing that we know is that Araya is surely following her mama's values, roots, and principles. Like her mother, the young girl is hardworking and passionate about many things.

While watching her mother fight in the ring, Araya is learning how to reach for her goals and work hard at her aspirations. On the other hand, Michelle wants her baby girl to see the good, the horrible, and the ugly because that is what life is. She further adds that accidents happen, things go wrong, and unpleasant days happen.

Nonetheless, Araya is already learning about MMA, and it really fascinates her. She is also good at studying and gymnastics and has participated in several competitions. Going through her Instagram account, we can also see that Michelle Waterson's little girl is very athletic and intelligent. Nevertheless, we wish Araya the best in whatever she pursues.