Kai Stewart is one of the highly ranked BKFC fighters in the featherweight division. Photo Source: Kai Stewart's Instagram.

BKFC is said to be the largest bare-knuckle fighting promotion globally. It features many renowned talents, including Luis Palomino, Chad Mendes, Kaleb Harris, Johnny Pantoja, and more. However, it is not just a home for already-established personalities but also a haven for emerging fighters.

Here, we are talking about Kai Stewart, a small-town guy whose fighting skills have landed him among the top competitors in the featherweight division in BKFC. He carries such a mean punch that his two BKFC opponents were knocked out in the first round. Thanks to his ambitions, there is no shortage of options for this young man in the promotion.

If you want to know more about this rising BKFC fighter, keep scrolling down this biography of Stewart to get all the details.

From Wrestler To Developing An Interest In MMA

The sportsman was born in June 2000 in Liberal, Kansas, USA. But, he mostly grew up in Great Falls, Montana, and completed his schooling there. Moreover, as per his FB profile, Kai Stewart's parents are Jack Schechter and Lorrie Diacon Stewart. He also has a sister named Joni Schechter Leigh.

While at Charles M. Russell High School, Kai competed in wrestling and cross country. He even became the Montana State finalist three times. Furthermore, after suffering a loss in the state finals in his senior year, the teen was looking forward to trying something new. In the midst of this, one of his wrestling coaches approached him and suggested he make his amateur fight debut.

Though his opponent was quite tough, Stewart decided to compete. After the first fight, he fell in love with MMA. However, the Great Falls native's world isn't just centered around fighting. He is a college student at the University of Providence as of 2022. He transferred to the uni after spending his freshman year at Minot State University.

Has An Undefeated Streak In BKFC

Considering Kai's popularity in the promotion, you might be surprised to find that he only made his BKFC debut in 2021. His consequent victories within a few minutes of a match helped him quickly grasp the crowd's attention. Let's start from the beginning; Stewart won his debut match in the BKFC, making people wonder about this newbie.

The Charles M. Russell High graduate continued his momentum in his second match against Daniel Gary. He knocked the latter out with a short right uppercut in the first round. It was so fast that the viral knockout created a sensation on social media.

The BKFC competitor's other anticipated match was against Rusty Crowder. The fighters had a bout at BKFC 29 MONTANA 2, and it ended in Stewart winning via decision. The victory continued his undefeated streak in the promotion.

Kai Stewart Net Worth And Career

As mentioned in the first sub-heading, the Great Falls native fell in love with MMA fighting after his amateur debut match. He initially competed in Fusion Fight League between 2019 and 2021. Around that period, he recorded an amateur MMA record of 7-3-0.

So, let's look at some of Kai's fighting results in the following table:

Aside from fame, Kai must also be earning a good amount from BKFC. As fighters were earning $2,500 on average as of 2020, Stewart likely pockets notable prize money. Hence, Kai Stewart's net worth must be a considerable amount.

Aside from matches, Kai makes money from his merch sales. He has released several products collaborating with Brand L Creative Painting. The items list ranges from t-shirts, hoodies, to sweatshirts.

Is Kai Dating Anyone?

As much as it sounds cringey, the statement about a woman being behind a successful man is somewhat true. In the case of the Providence student-athlete, this statement is totally applicable. In fact, he has credited his partner, Dakota Rhoads, for where he is now regarding his career.

The lovebirds have been dating since June 2021. But don't let the short dating period fool you, for the duo's bond is as strong as that of long-time pairs. To give a bit of exposure to Dakota, she too is a fighter from Montana and has participated in several competitions.

Since the pair share similar fighting interests and competed in Fusion Fight League, could it be they met through work? Furthermore, going through their social media handles, we can see the Stewart-Rhoads duo's posts are full of loving captions and couple-related hashtags. While he calls himself blessed to have met his beau, Kai Stewart's girlfriend calls him her favorite person. 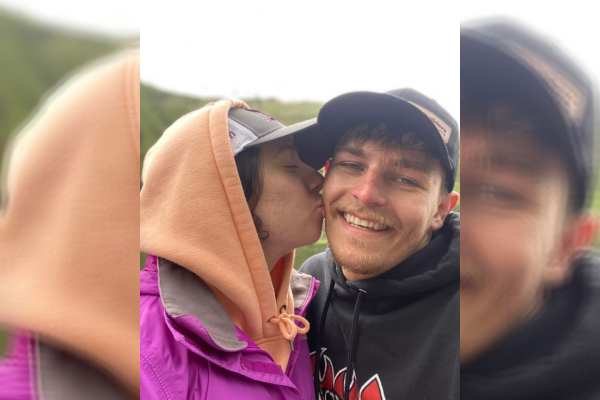 Both Kai Stewart and his girlfriend Dakota Rhoads have been dating since 2021. Photo Source: Kai Stewart's Facebook.

Hopefully, the duo's relationship will last forever. Will there even be news about them getting married in the future? Our best wishes lie with them.

Overall, Kai has risen from being a small-town fighter to competing in one of the well-known fighting arenas. As he is only a rank away from being the top featherweight competitor, we hope his upcoming matches will help him achieve that goal.