If you've been following Bare Knuckle Fighting Championship, you've probably heard of Kaleb Harris. He is a professional mixed-marital artist and bare-knuckle fighter. He currently competes in the Welterweight division of BKFC.

The fighting personality has achieved massive success throughout his fighting career. Along with his career, Kaleb's personal life has also been the interest of his fans. Thus, why don't you take a glimpse into this Kaleb Harris' biography, which includes information about his fighting career, marital life, and upbringing.

The mixed martial artist was born on September 21, 1993, in Mississippi, USA. He had aspirations to become involved in the fighting world since he was young. As a result, he started training in martial arts at the age of seven. Harris often shares his parents' photos on Instagram but hasn't revealed their names.

What Is Kaleb Harris Famous For?

Before diving into Kaleb's professional life, let's go back to understanding how he initially started his career. In his very own words, he began his journey at seven to become a Power Ranger. He has now been in the MMA scene for over two decades and is a purple belt in BJJ with a Pro MMA record of 3-1 and a BKFC record of 4-4.

Though he fought in many promotions before, Harris' popularity only skyrocketed after joining BKFC. He is known for his vicious knockout, which has made many of his opponents taste loss. In fact, he even won the Knockout of the Year award in 2019.

The BKFC fighter has also faced several losses in his career. However, his never giving up attitude and determination to show better results next time makes him more inspiring.

Likewise, Elvin Brito is another popular BKFC fighter whose fighting spirit is praiseworthy.

Kaleb Harris Net Worth And Career

The sportsman has made a good name for himself in the fighting industry. He has fought against many MMA veterans and won many matches. Alongside fame, he must have cashed notably from those events. So, now let's take a look at Kaleb Harris' net worth and earnings.

As for his pro-MMA record, according to Tapology, Harris holds a record of 3-1-0. He made his professional debut in Summit FC 24 against Trey Manley on October 10, 2017. Later, Kaleb switched to BKFC in April 2019 and has competed in eight matches and won four as of September 2022.

So now, let's take a look at some of Kaleb's BKFC results:

From the above table, we can see that the sportsperson has competed with well-renowned fighters in the BKFC. Thus, from all of these fights, he must have earned notably. Furthermore, according to sportskeeda, a fighter for a low-end BKFC match was paid $2,500 as of 2020. Yet, many of the Bare Knuckle Fighting Championship's well-known competitors claim to have received significantly more pay.

Besides, Kaleb is the co-owner and instructor at Primal MMA & Killer Bees JJ. Also, he is sponsored by Knockout Canada. This all must add to his fortune.

The 6 feet tall athlete is a dedicated and fearless fighter. While his professional career has already been established, his several well-wishers are curious about his love life. Well, talking about his relationship status, Harris is happily married to his partner, Morgan Malley.

The pair met for the first time in 2020. The BKFC fighter announced his engagement in August 2021. Finally, after two years of their first encounter, the couple exchanged their vows in September 2022. 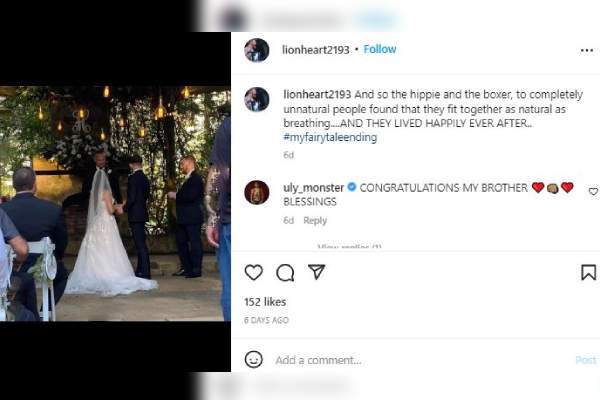 Kaleb Harris' wife is more into arts and has uploaded many of her drawings on social media. In addition, she has a separate IG profile dedicated to her artwork. The duo never hesitates to show how much they appreciate each other publicly. The love and affection between the pair is visible on their Instagram posts.

Overall, Kaleb must be enjoying a wonderful life with his newly wedded spouse. The fighter appears to have a well-balanced professional and personal life. We wish Harris the best of luck in his upcoming matches and hope he succeeds in everything he attempts.