Cat Zingano is a famous MMA fighter who has competed in many matches. Photo Source: Cat Zingano Instagram.

Cathilee Deborah Zingano, formerly Cathilee Deborah Albert, is a beauty with strength and a professional MMA fighter. She is also well known by her nickname Alpha. In a male-dominated sport like MMA, Zingano has set out to make her name and status and is continuing to thrive harder each day.

At present, Zingano ranks among the top fighters in the women’s featherweight ranking in Bellator. Check below for more details about Cat Zingano’s personal life, relationship, and present career status.

Her Childhood And Inclination To MMA

Ms. Zingano was born in Winona, Minnesota, on July 1, 1982. She has two older siblings, an older brother Shawn Albert and an elder sister Adrienn Albert. Cat is the youngest child of Jon Albert and Barbara Albert. Also, she was raised in a typical Christian household.

Zingano received her early education at Fairview High School in Boulder, Colorado, and ever since she was a child, Cat enjoyed watching World Wrestling Entertainment (WWE). Later at school, she became engaged in combat sports after joining the wrestling team. She eventually became part of the women's wrestling team at MacMurray College and the University of the Cumberlands.

Cat has been in the fighting field for almost a decade as one of the fierce and undisputedly strong contenders. According to Celebrity Net Worth, Cat Zingano’s net worth is estimated to be a whopping $2 million. It is said that Zingano could earn about $100,000 per fight, but prize money varies according to the type of matches one competes.

The former UFC fighter is a sports veteran who has been fighting professionally since 2008, and her combat style is Brazilian Jiu-Jitsu, Muay Thai, and Wrestling. Additionally, Cat had her amateur Mixed Martial Arts debut in October 2007, and as of now, she is one of the first-class female fighters to take part in the Bellator.

The Winona native made her pro-MMA debut in 2008 at Ring of Fire 32 against Karina Taylor, which she won by armbar. In 2013, she was signed by UFC. During the finale of The Ultimate Fighter 17, she won a fight against Miesha Tate by technical knockout (TKO). This infamous bout was named Fight of the Night, and Cat took home a $50K bonus.

Afterward, Cat competed in multiple fights in the promotion and cashed notable prize money. Some of her fights and earnings are tabulated below:

After six years, Zingano decided to leave UFC and step onto a new career phase by signing with Bellator in 2019, and she had been with UFC since her initial days of pursuing an MMA career. However, Cat believes it was the right decision to part ways with the promotion and move to Bellator. On October 29, 2019, Bellator MMA officially announced her signing to the team.

Since joining the promotion, the fighter has participated in three bouts and has won them all. Hence, she must have earned notably from her matches, and her income from Bellator must be adding to her multi-million fortune. Talking about Cat's lifestyle, she owns a house in San Diego which speaks volumes about her luxuries. Likewise, she appears to be living a big, fat, and well-deserved life in utmost comfort.

Was Married To A Brazilian Jiu-Jitsu Coach

The sportswoman was thriving in her profession as an MMA fighter, but we can't say the same about her married life. The MMA fighter tied the knot with a Brazilian Jiu-Jitsu coach, Mauricio Zingano, in 2010. The latter was the founder of Zingano BJJ & Muay Thai.

Unfortunately, Cat Zingano’s husband died of suicide on January 13, 2014. The reason behind his suicide is still unclear, but it appears that Mauricio might have been battling a long-term depression. After the incident, Cat struggled mentally as the death of her spouse shook her to the core. Furthermore, in the 7th year after losing her husband, Zingano shared an agonizing post on her Instagram, expressing her grief and how she is still healing from it.

The MMA star has a kid named Brayden Zingano, who was born in 2006 from her previous affair. The information about Cat's former partner and Brayden’s biological father remains unknown. Cat Zingano’s son was adopted by Mauricio Zingano right after marrying her. 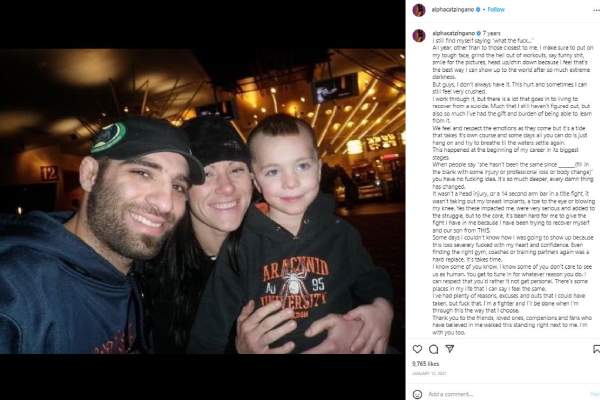 There has been no news of Cat's dating life after the death of her husband. It doesn't seem like she is seeing someone, and it also appears like she is enjoying her life with her son and is focusing on her career.

Cat has proved her physical strength repeatedly, but life’s not always about how strong one physically is; some battles can take a mental toll too. The years 2013 to 2016 were mentally and emotionally challenging for the MMA fighter.

In 2013, Zingano suffered a devastating knee injury during her routine practice before her match against Ronda Rousey. She got injured while training in a 10-inch hurdle. As a result, she had to undergo PRP and stem cell treatment. Zingano took a break for almost a year and a half to fully recover from the injury.

Eight months after losing her husband, the Minnesota native returned to bout against Amanda Nunes. Though she won the fight, Zingano got a pretty brutal beating in the match. In an interview, Cat revealed that she was scared at that time thinking about her son as she was the only parent he had. But she overcame both physical and emotional battles and is now continuing to be an inspiration for her child and other people.

Hence, Zingano is not only a fighter inside the octagon but outside as well. It is indeed praiseworthy to see her fight and overcome every challenge life throws at her.

Cat’s presence owns the whole room whenever she enters, such is her charm. But an unfortunate incident took place before her bout against Ronda at UFC 184. Before the match with Rousey, she threw her hat toward the audience. Coincidentally it almost hit the Irish MMA fighter, Conor McGregor.

Thankfully, Conor’s top-notch instinct saved him from Zingano’s hat attack. He happened to be there to watch the brawl between these two fierce women. After the incident, McGregor was highly praised for having cat-like reflexes. He later spoke about the moment in an interview.

Later, the lady fighter took this incident to Twitter to tease McGregor, saying she was doing her part to keep his reflexes sharp. Besides, Zingano also thanked him for praising her in the interview.

The former UFC fighter is out and about on her Instagram page, where she shares glimpses of her life with her fans. Miss Albert has 2000+ posts, and she mostly shares her training videos and upcoming fights on her profile.

Zingano’s Instagram account has become the primary medium for her fans to connect with her and get updates on her life experiences. In one of her Instagram posts, she opened up about her decision to get her breast implants out and how it helped her get rid of all the physical issues she had been facing due to it.

We hope Zingano is now leading a healthy life and is free from the hormonal issues she faced earlier. It is always an honor and a treat to watch Zingano fight in the ring. We look forward to seeing her in the bout with her fiery attitude and deadly tactics.