Home Entertainment Miesha Tate's Husband Johnny Nunez - Having Been Together Since 2018, Do The Pair Have Any Kids ?.

It's rare that we instantly think of female fighters when discussing MMA. But the story starts to change when women in this industry finally receive their rightful place in the spotlight. In the arena of mixed martial arts, Miesha Tate is one such name that, in a short time, has managed to leave her imprint and is still doing so.

Born Miesha Theresa Tate, the sportswoman is a former UFC Women's Bantamweight Champion and is still competing in the promotion. The fighting sensation, however, is not just making headlines because of her professional career but also her personal life. She is happily married to Johnny Nunez, and they are head over heels in love with one another. Here's an article dedicated to Miesha Tate's husband and their love life and relationship timeline.

On January 1, 2018, Miesha announced that she was in a relationship with Johnny Nunez, a fellow MMA fighter. They have been together since then and share a relationship that is as beautiful as a sunrise. Miesha walked away from MMA in 2016, and the pair began dating after her retirement. Before that, they were just teammates at Xtreme Couture. The couple fell in love afterward, which was the start of a lovely union.

Before being in a relationship, the two led quite different lives. Johnny Nunez's wife was previously dating her ex-boyfriend Bryan Caraway. He is an American MMA fighter currently competing in Battlefield Fighting Championship. The former pair had been together since attending Central Washington University.

However, the then-duo's relationship ended as it was getting toxic, and Miesha has been vocal about how her performances and training were impacted by it. In addition, Bryan was accused of stealing a 2015 Polaris RZR ATV from his ex-girlfriend and was charged in February 2021 with forgery, insurance fraud, and theft.

Although they are no longer together, Caraway will remain forever grateful to Tate, as she once saved his mother, Chris Caraway's life when she had an asthma attack while scuba diving in 2014. She stopped breathing and became unresponsive, but luckily our fighter woman saved her life. Miss Tate is a real-life hero, and there is no doubt about that.

Nonetheless, the ex-couple have outgrown their past and have moved on with their respective lives. Miesha is now happily living with her hubby, Johnny. On the other hand, Bryan is continuing his professional fighting career and is content in his life.

Till Death Do Them Part

Miesha and Johnny's relationship is beautiful, compassionate, and strong. The MMA couple has been together for a while now, and they never miss an opportunity to show their love for one another on social media. They frequently travel together and provide one another with invaluable support.

Furthermore, in May 2021, Miesha Tate's husband got down on his knee and shared how he proposed to make her feel special. As their wedding details haven't been revealed yet, could it be the pair had an intimate ceremony? 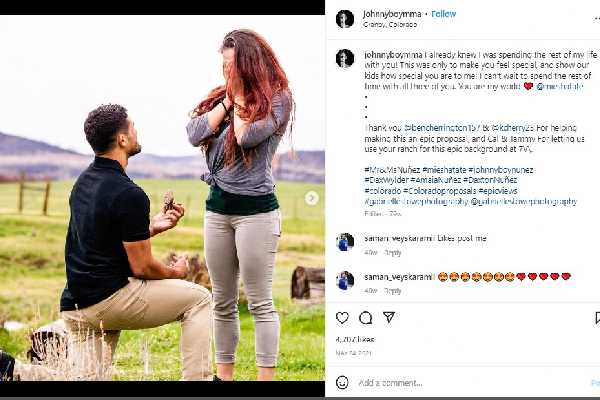 Besides, Miesha Tate's spouse is extremely supportive of her career. When she decided to come back to compete in MMA in 2021, he was fully there to support her decision and provided her with all the emotional support needed. On the other hand, Johnny Nunez's wife also has always been there for him and pushes him to be the best version.

Nevertheless, the MMA pair are doing really well, and we hope nothing comes in the way of their beautiful marriage.

READ MORE: Are The Adorable MMA Couple Dan Hardy And Veronica Macedo Married To Each Other?

To welcome little ones with the person you love is a beautiful feeling and both Miesha and Johnny are grateful to have experienced this emotion. The lovebirds first had the privilege of becoming parents with the arrival of their daughter, Amaia Nevaeh Nunez, on June 4, 2018. A few months later, on December 25, 2019, the fighter announced that she was pregnant with their second baby. Johnny Nunez's son, Daxton Wylder Nunez, was born on June 14, 2020.

The power couple is wonderful parents to their two adorable babies, and they shower unconditional care, love, and pampering on them. In addition, we can see through the pair's social media posts that the family of four is living comfortably, giggling, and loving one another. Moreover, Miesha Tate's children are still young, so it will be interesting to see if they will follow in her or her partner's lead. For that, we will have to wait for some time.

Many people might already know Miesha's partner is also involved in the MMA fighting scene. Raised in a single-parent household, Johnny started wrestling in Idaho and won a state championship shortly after. Alongside naming two Idaho state titles, he went on to compete in 2,000 wrestling matches before making his MMA debut in 2012.

Meisha Tate's husband competed primarily across North America and had a brief UFC stint in 2017. He also competed in Bellator MMA before joining his current promotion, ONE Championship. The fighter is determined to use his position to change his and other people's lives while also making a living.

Overall, Meisha and her spouse, Johnny, are a powerful couple who are strong-headed, loving, and dedicated. They have been together for several years and have a long way to go. We pray their love will endure all the bad days and conquer every hardship.