Aerin Rebecca Lauder Zinterhofer, also known as Aerin Lauder, is an American billionaire heiress and successful businesswoman. She is the daughter of Ronald Lauder and Jo Carole Lauder. Her father, Ronald, is the World Jewish Congress president and was appointed U.S. Ambassador to Austria by the late President Ronald Reagan.

Furthermore, her grandparents are Estee Lauder and Joseph Lauder, the co-founders of the cosmetics company Estee Lauder Companies Inc. Coming from an influential family, Aerin has always been in the spotlight, and several fans are also interested to know about her personal life.

A Happily Ever After

There are several marriages that we have witnessed that only lasted for a short time, yet there are few relationships and bonds that are meant to sustain forever. The perfect example of a happily ever after marriage would be the relationship between Aerin Lauder and Eric Zinterhofer.

The duo exchanged wedding vows on June 1, 1996, in Eric's home at Wainscott, Long Island, New York, with Rabbi Peter J. Rubinstein presiding. With a thriving and enduring marriage of over two decades, the pair have been each other's biggest support system.

The lovebirds first met at the University of Pennsylvania and dated for two years before they got engaged. Eric proposed to his then-girlfriend in Paris at one of her favorite restaurants. Furthermore, the duo's wedding ceremony was intimate yet beautiful.

Besides, Eric Zinterhofer's wife is also a supportive partner who has been there for him in every life obstacle. As mentioned earlier, she is a successful businesswoman who is also the style and image director for Estee Lauder Companies. She has her own cosmetic, fashion, furniture, and perfume line named AERIN.

Apart from this, the couple prefers to maintain their love-life lowkey; however, there is no doubt that the lovebirds have already found their soulmate and are carrying a legacy. Currently, the duo resides with their family in Manhattan's Upper East Side. Overall, they have a happy and solid marriage, and we hope they will never part ways.

The Couple Shares Two Children Together

After being together for several years, the duo has happily welcomed two sons, Jack Zinterhofer and Will Zinterhofer. Their older son, Jack, was born in July 1999 and graduated from The Wharton School of the University of Pennsylvania in May 2022.

On the other hand, Aerin Lauder's younger son, Will, was born in October 2000. Will also attends the Wharton School. He has also been seen skiing in the photos posted by his mother, Aerin. 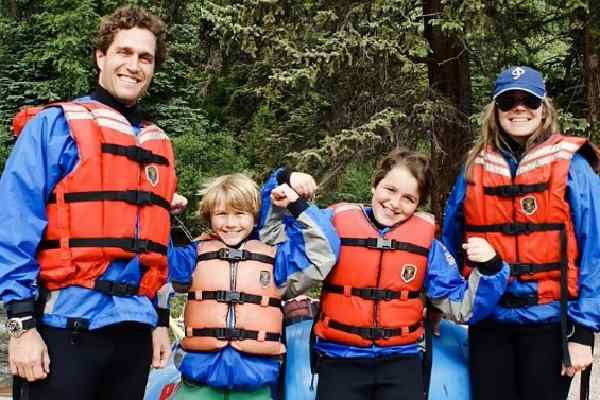 Furthermore, Eric Zinterhofer's children are still young and primarily focused on pursuing their education as of now. Hence, it is too early to talk about their professional lives as they are yet to establish it. Also, the couple has kept much information about their sons secret, and very little is known about them.

Nonetheless, Aerin and Eric have raised both of their boys well, and we hope they will achieve an abundance of success in the coming days.

All About Eric Zinterhofer's Professional Career

Eric Louis Zinterhofer is a highly intellectual person. Born in August 1971, he was welcomed into this world by his parents, Dr. Louis J.M. Zinterhofer and Susan A. Zinterhofer of Rumson, New Jersey.

He attended Phillips Academy and later completed his Bachelor's degree in Economics from the University of Pennsylvania. In addition, Aerin Lauder's husband holds a Master's degree in Business Administration and Management from Harvard Business School.

Talking about his professional career, from June 1998 to June 2010, Eric worked as a senior partner at Apollo Global Management Inc. He took this job under Leon Black, an American investor. Furthermore, in June 2010, Aerin Lauder's husband co-founded Searchlight Capital Partners with Oliver Haarmann and Erol Uzumeri. To date, he has been actively working there.

Apart from this, Eric is very private and likes to maintain his personal life lowkey. He is also not active on social media sites; hence very little is known regarding his upbringing and early life.

Nonetheless, Aerin Lauder's husband is excelling in his professional career, and the lovebirds also share a beautiful marriage. He is a wonderful dad to his two sons, and we hope Eric will succeed in everything he steps foot at. Our best wishes go to the entire Zinterhofer family.