Estee Lauder Companies Inc. is an American multinational cosmetics company, a manufacturer and marketer of skincare, makeup, hair care products, and fragrance, based in Midtown Manhattan, NYC. It was founded by Estee Lauder and Joseph Lauder in 1946. Likewise, the sole heirs to the company are Ronald Lauder and his brother, Leonard Lauder.

Ronald is an influential and successful businessman, philanthropist, billionaire, political activist, and art collector. He has a net worth of $4.5 billion as of 2022. Alongside enjoying a successful professional life, Mr. Lauder also shares a happy personal life.

He has been happily married to his spouse, Jo Carole Lauder, for several decades, and the duo is a supporter of the arts and civic causes. Hence, in today's article, let's discuss Ronald Lauder's wife and how she embraces art.

Ronald and his partner, Jo Carole Knopf Lauder, tied the wedding knot in July of 1967. With a thriving and enduring marriage of over five decades, the couple has been each other's biggest support system. When Ronald was a student at the Wharton School in Philadelphia, he met Jo Carole, an art student at Temple University.

Furthermore, the duo has been involved in several philanthropic activities, and a foundation named The Ronald & Jo Carole Lauder Foundation has also been established under their name. Also, according to records filed with the Federal Election Commission, the billionaire couple has donated directly to the presidential campaigns of both Donald Trump and Joe Biden. 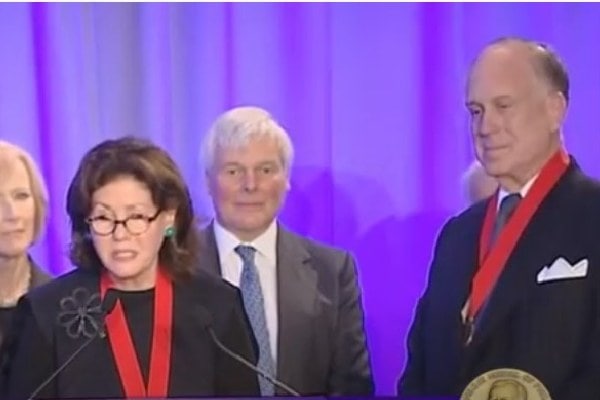 Although there are no official reports of their divorce, according to Gawker, the pair were separated in 2006. Similarly, a 2007 New Yorker article mentioned that the couple did separate, but they remain united in perpetuity courtesy of the Ronald S. and Jo Carole Lauder Building.

However, it has not been confirmed yet if the duo has officially divorced. Hopefully, we will hear more about their personal life in the coming days.

The Power Couple Are Wonderful Parents To Two Children

Mr and Miss. Lauder welcomed two daughters, Aerin Lauder and Jane Lauder Warsh, during their marriage. Their first child, Aerin Rebecca Lauder Zinterhofer, was born on April 23, 1970, while their youngest baby girl, Jane, was born in 1973. Furthermore, both of Jo Carole's kids have grown up and are successful in their individual professional lives.

Likewise, talking about their career, Aerin is the image and style director for Estee Lauder Companies, and she has her own perfume, cosmetic, furniture, and fashion line named AERIN. In addition, she is also happily married to her husband, Eric Zinterhofer, an investment banker.

On the other hand, Ronald Lauder's daughter, Jane, is the general manager and global president of Estee Lauder's Darphin, Origins, and Ojon brands. Likewise, currently, she runs the company's Clinique unit.

Jane is stable in her career and is happily married to Kevin Warsh, a former governor of the U.S. Federal Reserve System. All in all, the Lauder couple's children have flourished in their individual lives and achieved abundant success in whatever they have done.

Jo Carole Lauder is an art enthusiast who heads a foundation that commissions artworks for American embassies. She is the chairman of the Foundation of Art and Preservation in Embassies. FAPE is a nonprofit organization and a public-private partnership dedicated to providing permanent works of American art for U.S. embassies worldwide.

Furthermore, according to IMDb, Ronald Lauder's wife is also known for Sol LeWitt: Wall Drawings (2010). It is a documentary comprising 105 of Sol LeWitt's large-scale wall drawings, spanning his career from 1969 to 2007.

Besides, Jo Carole and her spouse, Ronald, have been among America's preeminent supporters of civic and art causes, with an impressive portfolio of professional accomplishments and worldwide philanthropic. As the founder and chairman of Clinique Laboratories, Central European Media Enterprises, and RWL Water Group, Jo Carole Lauder's husband is involved in various international commercial ventures.

Moreover, the Lauder duo has also collected a first-class personal collection of Viennese and modern German art that includes works by Egon Schiele, Gustav Klimt, and Otto Dix, among others. Similarly, Mr. Lauder gave more than 90 pieces of arms and armor in 2020 to the Metropolitan Museum of Art.

Overall, Ronald Lauder's wife, Jo, has been actively working to preserve and promote art, and it is inspiring for all of us. She also seems to be doing well in her personal life, and through this article, we are sending our best wishes to Mrs. Lauder.