Joe Biden has had a successful career as a politician and now is serving as 46th president of the USA. Image Source: Joe Biden Instagram

Joseph Robinette Biden Jr, aka Joe Biden, is the 46th president of the United States of America. Joe spent nearly a half-century in public service as a senator and vice president. Before turning to politics, he briefly worked as an attorney.

Biden is a well-known politician of America. He is popular for being Delaware's longest-serving senator and also the sixth-youngest senator in history. He is recognized for his landmark career legislation, which includes the 1994 Violence Against Women Act. Joe served as vice-president of the United States under President Barack Obama from 2009 to 2017.

Joe was born on November 29, 1942, and raised in Scranton, Pennsylvania. He was the first of four children of mother Catherine Eugenia Finnegan Biden and father Joseph Robinette Biden Sr. While Biden Sr. had been wealthy, the family faced financial difficulty at the time of Joe's birth. His father couldn't find a steady job at first but later succeeded as a used car salesman.

As a child, Biden suffered from fluency disorder or most commonly known as a stutter. Kids at school used to bully him, tease him with nicknames, and even mock him. A teacher from his school made fun of him by calling him "Bu-Bu-Bu-Biden." He overcame the stutter by reading and reciting Irish poems in front of a mirror. He can still recite the long passages of Irish poems from his memory. 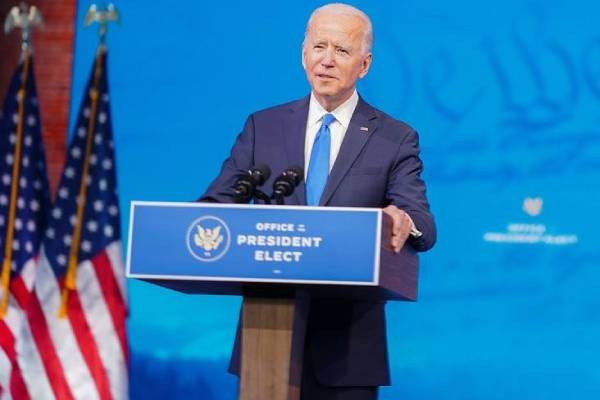 Biden attended St. Pauls's Elementary School in Scranton. After moving to Delaware at the age of 13, he attended St. Helena School and enrolled in Archmere Academy after graduation. Biden was a football enthusiast, so he joined the football team during his high school days. Biden attended the University of Delaware. There he double-majored in history and political science. He graduated in 1965. He earned a law degree in 1968 at the Syracuse University of Law. Biden practiced law and worked as a public defender before seeking public service.

During the time he was studying law, Joe started his family. He got married to Neilia Hunter in 1966. The couple had three children Robert Hunter Biden, Naomi Christina Biden and Joseph R. "Beau" Biden III. Sadly, in 1972 his wife Neilia and daughter Naomi were killed in an accident, and both sons were severely injured. Biden raised his two sons, Beau and Hunter, as a single father for five years. His family members and his sister helped him raise the kids.

In 1977, he remarried to school teacher Jill Jacobs at the United Nations Chapel in New York. The couple had one more daughter, Ashley Blazer Biden, in 1980. Ashley is a social worker who has been involved in dolphin conservation. She is also a fashion designer and has a clothing brand, Livelihood, through which she has helped combat racial and income inequality. She is currently married to Howard Krein, who is a plastic surgeon by profession. 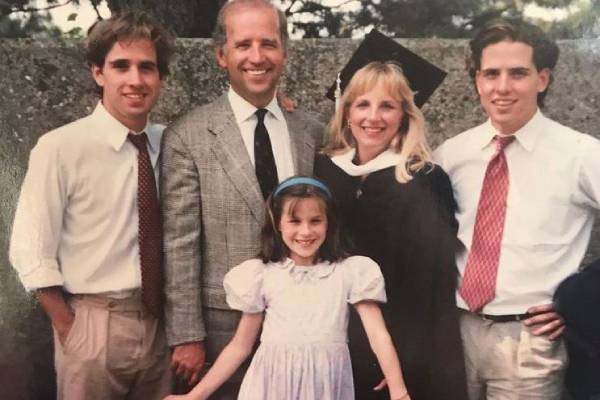 Biden's first child Beau was a well-known politician who worked closely with Kamala Harris. He joined the Army National Guard as a major in the Judge Advocate General's Corps. After that, he got into politics and was elected as the Delaware attorney general, where he served from 2007 to 2015. He had planned to run for Delaware attorney general. But he passed away in 2015 after battling cancer. His wife is Hallie Olivere, and they have two children, Natalie Biden and Robert Hunter Biden II.

Joe Biden's second child, Robert Hunter, currently works as an attorney and is the founder of venture capital firm Eudora Global. He was married to Kathleen Buhle and share three children Naomi Biden, Finnegan Biden, and Maisy Biden. They got divorced in 2017, and after that, he began a relationship with Hallie, his late brother's widow, and eventually separated in 2019. Currently, he is married to Melissa Cohen, a filmmaker from South Africa.

After graduating from the Syracuse University of law, Biden moved to Wilmington, Delaware, and began practicing at a law firm. He worked as an attorney for the next four years. Biden became an active member of the Democratic party, and in 1970, he started his own law firm.

In 1972, Biden was encouraged by the Delaware Democratic party to run against J. Caleb Boggs for the United States senate. Due to insufficient funding, the campaign for the election was mostly organized by his family member. In November, Biden won to become the sixth-youngest US senator in the nation's history. However, the loss of his wife and daughter made the victory sour.

Following the tragedy, Biden thought about resigning from his post to take care of his two sons. But then-Senate Major leader Mike Mansfield persuaded him not to resign. He took the oath of office from his son's hospital room. Biden decided to continue to live in Wilmington for his sons.

Biden served a distinguished senate career for decades. He spent 36 years in the US Senate. Biden's many foreign policies included advocating for strategic arms limitation with the soviet union, expanding NATO to include former Soviet- bloc nations, opposing the first Gulf War, and promoting peace and stability in the Balkans.

Biden also called for American action to end the genocide in Darfur. He spoke out against George W. Bush's handling of the Iraq War. He spoke out, particularly opposing the troop surge of 2007. He worked to preserve Delaware's favorable corporate climate, legislated against domestic violence, and crafted an anti-crime bill that provided for 100,000 more cops on the nation's streets, banned assault weapons, and mandated tougher penalties for drug dealers.

Biden established himself as one of Washington's most prominent Democratic lawmakers. As a result, in 1987, he decided to run for the U.S. presidency. However, he withdrew, citing that his past mistakes, including the reports of plagiarising a speech, overshadowed his candidacy.

After withdrawing from the 1987 presidential run, Biden once again decided to run for the U.S. presidency in 2007. Despite his years of experience in the Senate, his campaign could not gain much momentum in the field dominated by Hillary Clinton and Barack Obama. He had to drop out again after receiving less than one percent vote in the Democratic primary elections.

After dropping out, Biden emerged as a front runner to be Obama's running mate, as Barack had amassed enough delegates to secure the Democratic presidential nomination. On August 23, 2008, Obama officially announced Biden's selection as the Democratic Party's Vice presidential nominee. On August 27, Obama and Biden secured the Democratic Party's nomination. And then on November 4, the Obama-Biden ticket defeated the Republican ticket of John McCain and Sarah Palin. At the same time, Biden also easily won re-election to his U.S. Senate seat.

However, he resigned from the Senate post shortly before taking the oath of office as Vice-President. Biden played an active role in the administration, serving as the behind-the-scenes adviser to then-President Obama. Biden took particularly active roles in formulating federal policies to Afghanistan and Iraq. Then in 2010, Joe used his established Senate connections to secure the New Strategic Arms Reduction treaty between the US and the Russian Federation. 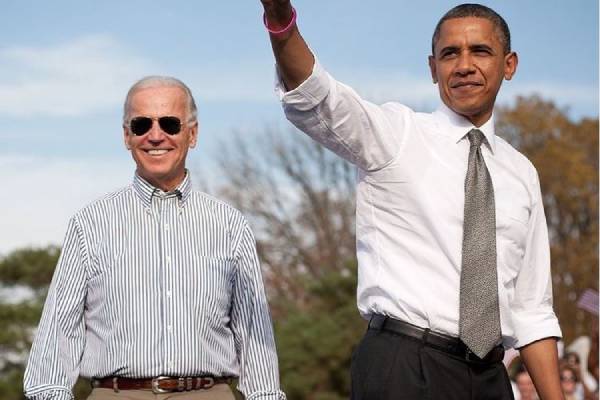 Obama and Biden were again re-elected for a second term defeating the Republican ticket of Mitt Romney and Paul Ryan in November 2012. During his second term as Vice President, he was instrumental in achieving a bipartisan agreement on tax increases and spending cuts to avoid the fiscal cliff crisis. Biden became a leading figure in the national debate about gun control, and he delivered solutions for reducing gun violence across the nation to President Obama in January 2013. Biden also helped craft 19 actions that the president could take on the issue using executive order power, among other recommendations.

Biden had to suffer another loss when one of his kids Beau Hunter died at 46, on May 30, 2015, after battling brain cancer. Before this tragedy, Biden considered running for the presidency once again. However, in October 2015, he put the speculation to the rest by announcing that he would not seek the 2016 Democratic nomination. Biden was presented with the nation's highest civilian award, the Presidential Medal of Freedom with distinction, by President Obama in a surprise ceremony at the White House.

After leaving the White House, he moved back to Delaware as a private citizen. However, he remained active in politics and was a vocal critic of President Donald Trump. On April 25, 2019, he announced his candidacy in the 2020 Democratic Presidential primaries. Biden was the front-runner among the Democratic Party's nominees. He pursued a platform that was considered moderate with candidates like Bernie Sanders. Biden finally became the presumptive Democratic nominee after Sanders dropped out in April with many ups and downs.

During a debate with Sanders in mid-March, Biden committed to nominating a woman to serve as his Vice President. Keeping his words, Biden announced Kamala Harris as his vice presidential running mate on August 11, 2020. This made Kamla Harris the first African American woman to appear on a major party's national ticket. The first presidential debate between Biden and Trump seemed messy as he was interrupted most of the time. But during the third debate, he was least interrupted as the microphones were muted. This made him easier to talk about his healthcare positions, immigration overhaul, and green jobs. 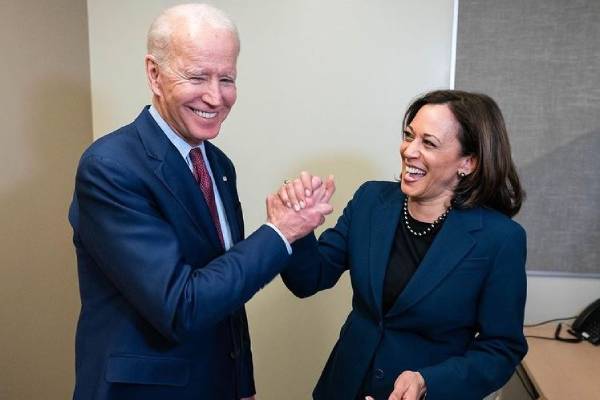 The election seemed to be in favor of Trump at first. However, the result shifted in Biden's favor with his victories in Wisconsin, Michigan, Arizona, Nevada, and Georgia. Biden's victory was finalized on December 14, 2020, when all the 538 electors in Electoral College cast their votes, out of which Biden received 306 votes, and Trump received 232 votes.

Biden and Harris faced many challenges when they began the transition to a new administration. On January 6, 2021, a mob of Trump supporters stormed the capitol building and overwhelmed the police forcing lawmakers to evacuate for their safety. Despite all this, in January 2021, Biden was sworn in as the 46th president of the United States amid a massive security presence.

According to Celebrity Net Worth, Joe Biden's net worth is $9 million. After leaving the White House, Biden earned mainly from speeches and book royalties. In 2017, Biden and his wife, Jill, reportedly had an income of $11 million.

Joe Biden's residence in the Greenville neighborhood in Wilmington, Delaware, overlooks a human-made lake that was built by members of the du Pont family, who were wealthy. In 1977, Joe and Jill bought their home for $350,000. For a six-bedroom vacation home in Rehoboth Beach, Delaware, the couple paid $2.74 million in 2017. Between 2018 and 2019, they paid $20,000 per month for a $4 million mansion in Mclean, Virginia, which they rented.