The MMA personality Paige VanZant looks nothing like a fighter, but she sure fights like one. VanZant is a blonde beauty who could raise eyebrows when introduced as an MMA fighter. In MMA, fighters are feared and judged based on their appearance, however, Paige is breaking this stereotype.

With her growing popularity, many people must be curious about the sportswoman. Hence, keep up with us to learn everything we know about Miss VanZant's net worth, relationships, career, and family.

Danced Her Way To UFC

VanZant was born Paige Michelle Sletten in Dundee, Oregon, on March 26, 1994, but was raised in Sherwood. Her parents, Steve Sletten and Rachel Sletten, owned a dance studio, so naturally, she grew up dancing and learning Ballet, Jazz, and HipHop. In addition, she also used to enjoy riding dirt bikes and fishing.

You might wonder how Paige got into MMA while her background is nothing related to what she is doing now. The credit goes to Mr. Steve, as he was the one who pushed his daughter toward her destiny. When the family moved to Nevada, Paige was looking for a dance studio near her home but came across the gym run by UFC Hall of Famer Ken Shamrock.

Since Mr. Sletten was a huge UFC fan, he persuaded Paige to join the gym. She was initially skeptical, but with a little nudge from her father, she tried her hands and initially concentrated only on boxing before moving into full-fledged mixed martial arts. Paige was instantly captivated and did a few amateur boxing matches as well.

In 2013, Dana White, the UFC's president, called VanZant personally and asked if she wanted to be a part of the reality television show called The Ultimate Fighter. She ecstatically agreed and joined the show to become one of the 16 strawweight fighters competing for the UFC championship. This was how she got into UFC despite having a very different start. It seems like your destiny always finds you, one way or another.

Was Raped, Bullied, And Even Considered Suicide

During her school years, Paige got bullied to the point that led her to eat lunch, hiding in the bathroom stall. She has opened up about how MMA saved her life as she struggled mentally. In her freshman year, she was raped by fellow students after they got her drunk. But the rumors spread around that she had consensual sex with the boys and the students at her school started to bully her mercilessly. At one point, she even considered suicide.

The MMA fighter was also called names like "Paige Slutton," due to which she changed her last name legally to VanZant from Sletten. We can only imagine the hurt she must have gone through for her to change her surname. However, from her past experiences, she has more empathy towards those who get bullied and wants to advocate for anti-bullying using the platform and voice she has gained.

VanZant didn't choose MMA to get back to her bully, she just happened to love it. But in retrospect, we can find some connection. It could be the sense of confidence and protection she got from fighting which led her to believe she doesn't need someone else to protect her as she can do that on her own. This could be why she said that MMA saved her life and changed her life's direction. If it wasn't for how the sport made her feel, she would have chosen a different career.

All About Paige VanZant Career

Paige made her professional MMA debut on June 30, 2012, when she was just 19 years old, at UWF's Tournament of Warriors finale against Jordan Nicole Gaza, which she won by split decision. She then signed with the Ultimate Fighting Championship (UFC) as one of the cast members of The Ultimate Fighter in 2013. However, on March 31, 2014, VanZant was dismissed from the reality series because the minimum age to compete in it was 21, whereas she was only 20.

Regardless, the Oregon native made her UFC debut against Kailin Curran in the strawweight division in August of the same year. In August 2017, VanZant was scheduled to compete against Jessica Eye in the flyweight division but withdrew due to a back injury. Eventually, Paige made her flyweight debut against Jessica Rose-Clark in 2018 but lost via unanimous decision. She bounced back in 2019 following her victory against Rachael Ostovich.

VanZant is currently signed as a wrestler to All Elite Wrestling and as a fighter to Bare Knuckle Fighting Championship. In August 2020, the fighter signed a four-bout contract to fight exclusively in the BKFC, which was said to be worth more than $1 million. Talking about her BKFC fights, in July 2021, VanZant lost a match against Rachael Ostovich in BKFC 19 by unanimous decision.

The ex-UFC star is currently competing in BKFC, but that doesn't mean other promotions have stopped extending their offers. For instance, she was offered a free-agent contract by WWE after leaving UFC, which she denied.

Paige VanZant Net Worth And Earnings

Now that we have talked about her career, let's move on to Paige VanZant's net worth and earnings. As MMA is her main source of income, she has earned a significant amount from it up until now. The table below shows some of her earnings while competing in UFC.

VanZant also has a website for her merch. Some of the prices of her products are in the table below:

Paige also earns through Monster Energy Drinks, Metro PCS, and Harley Davidson endorsements. Moreover, VanZant had a modeling and acting career prior to fighting and has been in national commercials as well. She was a child actor for the Bissell steam mop ad and also has modeled for athletic clothing brands, including Nike and Columbia Sportswear.

Not just that, the lady fighter has an OnlyFans account whose monthly subscription amounts to $9.99, and 12 months subscription bundle costs $95.9. Finally, the Oregon native has published a biography called Rise: Surviving the Fight of My Life, where she talked about her life events, relationships, and lessons she learned. It was released on April 10, 2018, and is available for $24.99 in hardcover. These all are the secondary sources of her income that add up to her fortune.

Is Married To An MMA Fighter

The former UFC fighter has found the man of her dreams and is happily married to Austin Vanderford. She met Vanderford, a professional MMA fighter, through Chael Sonnen. He was the wingman who instigated Paige and Austin's love story. During one of the local matches, Sonnen made VanZant and Vanderford sit next to each other. Later, Austin invited Paige to eat together, and then the rest is history.

VanZant announced that she was dating Austin by uploading a picture of them with a caption saying, "Mine." Eventually, the couple got married on September 29, 2018, in a private and sophisticated wedding ceremony. Paige legally changed her last name to Vanderford from VanZant afterward. 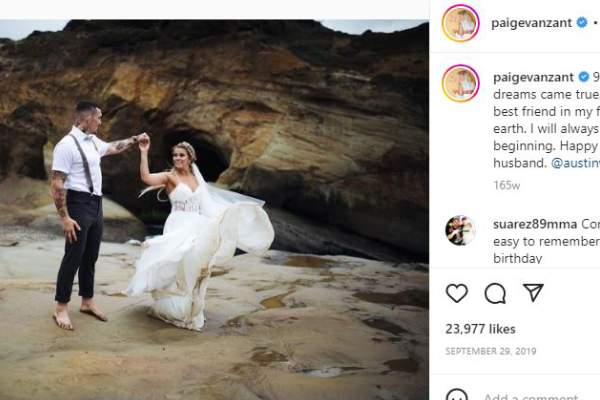 Paige VanZant married her boyfriend Austin Vanderford in September of 2018,

The couple celebrated their 4th marriage anniversary in 2022, and Paige posted a video compiling all the good times they shared together. Furthermore, Paige VanZant's husband also doesn't shy away from sharing how much he loves her. Also, the pair hasn't welcomed any children as of now. The BKFC competitor once shared that she would not have a kid until she is financially secure.

Nevertheless, we wish the couple lifetime of happiness and togetherness.

Overall, Paige has come a long way, from being bullied to headlining matches in the MMA. Her success is all thanks to hard work, determination, and support from her loved ones. Her story could be inspiring to those who have been bullied or are still being bullied, and we all can learn something from VanZant's bravery and never giving up attitude.