When talking about MMA, it's less likely that we immediately think about female fighters. But the narrative is gradually changing as women in this field are finally getting their well-deserved spotlight. Rachael Ostovich is such a name in the field of MMA who, in a short period, has managed to make her mark and is continuing to do so.

Ostovich once shared that she is not just a competitor but a fan of all the trailblazers who opened the door for WMMA. Women in MMA are trying to break the cultural stigma where only men are considered strenuous and vigorous while women are considered weak. And Rachael is one of them.

Since Miss Ostovich's career is taking off, fans are curious about her. So, let's get to know everything from her net worth, career, relationships, and dating life.

Grew Up With Two Siblings

Rachael Lii'lani Ostovich was born in Hawaii, USA, on February 25, 1991. Her mother's name is Deborah Ostovich, and her father's name is Robert Ostovich. She is the middle child of three, and her brother is named Robert Ostovich Jr. It can be seen that the Ostovich family shares a strong and loving bond. At times, we can see them supporting Rachael from the corner during her bout.

Miss Ostovich competed in Judo, cheerleading, gymnastics, and wrestling during her academic years. After graduating from a local school, she convinced her father to give her permission to try and pursue MMA as her career. Thankfully, this decision turned out well, as she succeeded in creating a mark for herself in the field of WMMA.

Rachael Ostovich Net Worth And Career

The Hawaiian native first started her non-professional MMA career in 2010. She was undefeated for the next three years and assembled a record of 6-0. Ostovich kicked off her MMA career professionally in 2014 and later faced Evva Johnson at Invicta FC 10. She won the bout with Johnson by a split decision. Then, Andrea Lee faced Ostovich for her second bout at Invicta FC 14 on 12 September 2015. However, Ostovich tapped out to Lee's armbar with few seconds remaining in the fight.

Ostovich won her third bout via split decision where her opponent was Ariel Beck. Likewise, for her fourth and final match for Invicta promotion, Rachael faced Christine Ferea but lost by Technical Knockout (TKO). After leaving Invicta in 2017, she competed in The Ultimate Fighter 26. In the event, the lady fighter defeated Melinda Fabian by rear-naked choke but lost to Barb Hanchak in the quarterfinals by unanimous decision.

On December 1, 2017, the former Invicta fighter won against Karine Gevorgyan in the first round due to an armbar submission. This victory was followed by a loss against Montana De La Rosa. Furthermore, she also cashed notable tournament money from her matches. According to their hype and demand, every MMA player has a distinct price range. Their pay also varies according to the type of matches they compete in.

To get a vague idea about her earnings per match, we have listed down a few prize money Rachael got from her bouts.

There's no accurate telling of how much Rachael Ostovich's net worth is, but getting a glimpse of her personal life through her Instagram, it appears she is living a relatively comfortable life.

No matter how picture-perfect your life might look on the outside, it seldom is on the inside. Rachael is a young, beautiful, talented, and strong MMA fighter with a lot of potential, and some might even wonder what possibly she could want more. But her personal life isn't all sunshine and rainbows.

The Honolulu native was set to face Paige VanZant on January 19, 2019. But things went awry after the reports of her getting brutally assaulted by her husband, Arnold Berdon, surfaced. As a result, she suffered a broken orbital bone and was even hospitalized. Due to this, Ostovich pulled out from the fight against VanZant.

On August 10, 2019, Rachael was supposed to face Veronica Macedo, but later in July, UFC announced Polyana Viana as her replacement for the scheduled bout. The reason behind this is undisclosed. Furthermore, the UFC fighter was lined up to have a match against Shana Dobson at UFC Fight Night 168, but due to a positive drug test for ostarine, she was withheld from participating and was replaced by Priscila Cachoeira. Additionally, she was suspended for eight months by USADA.

After her suspension, Rachael made her comeback on November 28, 2020, for her match against Gina Mazany. Unfortunately, she lost the match by TKO from body kicks. With all these dramas encircling Ostovich and three consecutive losses, she got laid off by UFC on December 7, 2020. Afterward, she competed in an event for BKFC in 2021.

Is A Loving Mother Outside The Ring

Rachael is a divorcée who shares a daughter with her ex-husband, Arnold Berdon, who is also a pro MMA fighter. The former couple divorced after Rachael was assaulted by Berdon in November 2018. The latter was sentenced to four years probation, and the court gave Rachael custody of their child Ruby Rose Berdon. Arnold was permitted supervised visits because Ostovich found it crucial to have a father figure in their little girl's life.

Rachael Ostovich's daughter was born on March 22, 2013. After the divorce and full custody of the child, Rachael seems to be living a delightful life alongside her kid. Looking at her pictures, Ruby Rose, lovingly called RuRo, clearly got her good-looking genes from her mama.

Despite all the curves life's been throwing at her, the sportswoman keeps moving forward more graciously and wisely. Her Instagram is filled with her daughter's pictures and all the cute mom-daughter kinds of stuff. It is clear that as fierce Rachael is as a fighter, she is just as loving and tender as a mother.

Another Chance At Love

It must be quite difficult to trust in love and second chances when previously you've been let down so badly. But real courage is not letting past mistakes hold you back from what the future has to offer. Rachael found the courage to take a leap of faith once again at love after meeting the comedian Tumua Tuinei.

The new couple appears on each other's Instagram page quite frequently. It isn't clear when exactly they started dating, but the lovebirds first shared their picture together on their accounts around June of 2021. They do not hold back from sharing their love and support for each other. 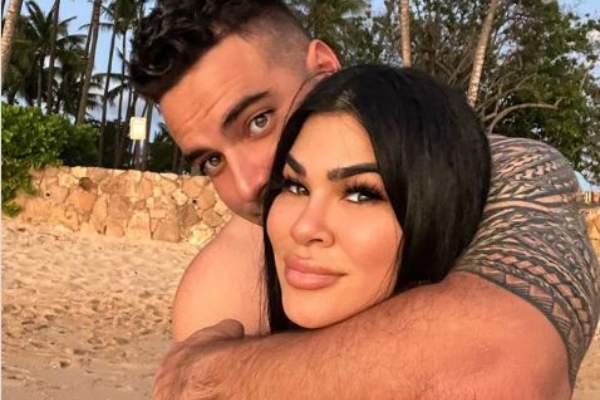 Rachael Ostovich's boyfriend, too, never misses a chance to show his love and admiration for her. He even penned down a message for Rachael's daughter, Ruby, mentioning how smart and amazing she is. From the looks of it, Ruby has a good relationship with her mom's boyfriend as well.

Looking at how everything turned out for Rachael, we're happy to see her flourishing and growing. As a fellow MMA fan, we look forward to seeing her in the ring anytime soon. We wish her all the best for her future.