Andrea Lee is a professional kickboxer and MMA fighter who competes in the flyweight division in the UFC. Image Source: Andrea Lee Instagram.

When provided equal opportunities, platforms, support, and hope, women can accomplish and conquer anything and everything they set their minds on. They possess everything that it takes to become well-known on a global scale and are no less than men. Today, we will discuss about yet another fearless and determined woman who has long been actively engaged in the fighting industry.

She is Andrea Lee, an American kickboxer and MMA fighter who competes in the flyweight division in the Ultimate Fighting Championships (UFC). The sports persona is ranked #9 in the UFC women's flyweight standings as of December 2022. Still, Andrea is much more than her victories. Hence, without any further ado, let's learn more about her biography, which covers details from her early childhood to personal relationships.

Is Close To Her Family

The dedicated fighter was welcomed into this world by her parents on February 11, 1989, in Atlanta, Texas, U.S. Andrea is exceptionally close to her mother, Cheryl Taylor, and her father, Kent Lee; she frequently shares pictures with them on her social media handles and is seen expressing her gratitude.

While her mom is a former dispatcher at Cass Country Sheriff's Office, not much is known about Andrea Lee's father's professional background. Besides, Lee grew up alongside her brother, Jacque Lee. She also shares a tight-knit bond with her sibling, and their relationship is adorable.

Speaking of her educational background, Andrea attended and graduated from Queen City High School, where she competed in Volleyball and powerlifting. After finishing high school, she relocated to Bossier City, Louisiana, and started working as a waitress at a neighborhood sports bar.

The Atlanta native became quite interested in martial arts due to the bar's showings of MMA events. With her friends' support, she decided to look for a trainer. Almost immediately, Andrea saw that a profession in MMA and Muay Thai was the natural choice for her life path.

Andrea Lee Net Worth And Career

With a total combat sports record of 36-6, Andrea has created one of the most accomplished combat sports careers of any female fighter in the world after six years of training. She is a two-time North American champ, a three-time amateur world Muay Thai champ, and has countless MMA titles. The Atlanta native is also a National Golden Gloves Boxing Champ.

After amateur bouts, Miss. Lee joined Invicta FC & Legacy Fighting. Her first fight at Invicta FC was against Shannon Sinn on November 1, 2014; she won the bout by unanimous decision. After that, Lee competed for Legacy FC, defeating Ariel Beck to win the Legacy FC flyweight championship. In 2016, Andrea competed once more for Invicta, where she was submitted by Sarah D' Alelio. The athlete then received a nine-month suspension after testing positive for a diuretic in a drug test.

Furthermore, in September 2017, the fighter signed with the UFC to make her promotional debut two weeks after her last bout. She was scheduled to compete at UFC 216 against Kalindra Faria; however, shortly after the fight was announced, she was removed from the event due to a clause in the UFC Anti-Doping Policy requiring fighters with prior violations to spend six months in the testing pool before participating.

On May 19, 2018, the athlete made her debut on UFC at UFC Fight Night 129, fighting against Veronica Macedo. Andrea won the fight by unanimous decision and earned the Fight of the Night bonus. Following that, the Texas native competed in several bouts in the promotion. Here is a table representing some of Andrea's earnings and UFC results.

Besides, the fighter is set to face Maycee Barber at UFC Fight Night 222 on March 25, 2023. With a pro-MMA record of 13-6-0 and several UFC wins, we can expect Andrea to have earned significantly. She has worked hard all these years, received acclaim, and made a good income.

There is no precise telling of how much Andrea Lee's net worth is. Still, looking at the bouts in which the American fighter has competed, Lee has cashed thousands of dollars in cash prizes.

Earnings From Merch And Other Sources

Apart from her fighting career, Miss. Lee has also launched her merch, and from the product sales, she must have been earning well. Let's look at some of her products alongside their prices in the table below.

In addition, the sports persona is also sponsored by The Healing Panda, a store selling pure CBD-infused edibles and products, and John N. John, a transportation company based in Louisiana. She is also active in OnlyFans and must earn well from subscriptions.

Found Love In Her Second Partner

The UFC fighter shares an established and prosperous professional career, and there is no doubt about that. But does her personal life looks equally thriving and beautiful? Let's learn more about her romantic relationships, as several fans are intrigued to know her inside and out.

Unfortunately, the Atlanta native faced many bad times in her personal life. She was previously married to Donny Aaron, an ex-cop and a retired IKC champion. Andrea and her ex-husband tied the knot in the early 2010s and were together for several years. Although the UFC fighter and her former partner appeared as a loving pair, many troubles were lurking in their marriage.

After Andrea Lee's ex-husband's warrant was issued in August 2018, everything came to light. The MMA fighter accused her then-spouse of assaulting her at their house in Shreveport. According to the report, Donny allegedly choked her and threatened to light a cigarette on her arm. In addition, Andy Nguyen, Lee's teammate, also offered a statement supporting the claim. After the domestic abuse charges were made, Aaron went into hiding and wasn't found for nine months, until May 2019.

Domestic battery and failing to appear in court were the charges brought against Andrea's ex-partner after his arrest. He was released soon on a $1,700 bond and was awaiting a court date.

After being subjected to domestic violence, Andrea had to suffer a lot in life. But life goes on and doesn't stop for anyone, and Lee, too, has moved on from her ugly past. What's more, she has found her soulmate who treats her right. The UFC competitor is in a happy relationship with fellow fighter Tony Kelley. The lovebirds have been dating for a while now and share a beautiful bond. Moreover, Andrea Lee's boyfriend has been fighting professionally since 2012 and is known for his UFC fighting stint. 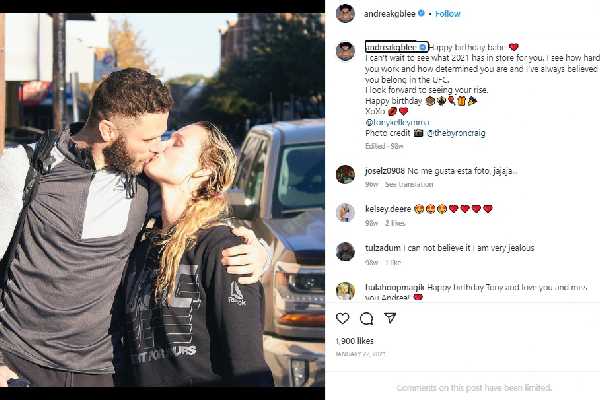 Overall, the pair are happy in love, and we can't wait to hear the happy news of their marriage in the coming days. We are sending our good wishes and strength to the lovely couple.

Shares A Child With Her Ex Husband

Though her marriage ended on bad terms, it provided Andrea with her daughter, Ainslee, born in 2012. She is a ballerina and shares her mother's beauty. The UFC competitor often posts pictures of her little girl on social media handles, for which she received backlash. She was reportedly attacked for exposing her child to the media and blamed for using Ainslee to boost her reputation.

In response to the haters, the IKF World Classic Amateur Muay Thai Champion replied that she is proud of her only child and only posts mom-daughter pictures. The fact that Andrea Lee's daughter is still relatively young limits her from completely understanding the significance of MMA combat. As a result, the former is aware that Ainslee might not fully understand her profession, but she hopes that her little daughter will become more involved.

To conclude, Andrea has faced many highs and lows in her life, but still, she is standing tall and proud. While not fighting, she spends quality time with her boyfriend and daughter. We are delighted for her and wish her more success and wealth.