When given equal opportunities, support, platform, and hope, women can conquer and achieve everything and anything they want. They are no less than men and have everything in them that takes to be renowned worldwide. Today, we will talk about yet another strong-headed and bold woman who has been actively involved in the fighting sector for many years. She is Claudia Gadelha, a retired Brazilian mixed martial artist who competed in the Ultimate Fighting Championship (UFC) in the Women's Strawweight division.

Since Claudia has retired from the MMA field, several of her fans are intrigued to know what she has been involved in lately and how she is helping to give back to society. Here's a short biography dedicated to the fighting sensation, which includes several details, such as her personal life and professional career.

Had A Tough Late Childhood

The fearless fighter was born Ana Cláudia Dantas Gadelha on December 7, 1988, in Mossoro, Rio Grande do Norte, Brazil. She was welcomed into this world by her mother, Izinha Gadelha, and her father, Luiz Carlos Gadelha. Her parents have been married since 1986 and have been together for over three decades.

Apart from being a loving daughter, Claudia is also a caring and supportive sister of two. Among her siblings, her sister, Ana Celia Gadelha, is married to Felipe Silva Albuquerque and is a loving mother. Even though the fighter seemed to have a perfect personal life, her early life was a mess.

Claudia had a troublesome late childhood and early youth. Although she had supportive parents, her mom did not get along with her rebellious personality, which, in her opinion, was inappropriate and did not sit well with a girl. Gadelha's parents did not support her desire to train in martial arts either. Later, the Mossoro native came into contact with drugs and bad company, forcing her parents to send her to Natal to distract her away from these influences and enable her to complete high school. This shift dramatically altered her way of life. When she was 14, she began secretly working out in a gym.

The sportswoman once watched a female fighter compete at an MMA event in Natal. The experience stoked her enthusiasm for the sport. On the same occasion, she met Jair Lourenço, the owner of the Natal gym 'Kimura Nova Uniao,' and he extended an invitation for her to enroll in a course at the academy. Gadelha's association with Nova Uniao was solidified shortly after when, by complete coincidence, her dad rented an apartment in the Kimura headquarters. She stopped using narcotics and devoted herself to martial arts from that point on.

Additionally, Gadelha relocated to Rio de Janeiro when she was 18, where she made her MMA debut and celebrated her BJJ victories. Talking about her educational background, as per her LinkedIn, Claudia attended the Institute for Integrative Nutrition to get her Health coach certificate. She also completed her Bachelor's degree in law from Faculdade FACHA.

Early Days Of Her Career

As mentioned earlier, Claudia trained at Nova Uniao to prepare for her fighting career. In March 2016, she opened her gym named Claudia Gadelha's MMA & BJJ Academy. The Rio Grande do Norte native left Nova Unio in August 2016 and decided to move to Stroudsburg, Pennsylvania, in the USA. Likewise, Gadelha's Academy (now known as CG Ultimate Fitness Academy) relocated to Randolph, New Jersey, on November 1st of the same year.

In July 2017, the former UFC fighter relocated to Albuquerque, New Mexico, at the request of the owners of her training gym, 'Luttrell/Yee MMA.' The BJJ Rio International Open champion also trained at the Jackson-Wink MMA Academy, which interacts with Luttrell/Yee MMA. Then, early in 2018, the sports persona relocated to Las Vegas, Nevada, where she trained at the UFC Performance Institute and Xtreme Couture.

Furthermore, the Brazilian fighter made her pro-MMA debut at Force Fighting Championship 1 on June 5, 2008, against Elaine Leite. She won the match in 17 seconds via armbar. The following six fights Gadelha fought resulted in victories, keeping her 7-0 record unbeaten. Similarly, she made her North American MMA debut on April 20, 2012, against Valerie Letourneau at Wreck MMA: Road to Glory which she won by a split decision.

Claudia Gadelha Net Worth And Career

Claudia fought her debut match at Invicta Fighting Championships on May 11, 2013, where she faced and defeated Herica Tiburcio at Max Sport 13.2 in Brazil. Then at Invicta FC 6, she fought against Ayaka Hamasaki.

The UFC signed Gadelha to compete in season 20 of The Ultimate Fighter, which will name the first-ever strawweight champion, along with ten other strawweight fighters. It was announced on December 11, 2013, but later, in April 2014, it was revealed that Cláudia had signed a direct contract with the UFC rather than competing in TUF 20.

Furthermore, the former Brazilian fighter's first fight in the strawweight division in the promotion happened at UFC Fight Night: Cerrone vs. Miller on July 16, 2014, where she faced Tina Lahdemaki. She won the fight via unanimous decision. Now, let's look at some of Claudia's UFC wins alongside the prize money she received.

Although the BJJ world champion was doing exceptionally well in her matches and winning most of them, she announced her retirement from competing professionally in MMA on December 17, 2021. Her final bout at UFC was against Yan Xiaonan on November 7, 2020, on UFC on ESPN: Santos vs. Teixeira; sadly, she lost the match via unanimous decision.

Even though the former UFC star retired from her fighting career, she is still working for the promotion as Athletic Director, with her main objective of developing young athletes in her native country. She must also earn a hefty sum from her current position. As such, we can expect Claudia Gadelha's net worth to be of notable amount.

Is The Fighter Romantically Linked With Somebody?

Although Claudia's professional life is an open book, her personal life is low-key, and a secret that many people want to know about. As a result, little is known about her current romantic affairs or whether she is interested in anyone. The former UFC fighter, however, was allegedly dating Camila Oliveira in 2019. They used to share many photos and were extremely close to each other. However, Camila appears to be dating someone else, dispelling the rumors.

Furthermore, the Mossoro native was also rumored to be dating fellow MMA fighter Brian Ortega. But, the two have cleared the speculations and confirmed they are just good friends, which leaves all the fans wondering who Claudia Gadelha's partner is.

Unfortunately, going through the sports persona's social media handles also don't reflect much on her personal life; hence she seems to be focused on her professional career for now. After retirement, she is working on the motive of giving back to the fighting community, and we hope everyone will be familiar with Claudia Gadelha's boyfriend in the coming days. 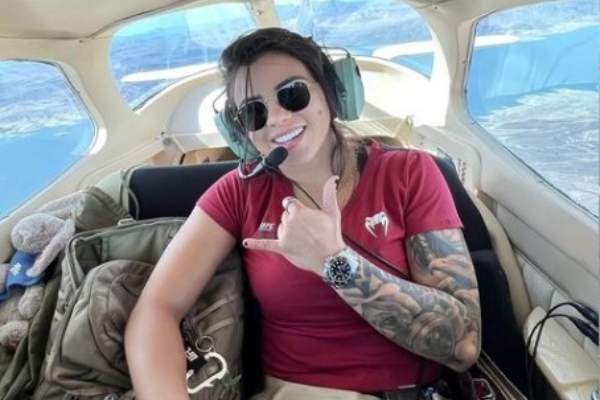 Overall, Claudia, the three times BJJ world champion and seven times BJJ Brazilian Nationals champion, is a fighter of life and profession. She has faced many ups and downs in her career, yet she stands firm. Our best wishes, good luck, and light follow her way.