Ariane Lipski is a renowned MMA fighter who has competed in many matches. Image Source: Ariane Lipski Instagram.

Women have made remarkable progress in many facets of life in the past century; there can be little uncertainty about that. Today, women can hold occupations, own properties, and participate in professional sports. They can go in for sports, once a relic of male dominance; there is now room for women in the sports arena.

Likewise, today, we will be talking about yet another headstrong woman who has made a significant reputation for herself in the history of mixed martial arts. She is Ariane Lipski, a former KSW Women's Flyweight Champion who is currently competing in the Ultimate Fighting Championship (UFC) of the flyweight division.

Still, Miss. Lipski is more than just her wins; therefore, let's unveil more about this fighting queen, including her professional career and personal life, in this following biography.

Grew Up Alongside Her Elder Sister

The fighting sensation was born on 26 January 1994 in Curitiba, Parana, Brazil, with Polish heritage. The sports persona grew up in a loving and supportive household and was raised by kind parents. Ariane shares a tight-knit bond with her mother, Gisele Siqueira, and her father. Not just a loving daughter, Ariane is equally a caring sister to Ariele Lipski. She also frequently shares pictures of a small boy, addressing him as her brother.

Furthermore, Ariane's grandfather moved to Brazil before the Second World War for security considerations. Did you know when she was 18, she gave up everything to pursue a career as a professional fighter? At the age of 17, she had to work to support herself as her mom moved to a different city, leaving her alone with her granddad. Ariane Lipski's grandpa was retired and sickly and could not afford to provide her with more than a room in his house.

Lipski started training Muay Thai early and won the Brazilian Muay Thai championship before switching to MMA. The Curitiba native was highly passionate about fighting, and no wonder, with her consistent hard work, she grew up to become a renowned fighter in the MMA scene.

Talking about Ariane's educational background, one point came in her life when she had to choose between working, training, and studying, and she chose to stop studying in order to keep training and working.

Ariane Lipski Net Worth And Career

Before stepping her foot into fighting, Lipski worked at a lawyer's office first. Later, at a dental clinic, and when she was 18, she started working at the front desk of the gym. Ariane started training in the gym while sitting at the front desk. Although her mom wasn't happy with her fighting decision, it seemed that destiny had something else written for her. As a result, her professional career began in 2015, thanks to her coach Renato Rasta.

Most of Lipski's early MMA matches took place in Brazil and Poland, particularly those promoted by Konfrontacja Sztuk Walki. After winning her debut in KSW, Ariane faced Sheila Gaff at KSW 36, where she defeated her by first-round knockout. Moreover, her last bout for KSW was against Silvana Gomez Juarez at KSW 42 on March 3, 2018. She won the fight and successfully defended her title via unanimous decision.

The fighter later signed a contract with UFC. Initially, Ariane was all set to make her UFC debut against Maryna Moroz at UFC Fight Night 140 on November 17, 2018; since Moroz pulled out due to injury, the bout was canceled. On 19 January 2019, her UFC debut came at UFC Fight Night: Cejudo vs. Dillashaw against Joanne Calderwood. Unfortunately, the Curitiba native lost the fight by unanimous decision.

Although the Brazilian native didn't win her first two matches, it didn't affect her confidence and self-esteem. On November 16, 2019, Ariane won her first UFC match against Isabela de Padua at UFC on ESPN +22. Likewise, as of December 2022, Lipski has fought in eight UFC matches.

As of 2019, the average salary of a UFC fighter is $146,673. So, Ariane must also have earned a considerable sum. Therefore, Ariane Lipski's net worth must have been significantly influenced by her UFC fighter earnings.

Likewise, the Curitiba native also makes money from her released merches. In collaboration with Millions, she has launched her merch. Here's a table showcasing some of her products alongside the prices.

Overall, with a pro-MMA record of 14-8-0 and some collaborations, we can expect Ariane Lipski's net worth to be significant. Hopefully, she is also living a comfortable lifestyle due to it.

Her Husband Is A Fellow MMA Fighter

Sometimes, home isn't a place; it's a person, they say, and it couldn't have been the other way around for Ariane. Well, the UFC fighter has already found the feeling of home and comfort in her partner, Renato Silva. The pair officially exchanged wedding vows on April 2019 and have been together ever since.

Their relationship is based on the foundation of trust, honesty, and love, and they are each other's significant support system. Furthermore, Ariane Lipski's husband, Renato, is a Brazilian MMA fighter and coach from Curitiba. He is a trainer at Rasthai, a professional sports team, and is actively involved in the fighting sector. 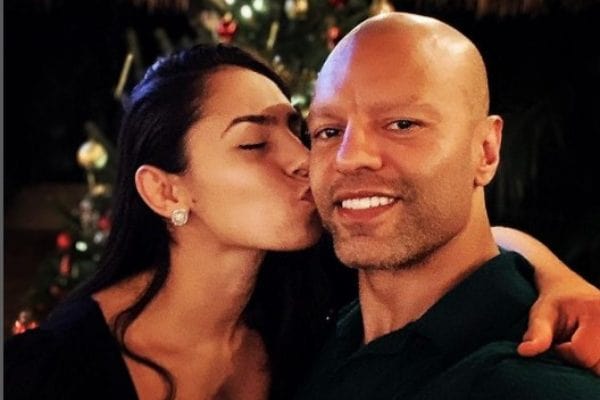 Moreover, since the husband-wife duo shares the same professional background, there must also have been a sense of understanding and ease between them. Nonetheless, they are in an enduring and thriving marriage, and we hope their love will stand strong enough to face all the storms.

Besides, the couple doesn't share any children; however, Renato is a father to Renan Silva. Although it is unknown who Renato's baby mama is, he gets an equal amount of love from Ariane. The three often travel together, and they share an incredible bond.

All in all, the Curitiba native is an excellent partner and a loving daughter, apart from being a fearless fighter. Ariane is a role model for many aspiring fighters worldwide thanks to her impressive MMA background. We wish Lipski luck in everything she does and success in her future endeavors.