There is a saying, 'How you do anything is how you do everything,' and this statement can be implied to Amanda Ribas, a Brazilian professional MMA fighter who does everything with utmost dedication, hard work, and courage. Amanda currently competes in the Ultimate Fighting Championship in the Strawweight division.

Amanda is currently ranked #9 in the UFC women's strawweight rankings as of August 15, 2022, and #15 in the women's flyweight rankings as of December 2022. Still, Miss Ribas is more than just her wins; hence let's unveil more about this fighting sensation, including her personal life and professional career, in this following biography.

The fearless fighter was born on August 26, 1993, in Varginha, Minas Gerais, Brazil. She is the daughter of a judo and jiu-jitsu coach, Marcelo Ribas. Marcelo teaches Muay Thai and runs Academia Ribas Family, a gym/physical fitness center. He trained Amanda until she was a member of one of the Brazilian national youth judo teams.

Since early childhood, the mixed martial artist was raised inside a gym, and she started taking jiu-jitsu classes at a young age. However, Miss Ribas quit training because of several knee injuries and went dancing classes with her friends; but her dad wasn't happy with this decision. Hence, when she returned to the gym one year later, Marcelo signed her up for judo classes.

Although Amanda Ribas' father was strict with her sometimes, most of the credit for her success today at the fighting scene goes to him. The father-daughter duo is exceptionally close to each other and shares a tight-knit bond. Furthermore, the fighter also shares a beautiful relationship with her mother, Mirelly Limborco. Mirelly also works at the family gym as a personal trainer.

Apart from being a loving daughter, Amanda is also a supportive sister of Arthur Ribas and Marcelly Ribas. The sports personality is the middle child of her parents. While her elder brother is also involved in the fighting scene, her younger sister is passionate about dancing. Overall, the Varginha native's siblings are successful in their established professional careers and lead comfortable lives.

Besides, not much is known about Ribas' educational background and in which faculty she involved herself.

Amanda Ribas Net Worth And Career

After earning the 2014 IMMAF World Championship title in the women's flyweight division, Ribas began her professional MMA career the same year and mainly fought in Brazil. Before being signed by the UFC, she compiled a 6-1 record.

On July 7, 2017, Ribas was set to fight against Juliana Lima at The Ultimate Fighter 25 Finale but had to pull out from the bout when USADA raised a possible anti-doping violation case against her. However, on May 3, 2019, USADA confirmed that the positive test resulted from an ostarine-contaminated nutritional supplement.

Then, on June 29, 2019, the fighter made her UFC debut against Emily Whitmire on UFC on ESPN 3. In the second round, the Brazilian fighter won the fight via a rear-naked choke submission. Now, let's look at some of Amanda's UFC wins alongside the prize money she earned.

Most recently, on December 3, 2022, the Varginha native was supposed to face Tracy Cortez at UFC on ESPN 42. But shortly after the formal weigh-ins, the promotion announced that Cortez had been removed from the fight because of an undisclosed medical problem, and the fight had been called off. Overall, with a pro-MMA record of 11-3-0, the Brazilian fighter has amassed an abundance of fan following and earned substantial wealth.

Amanda also makes money from various brand collaborations and promotions on social media handles. A few brands she has collaborated with are Gripp Seguros, Acai Summer Official, Beyoung, and Unis EAD, to name a few. In addition, since she has won many bouts and amassed notable earnings, we can expect Amanda Ribas' net worth to be massive. Hopefully, she will lead a comfortable life with her well-earned riches.

Is Happy In Love

Being loved deeply by somebody gives you strength and at the same time, loving someone deeply gives you courage. The MMA fighter, too, is a lover by heart who is blessed with a loving partner, Julio Arantes. The two began dating in 2021 and are head over heels in love with each other. They frequently post photos with one another and look adorable together. However, since the duo prefers to remain private regarding relationships and love life, it is unknown when and where they first met. 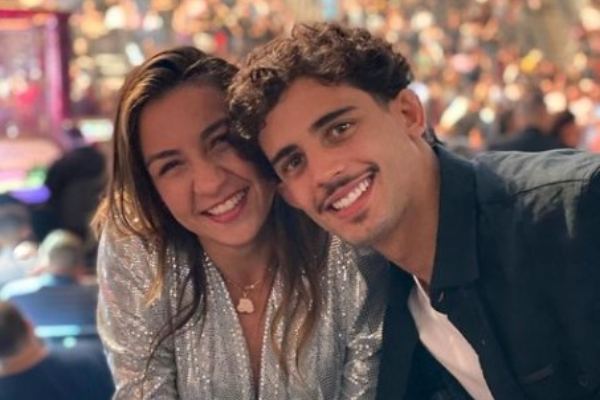 Nonetheless, the couple leads a thriving and enduring relationship. The two also share the same professional background as Amanda Ribas' boyfriend, Julio, is a Jiu-jitsu athlete at Rodrigo Carvalho BJJ. He holds a purple belt in Jiu-jitsu and has secured four victories, two by points, one by submission, and one by disqualification. Julio is a highly supportive partner and is just getting started in the professional fighting scene.

Although Amanda and her partner have only recently begun their adventure of love and life together, we believe they still have a lot of goals to accomplish together. May their love and life rise to new heights. We send them our best wishes.

Overall, by the end of this biography, we believe you got to know your favorite fighter better and draw enormous inspiration from her. The Varginha native is a wonderful daughter, a devoted partner, and a brave fighter, all in one. We wish Amanda Ribas success in her future endeavors and luck in everything she undertakes.